The story of Mayuri, an award-winning handicraft entrepreneur in Jamalpur

She was born into a prosperous family.

But ahead of puberty, Arifa Yasmin Mayuri began feeling gender dysphoria — a conflict between a person’s assigned gender and their identity. As she approached adolescence, she finally realised she was not into typically “boy things”.

Her battle began on multiple fronts as she started living as a hijra or transgender person — facing unimaginable mockery, hatred and structural discrimination in a largely conservative and patriarchal society.

But nothing could stop Mayuri from standing on her own two feet and pursuing her dreams.

After a long struggle, Mayuri is now a successful handicraft entrepreneur in Jamalpur and has won multiple awards, including the National SME Women Entrepreneur Award in 2019 and the Joyeeta Award in 2016. She is the first-ever transgender to win either award.

“Obviously, it has been a difficult journey,” she said.

“My first battle was for my gender identity, and then for livelihood. Now, I am fighting for the rights of my community.

“I know more hurdles will come along. I will have to deal with it and move on,” said a resolute Mayuri.

The 36-year-old has been able to thrive in a country where most transgender people get by on collecting alms or doing sex work amid widespread discrimination. They remain one of the most marginalised groups in Bangladesh despite being officially recognised as a third gender since 2014.

The idea of running a business came to Mayuri’s mind when she was a student at Mymensingh Polytechnic Institute.

After completing her diploma in 2010, she worked at local NGOs for a couple of years to save up before embarking on her dream of starting a business.

“But it was a difficult journey as I didn’t have enough money, experience, or any other support to start a business. My first challenge was facing psychological barriers as many people and even hijra leaders didn’t want a hijra running her own business.” Another challenge was to gain trust. “When I approached people with the business proposal, they didn’t trust me or cooperate with me — terming my efforts a hoax.” 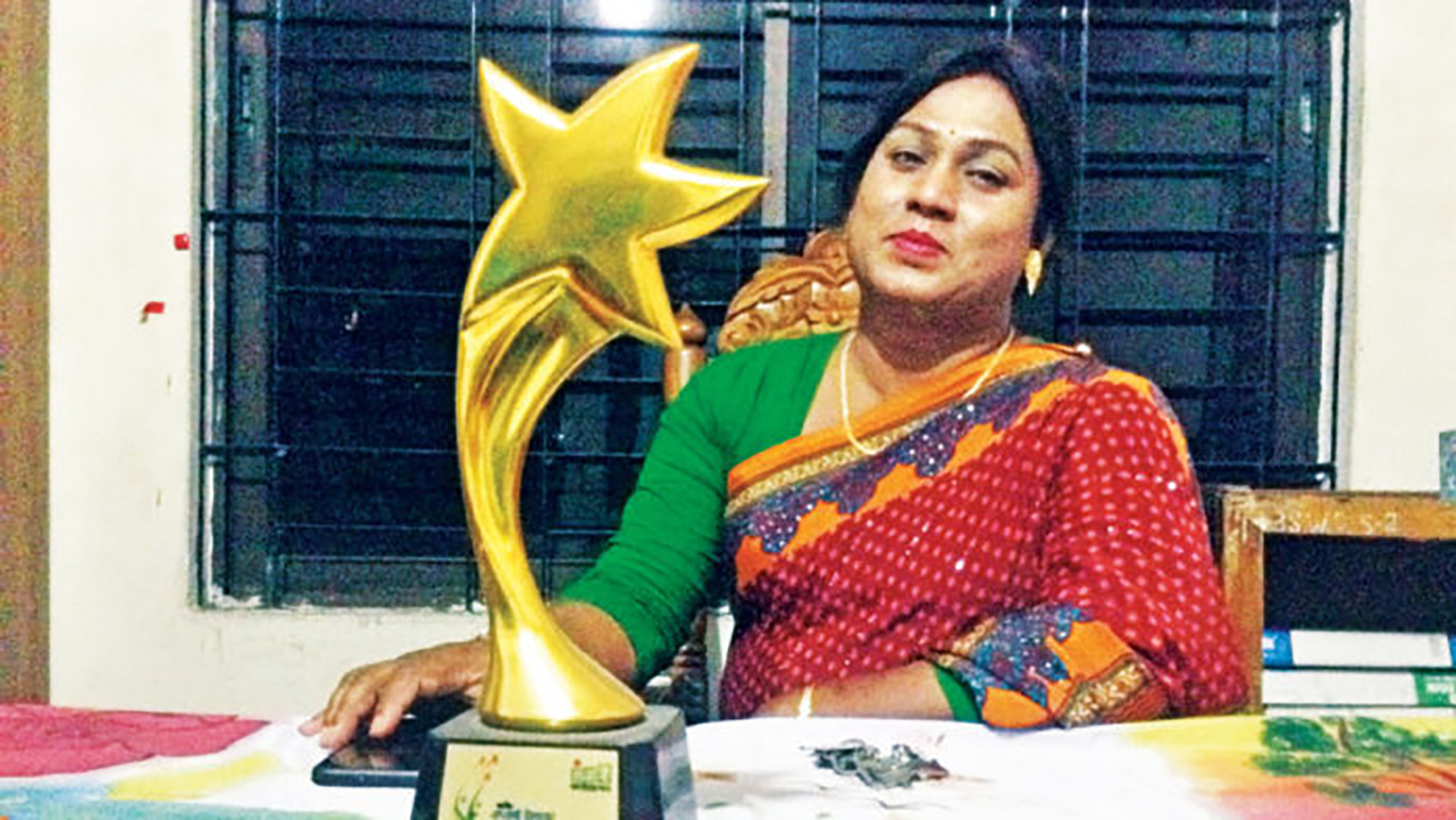 She was turned away several times when she approached factories about producing handicraft items. None of the handicraft factories even allowed inside.

Finally, Mayuri and some other transgender people were able to convince a handicraft worker, who trained the group in mid-2014.

“We started producing handicraft items, including bed sheets, pillow covers, and three-piece sets for women, in a small room which I had rented to live in,” she said.

However, unsure of how to market her products, they would stand in front of handicraft sales centres to approach buyers. But no one took them seriously.

One day, a local buyer initially gave some orders after seeing their samples.

Siri Handicrafts kicked off in March 2016 and gradually, buyers started trusting the fledgling business as it produced quality work.

Initially, they only produced nakshi kantha, but soon expanded to nakshi chador, panjabis, fatuas, pillows and cushion covers, bedsheets, and three-piece sets. These products are now being sold to traders and clients in various districts of the country, Mayuri said.

Expanding her small group of trans-women, Mayuri now employs around 500 marginalised women who work from their homes in different villages. Besides, at least 150 hijras work permanently at her factory in the district town.

She said she received some support from some government officials and political leaders during her journey.

Mayuri was born with the physical characteristics of a boy and was named Arif.

“But I wanted to dress like a girl. When I was six, my father, who was a government service holder, took me to a market to buy a shirt and a pair of pants. But I refused to and insisted on buying a frock. At one point, my elder brother slapped me.”

During her adolescence, she realised that her inner needs were completely like a woman, she said. “I got my answers when I saw other people with similar characteristics to mine.

“I was humiliated and persecuted by my neighbours and relatives. Most of the people in my neighbourhood would stalk me and hurl abusive words. I would always be terrified. People would not even let their children play with me. I was confused, distressed and frightened,” Mayuri continued.

Her family members also faced humiliation and harassment. She had to leave her family behind to save them from being harassed, she said.

“Until I met the people of my community, I had no friends, no relatives, no job, no shelter, and no food. I had nothing or no one except Allah.”

Now, Mayuri knows her rights as a human being and can raise her voice if anyone wrongs her or her community.

Mayuri, however, doesn’t like to be called “third gender”.

“If we are third gender, then who will be the first and second genders? Women or men?” she questioned.

“If hijras are given space and rights, they too can contribute to society. Because they can work just like other people.”

Mayuri dreams of establishing a Hijra Palli – a village to shelter floating transgender people. There will be 100 houses, livestock and vegetable farms, ponds, a mosque, and an open stage where they can share their joys and sorrows, she described.

“It will be a model for other transgender people, who can replicate it in different areas of the country.”

“I want to be a parliament member from a reserved seat for women so that I can work for the development of my community and other marginalised women,” said Mayuri, her eyes brimming with excitement and hope.