The Naxalite who founded Lazz Pharma

Mohammad Lutfor Rahman left the Naxalites after they asked him to kill his father. He arrived in Dhaka penniless, worked at a pharmacy, founded Lazz Pharma in 1974 and moved to Canada in 1992. Today, Lutfor owns four branches of Lazz Pharma and sold the brand name to 65 franchise stores around the country.

One evening in 1972, the streets at the New Market area in Dhaka were abuzz with traffic and buses. Nothing out of the ordinary. From one of those buses, Mohammed Lutfor Rahman and his newly wed wife got down. Lutfor had only a suitcase and Tk250 on him.

“We had already spent some of the money to come to Dhaka. I was worried whether I would get a job or not,” said Lutfor sitting at his office at Lazz Center on the Panthapath road in August 2021.

The couple came from Jessore and they were about to head to a distant relative’s house in Malibagh for the night’s lodging.

The same Lutfor, now a 72-year-old, has a stake in 69 Lazz Pharma stores across the country. The journey of the past 40 years was not smooth though; sometimes, he had to face hard times, sometimes opportunities came like miracles. However, customers are, by and large, happy with Lazz Pharma’s service. 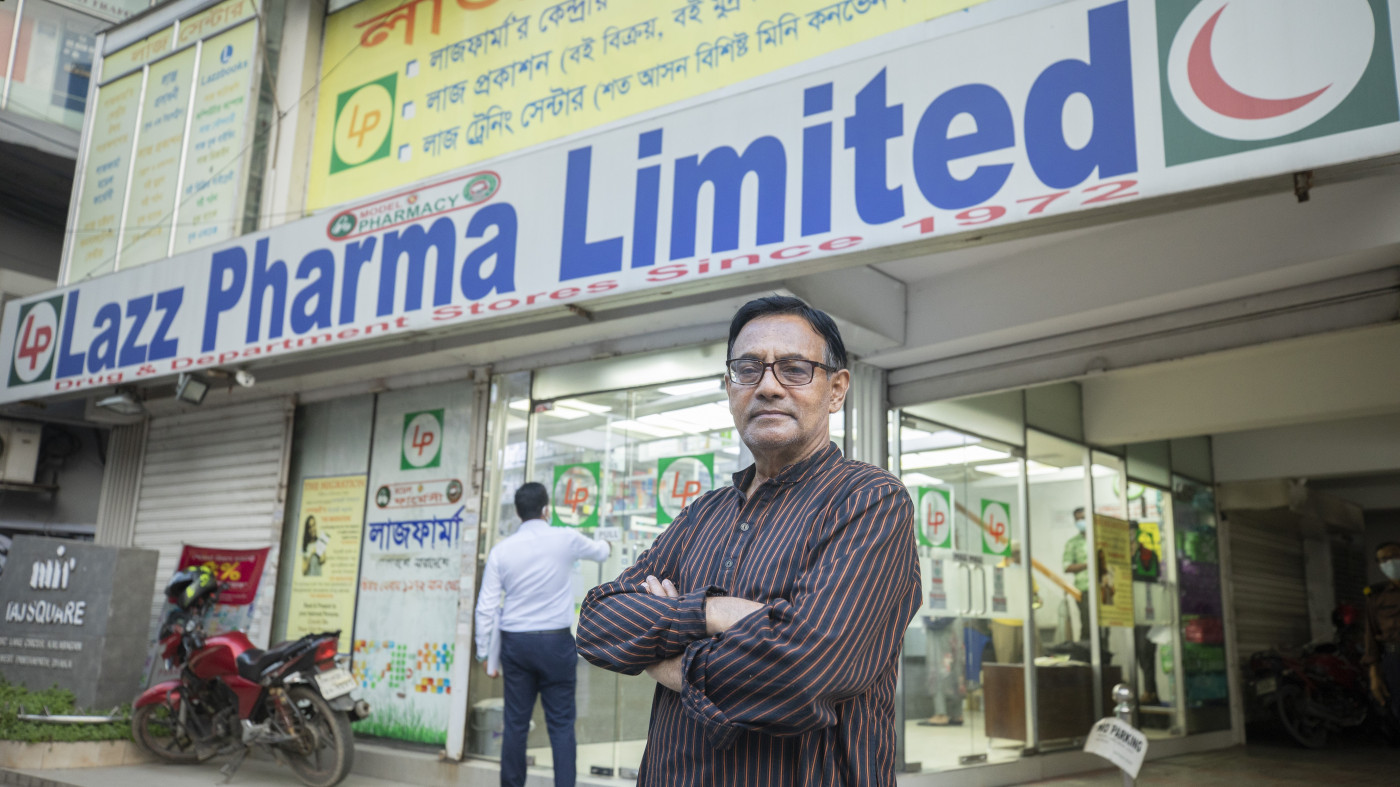 “I had never thought of becoming a drug seller. I came to Dhaka with the hope of securing a job, just so that I could go on living with my newlywed wife,” said Lutfor.

However, after years of trials and tribulations, Lutfor established himself as the owner of the country’s largest drugstore chain shop. Lazz Pharma’s turnover is around Tk1 crore daily and everyday, on average, they serve around  80,000 people, according to Anwar Hossain, General Manager of Lazz Pharma.

Currently, Lazz Pharma has four branches in the city, three in the Kalabagan area and one in Uttara. But there are an additional 65 pharmacies spread out across the city under the name of Lazz Pharma. These belong to 20 different ‘franchises,’ meaning other pharmacy shops or businesses use Lazz Pharma’s name and logo to operate. Each of these franchises paid a single installment of Tk5 lac to Lazz Pharma for this business privilege.

In his childhood, Lutfor was a meritorious student. And so, his father, a jute trader, got him admitted into Jessore’s second most renowned school, Sammilani Institution. Over time, he got involved in leftist politics and became an armed member of the ultra-left radical group, the Naxalites.

It was also the young Lutfor’s political affiliation that stopped him from taking part in the Liberation War, as his party forbade it. At one point in 1971, when Lutfor had already spent some years with this political organisation, the group’s leaders tasked him to kill his father, terming him a bourgeoisie.

“I could not kill my father. So I fled the school and hid in a man’s home, where I started to tutor his daughter,” said Lutfor. They both fell in love and finally married. As an unemployed man, hardships doubled. The couple decided to come to Dhaka to try their luck at finding a life together.

On his second day after arriving in Dhaka, Lutfor went out to look for a friend who lived in the Kalabagan area. He found him. Eventually, the friend helped him get a place to rent to live in Kalabagan. The monthly rent was Tk30 for a single room at the time.

Unexpectedly, his wife became ill after some months. Lutfor took her to see doctor Rashedul Bari.

“Seeing my wife, the doctor burst out into laughter and told me that my wife is pregnant,” recalled Lutfor. But her condition worsened, requiring hospitalisation. Lutfor admitted his wife to Mitford Hospital where the doctor assisted with some free medicine too.

Doctor Bari offered Lutfor a job to work in his pharmacy, adjoining his chambers, on Basiruddin Road in  Kalabagan. He was tasked with buying medicines from Old Dhaka and selling them at the pharmacy-cum-chambers at a profit. That was Lutfor’s induction as a medicine seller.

“There was a crisis of medicine after the war of independence. The price of medicine increased manifolds overnight,” said Lutfor.

He could save Tk6,600 in six months working at the pharmacy shop and started to think of setting up his own business.

One day, in late 1972, Lutfor and a potential business partner set up a pharmacy by the name of Satadal in Kalabagan.

“I sat in the shop but I did not waste time, I began to read books about medical treatment.” However, about eight months later, his business partner told him that he no longer wanted to carry on.

“He asked if I could give him around Tk3,000 for his investment. I paid the money,” recalled Lutfor.

Two years later, in 1974, he shifted the pharmacy to the first lane of Kalabagan and changed the name of the pharmacy shop. And so, Lazz Pharma was born, inspired by his children’s names, La from his daughter Laizu’s name and zz (the Bengali alphabet) from his son Joy’s name.

The miracle of expansion

Four years later, in 1978, he shifted the pharmacy shop to Mirpur Road. One day, a man came to his pharmacy for medicines. At one point of their conversation, the man introduced himself as Lutfor Rahman Sarkar, the managing director of Sonali Bank.

“My blood ran cold hearing his designation. I had been wanting to meet him but never got a chance; and now he had come to me on his own accord,” Lutfor said. 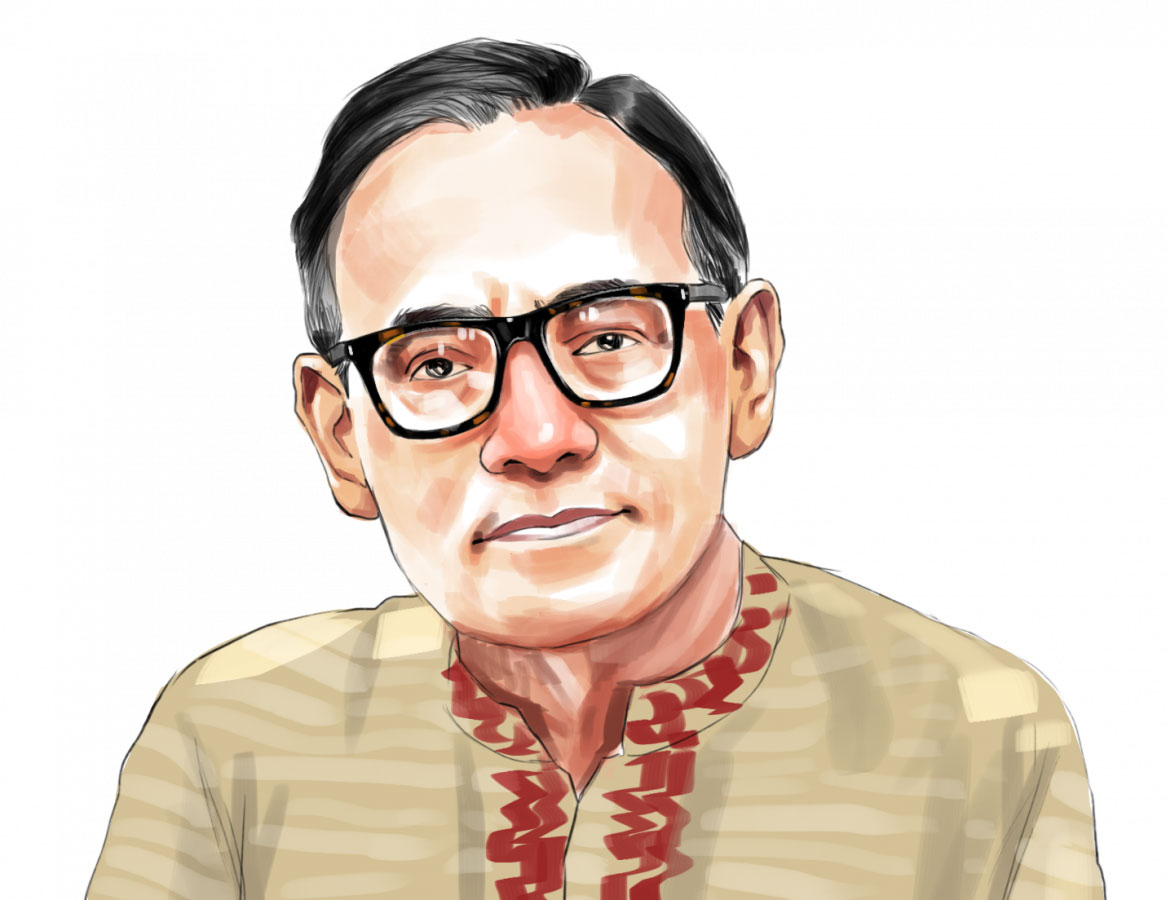 “He asked if I would be able to supply medicines to the Sonali Bank,” recalled Lutfor,  “after I said I would, he asked me to meet him at his office.”

After the first meeting, the Sonali Bank director signed the document that approved Lutfor as their medical supplier. He did so immediately, almost like on an emergency basis, which bypassed any paperwork delays.

On the same day as the signing, the bank director came to Lutfor’s pharmacy in the evening and asked for the first batch of medicine.

“The thing I was trying to accomplish for a whole year, happened in the blink of an eye,” said Lutfor.

After some time, he needed to expand his business due to increasing demand for his products. He needed investment, and fast. With the help of the Sonali Bank official, he got a bank loan of Tk2.5 lac.

The secret of success

When Lutfor got involved in the medicine trade, he became aware that most of the medicine that people were consuming were basically counterfeit or substandard.

“I realized what my father had been taking for many years was not medicine. They were fake. Then I promised myself that I would never sell any counterfeit medicine,” said Lutfor, adding that he has been keeping the promise.

“This way Lazz Pharma has become a symbol of good practices,” said Lutfor.

There was, however, a time in the 1990s when Lutfor decided to walk away because of the rampant unethical practices in the medicine business. He had given up hope.

In 1992, he took his family to Canada, where, eventually, he bought a home. There, he used to roam about in the medicine shops. He found Shoppers Drug Mart, the largest drug retail chain in Canada.

“I was fascinated with the shop. The shop was air conditioned and the medicines were organized in a fantastic manner. I thought I would introduce these things in my pharmacy in Bangladesh,” said Lutfor.

After living in Canada for 10 years, Lutfor came back to Bangladesh in 2002 with a new idea, which he implemented in his store. The decoration, customer service and the new environment began to raise sales.

Lutfor also wanted to start giving permission to other pharmacies to use the Lazz Pharma name and logo, and so the ‘franchises’ came to be.

“However, not everyone gets the permission. Those who, I feel, will work at the service of people get to have these ‘franchises’,” said Lutfor.

Lutfor said that Bangladesh’s pharmacy business is undergoing a massive change. People who are coming to the business now are following the model pharmacy prescribed in government policy.

“Every medicine loses effectiveness if kept above the temperature of 25 degree Celsius. Shops which are not air-conditioned cannot give you standard medicine,” said Lutfor.

Lutfor has written some pamphlets in which he wrote about pharmacies and the temperature for keeping drugs. Not only medicine pamphlets, he has written novels on the side of his business too.

“I love to write, whenever I get a chance, I spend time writing,” said Lutfor, who is preparing to write his autobiography.

In 2020, RAB conducted an operation and fined the pharmacy for keeping expired medicine in the Kalabagan Branch.

“Where shall I keep the expired medicine? They were packed in cartons. That was not for sale,” said Luftor, disappointed and even outraged with the incident.

In another incident, law enforcement agency members conducted a raid on one of its franchisees in Kakrail and found unregistered medicine. Lazz Pharma authority suspended the franchises for some time.

“This incident is saddening. But I don’t think it had any negative impact on our business,” said Lutfor.

Lutfor’s future plan is to spread the model pharmacy concept across the country so that people can get standard medicine.

Interestingly, Lutfor does not take any Bangladeshi medicine. “When I go to Canada, and as a Canadian citizen I get medicine for free,” Lutfor explained,  “I take those free medicines all-year-long.”