Tanveer played blind cricket for the Yorkshire County team, produced rap music, learned seven languages, has two masters degrees, is pursuing a PhD at the Florida Institute of Technology and won both the student and employee of the year award. He has ‘all-rounder’ written all over him. Yet, the tale of this legally blind man’s journey to overcome all odds has ‘shattered dreams’ written all over it.

2012 was supposed to be an exciting year for Tanveer Syed, a legally blind Bangladeshi young man about to graduate from the University of Leeds. He expected a job on a post-study work visa the UK government offers to international students.

“I literally screamed down the road. I was so close to getting a job and becoming self-dependent. And yet it was taken away from me,” Tanveer told The Business Standard recounting how his dreams dodged him so up-close.

Tanveer is now a PhD student at the Florida Institute of Technology. This year at Florida Tech, he won both the student of the year and student-employee of the year awards.

If his research is successful, he will be the first-ever legally blind person to research improving virtual reality technology for people with low vision like himself.

But his success today as a visually impaired person rocking the Florida Tech campus took a long, arduous journey.

In an interview with The Business Standard, Tanveer opened up about his stories, dreams and challenges as a visually impaired man.

Born and raised in Abu Dhabi, the United Arab Emirates, Tanveer’s vision loss problem was confirmed when he was four-years-old.

The doctors said he would go blind by 15.

Although appalled by the news, Tanveer’s doctor and engineer parents did not give up on him. They raised him as a regular child and sent him to regular schools. 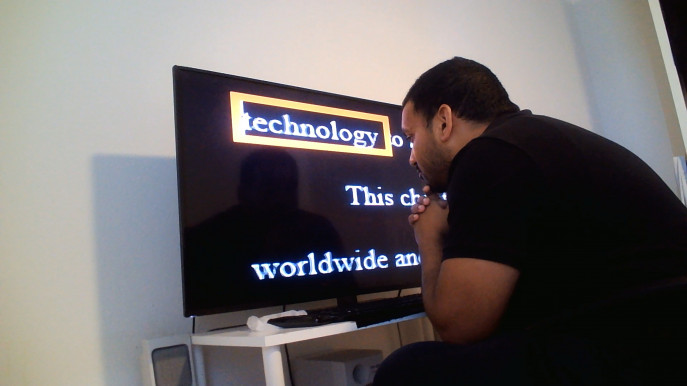 Back in the mid-90s, the educational curriculum was not that advanced and convenient for visually impaired students. It was regular books; someone would have to read them out for Tanveer and he would memorise everything.

He continued studies in myriads of ways – cassette recordings, reading books through binoculars like in detective movies, etc.  During exams, his teachers would read  out the questions to him and someone would write down the answers for him.

But all these efforts had their limitations. As Tanveer began to grow older, he was doing very poorly in exams. At the same time, the schools also found it increasingly difficult to teach him.

“I want to be a doctor,” hope returned with a new technology

However, hope returned when Tanveer learned that although his eyesight would continue to deteriorate up until he was 15, leaving him a legally blind person, the vision loss would stop there.

He would have a tiny bit of vision left, not enough to study like regular children, but at least he would not lose his eyesight entirely.

In 2002, he was introduced to a new technology. It was essentially a platform with a mounted camera on it.

“You put your books under a camera, connect it with a box television and it will magnify the text on the TV screen for you,” Tanveer explained.

“All of a sudden, my grade improved from one of the worst in the class to one of the best in the school! My performance was brilliant, especially in mathematics, biology and chemistry.  So far so good. I received the Sheikh Maktoum Award for special achievement!”

Things were going great for Tanveer. He now wanted to be a doctor like his mother. He always had a fascination with biology and how the human body works. “I wanted to help people. Being able to help people is nice,” he said.

“I cannot be a doctor,” reality weighs in

Despite passing O Levels with distinction, Tanveer struggled to get admitted to A Levels. No school in Abu Dhabi wanted to take him in.

Tanveer recounted, “The school that finally agreed to take me in did so because my elder brother graduated from that school and he had a tremendous reputation as a brilliant student.” 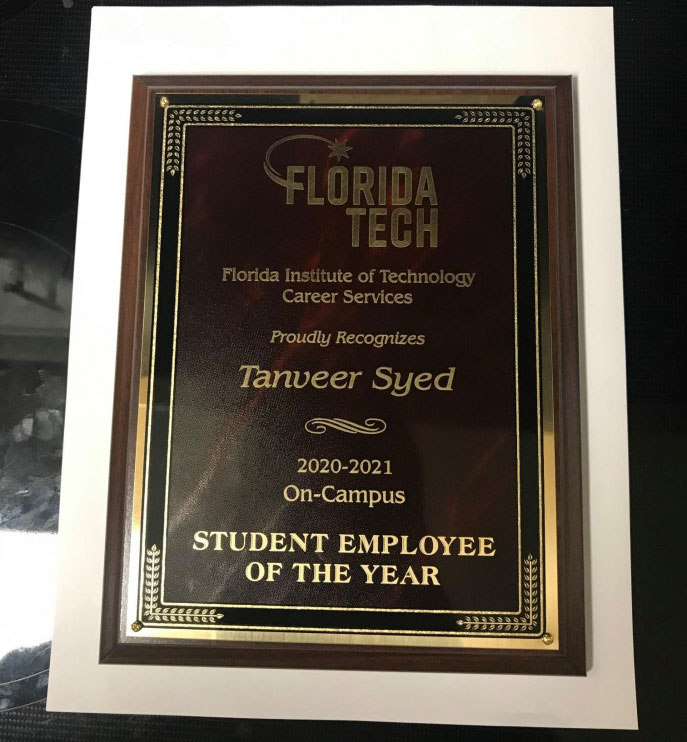 Tanveer got a job at Florida Tech and won Student Employee of the year award.

During the very first chemistry class in his new school, the teacher drew a graph on the board and asked the students what it was. When nobody answered, Tanveer said he went very close to the board, looked at the drawing for five minutes and told the teacher that it was “activation energy”.

The teacher was so impressed that he said in 40 years of his career, Tanveer was the first student to solve the graph in five minutes.

And yet, the teacher asked him not to take Chemistry. “I am an old man. I cannot manage the extra time you require.

Besides, there would be lab work that you cannot manage,” the old teacher told Tanveer.

“I was getting increasingly frustrated. With a little help, I became the best student in the school and yet, everyone acted like they did not want a burden; as if they were doing me a favour by teaching me.”

After he passed A Level, Tanveer said that every university in the UAE turned him down as he wanted to study science.

“Then one day, when I was having dinner at a restaurant with my family, I had this epiphany that I realised I could not be a doctor,” he said, as if accepting for the first time that he was blind.

“I will be a teacher”

Accepting the reality of his vision loss problem, Tanveer set a new target. He wanted to be a teacher.

So he started studying biomedical science and human physiology at the University of Leeds in West Yorkshire, England, in 2008.

“By the time I graduated in 2012, I realised that a legally blind person could live an independent life. I was looking forward to this life because you cannot live a sheltered life forever. Otherwise, you start to feel claustrophobic.”

Tanveer continued, “There was a time when I could cross a road by myself. There were machines that would tell me when to cross the roads. It was so precious to me!”

In Leeds, life unfolded its colours to Tanveer, one by one.

Shortly after setting foot in England, he became a part of Leeds’ student television and radio, co-hosted a show, earned a yellow belt in martial arts and produced rap music.

Besides, he played blind cricket for Yorkshire County.

“Domestic blind cricket is magnificent,” Tanveer explained, adding, “You bowl over the arm and the ball is the size of three footballs. I used to practice balling in the net with the regular Leeds team. But I couldn’t bat.

“My concept of bowling was to focus on the straight line of bowling and the batting wickets. 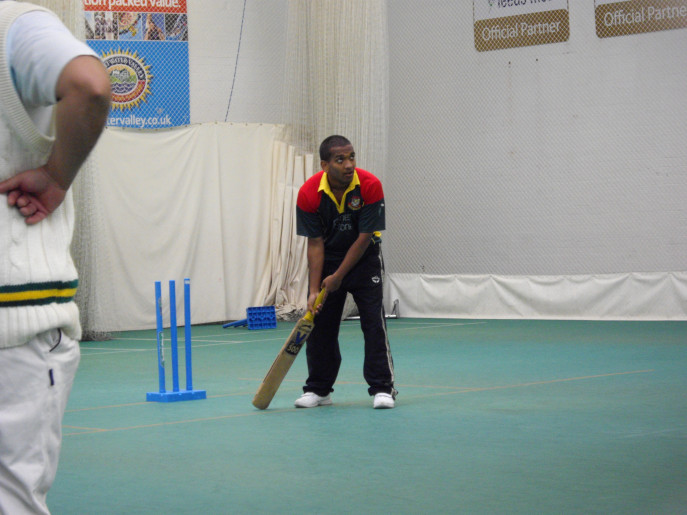 If you can imagine the straight line, you can bowl. You just need to know if the batsman is a left-hander or a right-hander. I used to use that as a reference point.”

Tanveer said they won a championship every year from 2009 to 2013 for the Yorkshire visually impaired cricket team.

“2012 was the most prosperous year. I believe we won both a championship and a runner-up title that year,” he said.

“I cannot become a teacher”

However, his cricket coach from Yorkshire County visually impaired team was a professor of microbiology at the University of Bradford. The professor helped him get into the Master’s program at Bradford.

But after completing his Master’s, reality “struck him like lightning.” As a visually impaired person, he could not manage to get a job in the UK.

Tanveer said, “All the doors were closing for me. By that time, my father had retired but my mother was still working to support me.”

He later enrolled in a new Master’s degree in education at George Washington University (GW) in the US that would automatically give him a teaching license. He set up a new home in the US with his elder brother’s help.

But after two semesters (it was a four-semester master’s program), Tanveer was informed that he could not be a teacher because he would not be able to manage a DC public school.

“After my second masters, I still could not get work except for a two-month-long voluntary work at the museum of natural history as part of my course,” recounted Tanveer.

In the meantime, Tanveer was accepted as a PhD student at the Florida Institute of Technology.

When he informed this to his professor at George Washington University, she was so happy that she said, “When I first saw you, I knew this guy had a PhD written all over him.”

“I never thought people had so much expectation from me. My professor said I needed a PhD because I deserved a PhD,” Tanveer said, beaming as he mentioned the bright memories with his professor at GW. 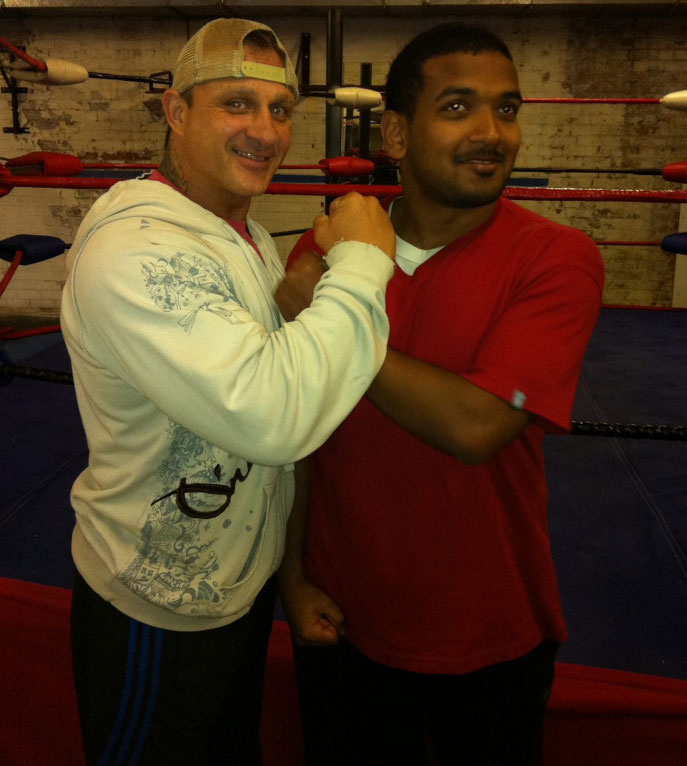 Tanveer with his boxing trainer.

“The bane of my studying science was because I could not do lab work. Now you have all these virtual labs. Some of them are coming up with features for visually impaired people. But the solution they come up with is the equivalent of telling someone else to do the experiment for you or to experiment with your eyes closed.

“If it becomes successful, I will be the first visually impaired person to do this sort of research and I am very grateful to Florida Tech for the opportunity. Especially my current supervisor, who never hesitates to go the extra mile to assist me, even while collecting my blind certificate when I applied for a scholarship,” Tanveer sounded grateful.

“By being disabled, you are cursed to suck the life out of everyone you care about,” Tanveer’s mother expires

On 15 July 2019, Tanveer’s mother suffered a second stroke. She passed away last October.

“She actually suffered the second stroke while at work trying to support me – her disabled child,” Tanveer reiterated.

“Disability is a curse. By being disabled, you are cursed to suck the life out of everyone you care about,” Tanveer breaks down as silence grips us for a moment.

“In third world countries, children with disabilities are locked in bathrooms and considered an embarrassment. In some poorer countries, they are even killed. But my parents did everything they could do for me.

“Now I realise that it was not my decision, but at that very moment, it was very difficult,” Tanveer continued.

“I’ve got a job and won both the employee and student of the year award,” life moves in the right direction

Florida Tech was the first-ever institution to offer Tanveer a permanent position as an employee in 2019.

In 2020 he started to become a star performer for the department. Tanveer said that unlike the UK, the US has a more result-driven, pragmatic system.

“You can talk well, you have passion and you have skills,” Tanveer said while explaining why being visually impaired did not matter to his current employer.

He continued, “I work as a fundraiser for Florida Tech’s office of development. During the last pandemic year, when all universities shut down, we went totally virtual. This benefitted us so much that our department received a state award because of reinventing development. Recognising my success, they got me a 50 percent pay raise in 2021.”

Tanveer’s employer recognised his contribution by awarding him the student-employee of the year award. “As my GPA has remained consistently continuously good, they awarded me the student of the year award, too. My elder brother, who is also doing PhD in Florida, also got this award with me,” Tanveer said.

For Tanveer, things are slowly but surely moving in the right direction. “I wish my mother was around. I wanted her to see both of her children with this award on the stage.”