When Sarah Krasley was flying into Dhaka airport last month, she was overjoyed. She remembers seeing the green fields, rivers and the bright clothes on clotheslines on the roofs. She was finally back, “I was here [Dhaka] right before the pandemic hit and we couldn’t get back. This trip [March 2022] is particularly mishty,” said Sarah.

Sarah Krasley is the founder and CEO of Shimmy Technologies, headquartered in New York, a maker of industrial ed-tech for factory workers. And over time, the start-up (founded in 2016) made its way to Dhaka in 2018 and established partnerships with factories.

“As a little girl growing up in Pennsylvania, I had no idea that Bangladesh would be such a big part of my life,” said Sarah in a zoom interview during her short trip to Dhaka in March, “That it would be a country I talk about, have meetings about every day, regardless of where I am.”

Shimmy aids and upskills factory workers with the technical skills required to sustain jobs in the age of automation through gamification.

Sarah stresses how automation is underway, and a reality of this transition is that ‘advanced’ job roles – that involve the handling of machinery – in factories are going to male employees. 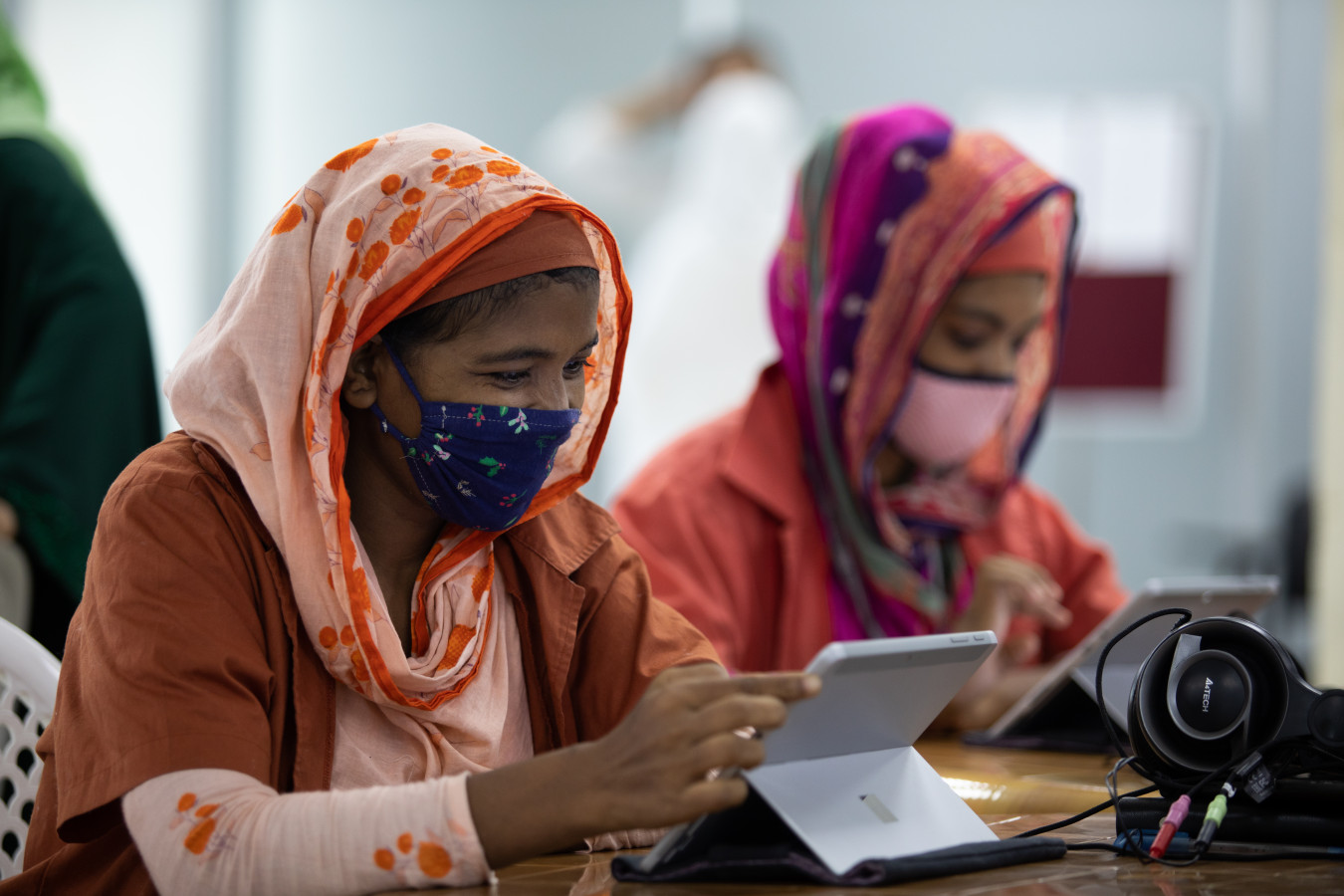 Shimmy Technologies founded in 2016 made its way to Dhaka in 2018. Photo: Courtesy

As a result, female RMG workers are getting left behind. A 2019 BBS survey says that the number of female workers is only 46.18 percent in the sector, and in a 2019 Forbes report, a CPD study was cited saying women historically made up 80% of the RMG workforce in Bangladesh, but automation has seen this figure reduced to 53%.

How does Shimmy Upskill work?

Shimmy Technologies developed Upskill. It is a 4.5-hour video game-based application that runs on a tablet. Once a partnership or collaboration is established, Shimmy typically first talks to factory management and learns what machines the factory has, their plans to buy machinery in the future and what skill gaps are present in the workforce.

Then they design “relevant” modules that “we deliver on our tablets,” said Sarah. Shimmy’s trainers (which is, at the time, eight female advanced machine operators) go to the factory, set up the tablets and train the workers. “Workers log into the game with their mobile phone number,” added Sarah.

The trainees also participate in Whatsapp groups where they can ask career-related questions to Shimmy. “They also sign up for our TikTok channels,” said Sarah, where “the trainers give them byte-sized lessons on machine maintenance.”

So far, Shimmy Technologies trained 1,468 RMG workers; and 70 percent are female. And currently, pilot programmes are ongoing in five factories.

Along with training and field operations coordinators, machine trainers and country lead, Shimmy also has an industrial engineer on staff. “Because the way the factories see the value in this, is that Shimmy is helping to drive efficiency. So being able to calculate that, being able to see how process flow is improving [is vital],” said Sarah.

What is the effect of having female trainers? “I have learned in my own life that it is very hard to dream and imagine yourself somewhere if you don’t have an example,” said Sarah, “So that’s been really inspiring for the workers we have talked to.”

The impact is far-reaching

This type of training and work seems to have a deep impact beyond the job market. “What I underestimated is how technical skill training in an advanced machine actually has a broader echo effect,” said Sarah, who heard from a few workers on this trip and batches of workers from years prior about how the training, eventually, leads the women to gain confidence at home too.

“Our trainers are not only helping them with advanced machine skills, but they are [also] teaching them how to press, and swipe and tap; like all the things you and I do a thousand times a day. They have never done it before. Workers are scared that they might break the tablet,” said Sarah. And after the training, some of the women no longer feel intimidated to use their household’s only smartphone.

From Allentown, Pennsylvania to Dhaka, Bangladesh

Born and raised in Allentown, Pennsylvania – the same town Billy Joel sang about and made famous – Sarah Krasley noticed, at very close and personal proximity, the impact of automation and technology on the steel mills industry.

“My grandfather, uncles and dad worked in the steel mills. When I was little, the plant closed down [and] because it didn’t adapt to technology in a way that brought workers along with the change, hundreds of thousands of people were laid off. And it took decades for my hometown to recover economically,” said Sarah.

This memory coupled with Sarah’s fascination with how things are made led her to think, a lot,  about the role of technology in that change.

Sarah worked across different manufacturing industries like automotive, furniture and consumer electronics, and closely saw how automation was being brought in and how labour needed to come along with that shift. 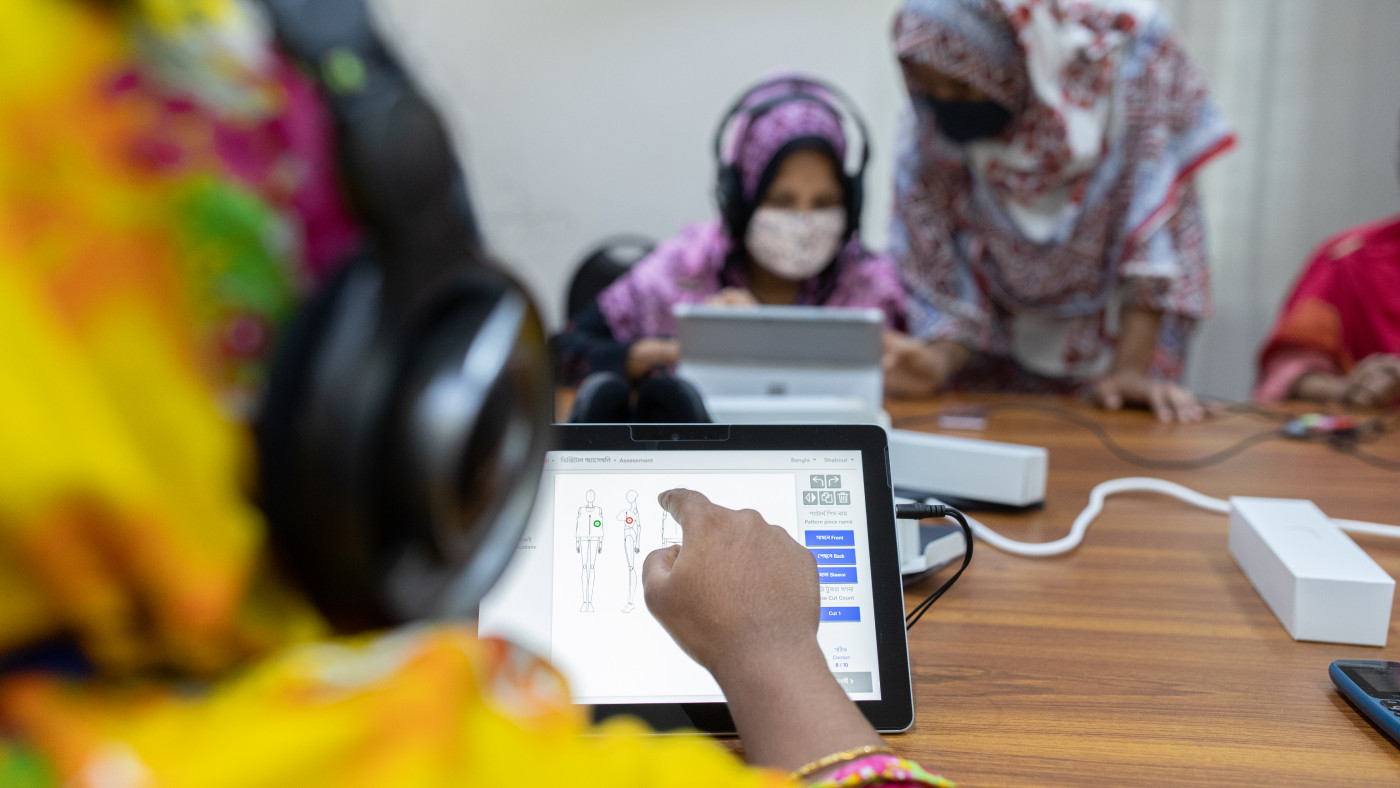 And then in 2016, Sarah founded Shimmy. “We pitched to a lot of different factories,” said Sarah, to start the pilots, “And the very first ones that said yes were Bangladeshi factories. The others were like ‘This is too crazy, or you know, this is not how it’s done.’ And here, there was this attitude of yes, this isn’t how it’s done, but you know what, let’s try a pilot and what’s the harm in that.”

In May 2018, the pilots were launched as a test run in Jackson Heights and Kensington – the two major Bangladeshi communities in New York.

“It was a lot less expensive to take the subway to Jackson Heights than to take a flight to Dhaka,” said Sarah, so they went there with their first prototype.

Sarah and her team worked with a few community organisations that welcome new Bangladeshis to the neighbourhood, “And we were able to find some new immigrants who had some RMG experience,” recalled Sarah. “So they were our first patient beta testers and they told us what was working and what wasn’t.

And then we were able to make those changes and get ready for our first pilots here [Dhaka].” And in July 2018, Shimmy came to Dhaka.

Sarah’s relationship with Bangladesh dates back to 2013, the year of her first trip to the country on the back of the Rana Plaza collapse. “The first trip, I embedded with an organisation [called] Change Associates Ltd that does leadership and soft skill training for garment workers,” said Sarah, “They really opened my eyes to what is useful to garment workers and what can be supportive.

And I think a lot of my ideas, before coming, embedding with them, was way off. So I am grateful to them for giving me that lens, in the beginning, to see the world through. That trip was really transformational.”

Sarah took Bengali cooking classes and also started to learn the language. “I can read the English characters that say the Bangla phonetics,” said Sarah through her chuckles, “I will get there, I promise.”

Automation and the Covid-19 pandemic exacerbated labour shortage. Shimmy carried out research during the lockdowns and one of the findings highlighted a decline in females sticking around. “If only one person can take a job, then the husband has the pride of going and being the breadwinner,” said Sarah.

“Moreover, the labour shortage is creating an increase in advanced machine and automation purchases. We need to make sure they [workers] know how to run them. Also that there is equal access to those jobs because, right now, they are mostly going to male workers,” said Sarah, “And we got to help female workers to feel the confidence to try that training and spark that imagination to want to move on to that career path.” 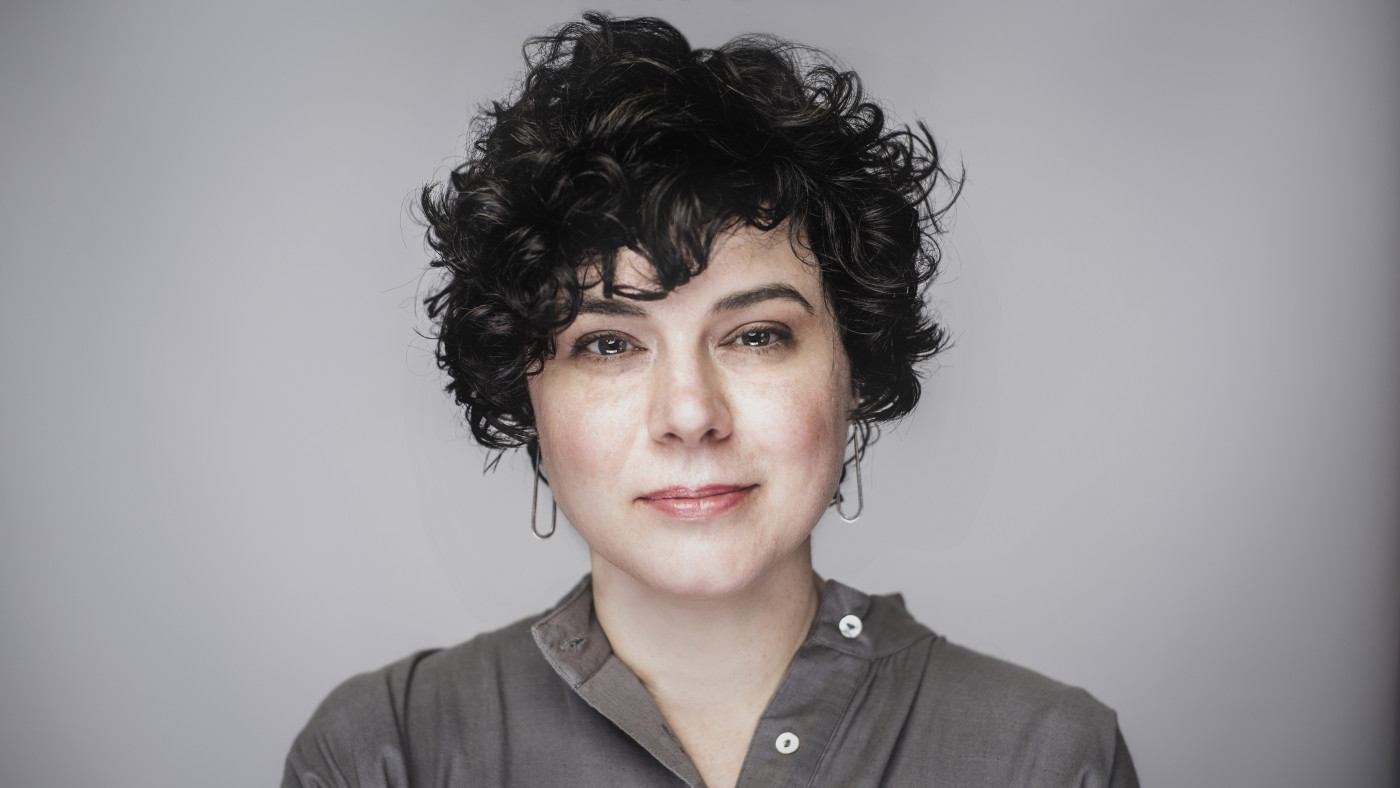 Training can be the first step into the job market and then there can be a better chance that the worker will stick around, according to Sarah.

In many cases, there is resistance to upskilling workers which stems from short-sightedness. For instance, what if workers “jump to another factory” and “it will cost me more money.”

However, “every time I come to Bangladesh, I meet more and more visionary factory owners who understand that it [upskilling] is a strategic perspective,” explained Sarah because workers can run machines more efficiently and “it’s better for the business in the long run.”

After the first round of pilots in Bangladesh back in 2018, Shimmy also travelled to Indonesia and did pilots there too.

Will you continue operations in Indonesia? “Perhaps. I think we are all in [on] Bangladesh. We are going to continue scaling here. We have an amazing team here. This is where we really want to anchor our South Asian business.”

She further added, “I can eventually see Shimmy carrying out [operations], in years to come, in VR, in the metaverse. But for now, the appropriate technology is a tablet.” And as the RMG industry looks to diversify into other segments, Sarah too envisions expanding their outreach to other sectors.