Ordinary people sometimes go through extraordinary events that completely upend their lives. In our Surviving an Extraordinary Event series, we aim to tell the stories of these people and how they persevered after such events. In the first instalment of this series, we bring to you the story of a Dhaka University student, Samin, who lost his legs to an unfortunate accident. But 14 years after the accident, Samin continues to flourish.

Lying on a stretcher, a slim young man with his lower limbs crushed was pulled by a woman, probably an ad-hoc nurse of NITOR, towards the operation theatre. While he stumbled in and out of consciousness, he overheard the woman’s cry: “Which mother’s son are you?”

The nurse, a mother herself, could not hold back her tears. The sight of a blood-smeared Dhaka University graduate student Saiful Samin, who survived a rail accident a few hours ago, was difficult to witness.

His limbs from the knees below were crushed by the train’s wheels. The surgeons had to amputate his right leg up to the middle part of his thigh to prevent infection, and a part of his left leg as well. When Samin regained consciousness after the first surgery, he saw his classmate and friend Atiq standing in front of him. “I am finished,” was Samin’s first sentence.

Born to a middle-class family, Samin grew up shouldering the expectation that he would take on the responsibility to provide for the family one day. And when he realised that he had become handicapped, frustration gripped him firmly.

But Samin broke through. He emerged from this tragedy akin to a phoenix rising from the ashes, not only by overcoming destabilising frustration, but also by defeating the trauma that would have, otherwise, ruined his life forever.

Here is his story.

When Samin was a student of Mass Communications and Journalism at the University of Dhaka, he worked as a contributor for the reputed Bangla daily Prothom Alo. His investigative reports about civil life in the Dhaka metropolis brought the city corporation’s flaws to the fore.

Once he was assigned to dig into the civic problems around the Tejgaon area. 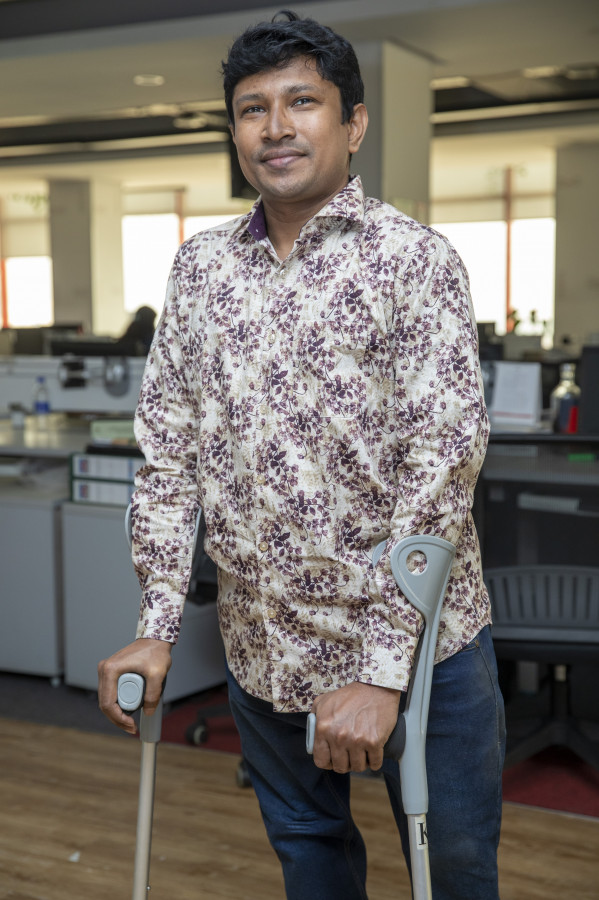 On June 20, 2008, Samin dilly-dallied to step out of his university dorm. After all, it was drizzling that Friday morning. As a contributor of Prothom Alo, Samin was asked to go to Tejgaon with a senior colleague to follow up on a clue tied to the illegal drug trade in the area.

“I was crossing the rail tracks at the Tejgaon Rail Station from east to west. I didn’t stop when I saw an approaching train because it was far away. Suddenly, one of my legs got stuck to a rail track. And I couldn’t free myself,” Samin said, murmuring that he did not want to relive the moment.

Hearing the news, Samin’s colleagues arrived on the spot and rushed him to the Pongu Hospital (NITOR). A cordial orthopaedic, Arif Anwar, even donated blood to keep his patient alive.

Samin stayed at NITOR for three months and underwent approximately four separate surgeries. By the end, his left leg was almost wholly amputated. It took a lot of perseverance for the 5.5-feet-tall young man to fathom that he had lost almost half his height. 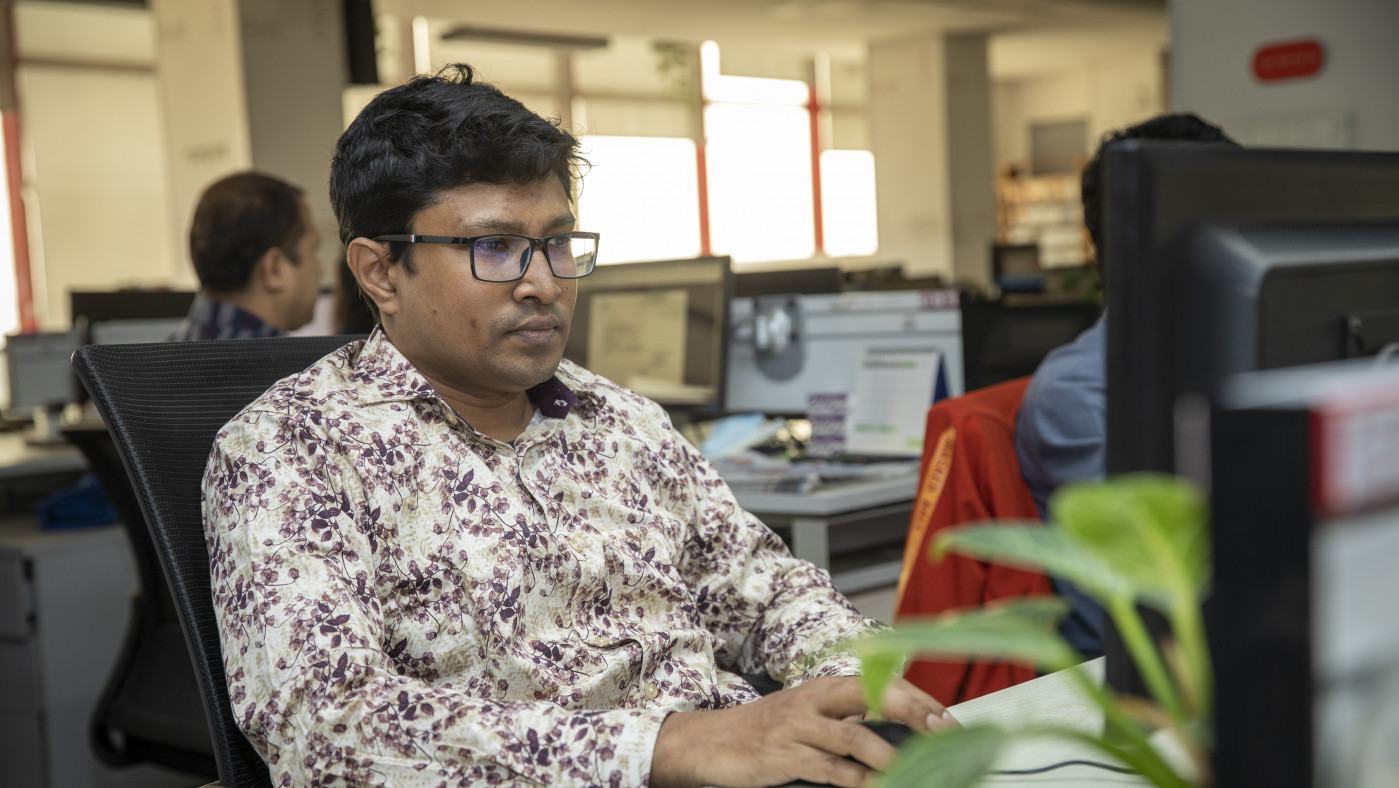 “I spent my days at the hospital sedated most of the time. The few hours I remained awake, I read books. My friends and teachers supplied fiction I would love. One of the teachers, Naadir Junaid [now a professor], gave me Shikhor Theke Shikhore by Sunil Gangopadhyay. The story of a struggling army man inspired me the most. And I learnt that life is not for living with grief,” Samin said.

Perhaps it was also the grit from his childhood that allowed him to overcome the challenges that then pushed him to go forward in 2008.

Samin was a meritorious student of KM Latif Institute at Mathbaria, Pirojpur. Although he loved sports, he never won at competitive sprinting until the last sports week of his school life.

“One of my schoolmates always won the race. Why not me? I took the challenge for the last time. Every morning I jogged. And finally, I snatched the first position,” recalled Samin.

And later on, his indomitable spirit also led him to secure first class in his graduation and post-graduation. He did not take any breaks during his studies despite attending occupational therapy and rehabilitation for nine long months.

The rehabilitation phase was a crucial period. Wearing a heavy artificial limb requires strong support from the hip bones. But he had lost almost the entirety of his left femur because of a series of amputations. And his hip joints suffered from a loss of flexibility because of the prolonged stay in bed.

And when Samin reached out to a German organisation working on rehabilitation, they said he could not bear an artificial limb.

“Endolite Bangladesh – a Bangladesh-India joint venture came forward and took up the challenge. Every day I attended their therapy sessions and in phases, my hip joints relaxed. After a series of trials with training limbs that Endolite provided, I succeeded in walking,” Samid said.

His rehabilitation was expensive. But the uneven path turned smooth because of his friends’ crowdfunding efforts, and also because his employer Prothom Alo took care of most of his treatment expenses.

Samin said, “Prothom Alo paid me a special allowance during the rehabilitation period and onwards so that I could continue studying.”

In August 2010, Prothom Alo Editor Matiur Rahman appointed Samin as a permanent staff of the newspaper. And after more than 12 years, Samin is still attached to Prothom Alo as a senior sub-editor. During his journey with the newspaper, he was awarded, at least once, as the best employee of the year.

Besides carrying out professional journalism, Samin, now in his mid-30s, loves to write non-fiction. So far, he has co-authored three academic books, with the latest one on online journalism titled Online Sangbadikota Path O Proyog.

In late November last year, Samin toured Cox’s Bazar with his parents. And he swam with the butterfly stroke in the hotel pool without his artificial limbs. As a child of southern Bangladesh, swimming was instinctive.

“After the accident, the Cox’s Bazar tour was my first outing in 14 years. I was so happy. And I felt joyous while swimming. Nothing is impossible,” said Samin, beaming.

To his university friends, one of Samin’s most distinctive characteristics is his smiling face. During his interview with The Business Standard, his friends’ characterization proved true. Samin appeared as a jovial and positive person. If not explicitly told, you would never know of the extraordinary event that Samin survived and still built a happy life.