Reve: The country’s first antivirus maker is ready to take over the Chatbot market

Having built its reputation as a leading IP technology solutions provider, Reve launched the country’s first antivirus in 2016. With the boom in online businesses in the country, Reve sees chatbots as its next frontier

Reve Systems is not a new name in the Bangladeshi B2B tech industry. Most tech-savvy people know their name and journey from a garage-based company to a multinational tech company.

Since its inception in 2003, Reve has become one of the leading providers of Internet Protocol technology solutions. So far, Reve Systems’ solution has been used by 4,500 telecommunications companies and 80 million end-users from 78 countries.

Over time, the Reve group expanded to other sectors. They started providing antivirus software in 2016 and made AI-based chatbots in  2020.

“We started Reve Systems with a focused approach to serve the IP-based communication industry.

When we started, I saw an opportunity in providing billing solutions to the VoIP industry and started working on that idea,” said  Rezaul Hasan, the founder and CEO of Reve Group.

Eighteen years and on, Rezaul’s venture is thriving. 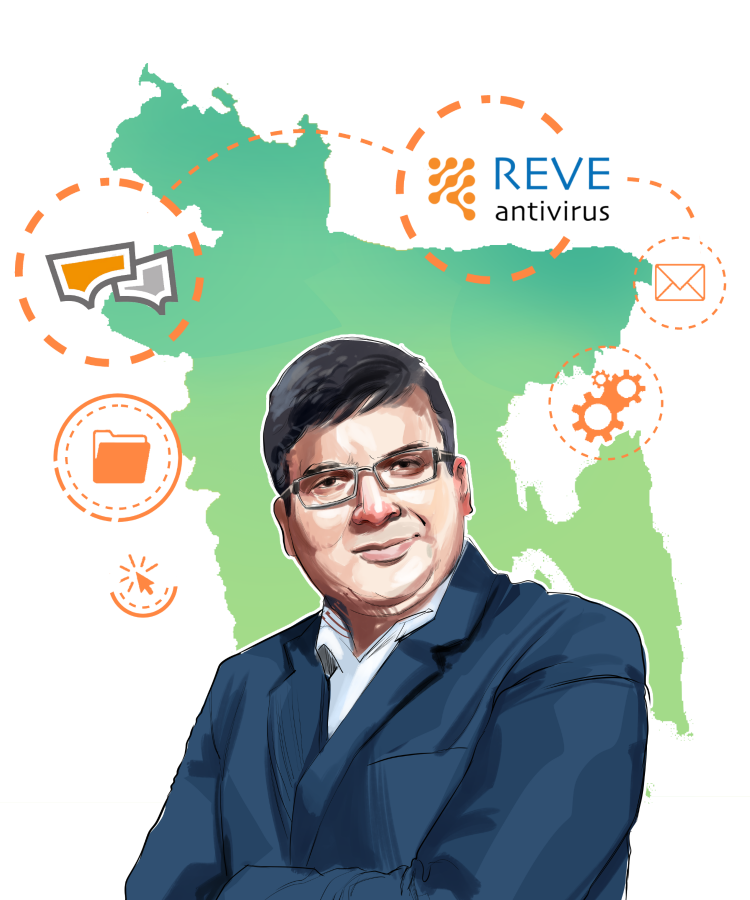 Rezaul Hasan, the founder and CEO of Reve Group founded the company in 2003. Illustration: TBS

“In terms of the IP Communication industry, Mobile OTT and Unified Communication are two areas, which have tremendous potential. Growing smartphone penetration with 5G gearing up, mobile OTT is the next best thing to capitalise from an investor’s point of view. Moreover, the world will see more investment in cloud communication and collaboration solutions in the coming years.”

Reve Chat, their second-largest product, is an AI-based communication platform that offers a complete suite of live engagement tools to deliver faster resolutions via personalised conversations.

Chatbots are undoubtedly a great piece of technology with the potential to truly redefine the landscape of customer communication and automation, according to Rezaul.

He justified their engagement with Reve Chat by saying that businesses from across industries now leverage bots to successfully drive the bulk of customer interactions and marketing strategies, and thanks to the virtually endless capabilities of AI-based computer programs, bots are now a reliable and trusted technology suited to a plethora of roles and tasks across industries.

“Together with that, we also need to understand that Bangladesh has recently seen a boom in online-based businesses and services. As the trend continues, online customer service becomes a vital point to look at, which makes the chatbot market in Bangladesh a very promising one.

In fact, not only Bangladesh but the whole subcontinent is looking into chatbots at the moment. And there is no reason why this trend cannot continue for years to come,” explained Rezaul.

Reve Antivirus, the only antivirus brand from Bangladesh, first launched in 2016. It ventured into the Indian and Nepalese markets in 2017 and later into Africa as well. In 2019, it further expanded distribution in European countries. And currently, it has users in 150 countries around the world.

Reve Antivirus’ Endpoint Cloud is designed to ensure maximum security to the enterprises with its anti-ransomware technology, zero-day protection and activity monitoring among other advanced features.

Along with these, Reve Systems is a proud contributor to the Digital Bangladesh vision of the Bangladesh government. Since 2015, they have been contributing to multiple e-government projects.

Among recent projects, the Online Birth and Death Registration system for Local Government Division Bangladesh was developed by them.

Grievance Redress Software System and Mobile Application Development, under A2I for the Cabinet Division, is also one of Reve’s projects.

Recently, BTCL launched an app named ‘Alaap’, and Reve Systems provides this solution. The app has seen almost 10 million downloads in only six months. There are also plans to make this an over-the-top (OTT) platform in the future.

“Working with anything which can directly reach the mass people of the country is always exciting. We have been working with the Bangladesh Government for a few years now, and our experiences have always been excellent,” said Rezaul.

In the tech world, innovation is the key. It does not matter where the company is from, or where it is located. And Rezaul believes that many new Bangladeshi tech companies are emerging now that can compete in the global market.