One Taka Fund: A charity that relies on trust

The organisation provides interest-free loans to the needy based on trust. No collateral or paperwork is needed. Halima Khatun, a vegetable vendor from Kishoreganj, did not earn much. But whatever she earned, helped her family out a lot. One day, her working capital, five thousand taka, got stolen. Now, she could not buy vegetables anymore and lost her business.

Nobody wanted to lend her money thinking that recovering the loan might not be possible from such a poor lady. The traditional moneylenders, on the other hand, charged high interest, so Halima was afraid of borrowing from them.

Then an organisation named One Taka Fund (OTF) offered to give her a loan without interest. On top of that, she was told that she could take as many days as she wanted to repay the money.

Halima could not believe her ears at first. She only took Tk1,000, because the hard-working woman did not like to be in debt.

Halima herself decided the terms of the loan – she would return the money in 100 days in 10 taka installments per day.

“She did not forget to pay the installments even for a day. What we learnt was that honest and hardworking people never forget the favour you do to them,” said Arifur Rahman, the founder of One Taka Fund. 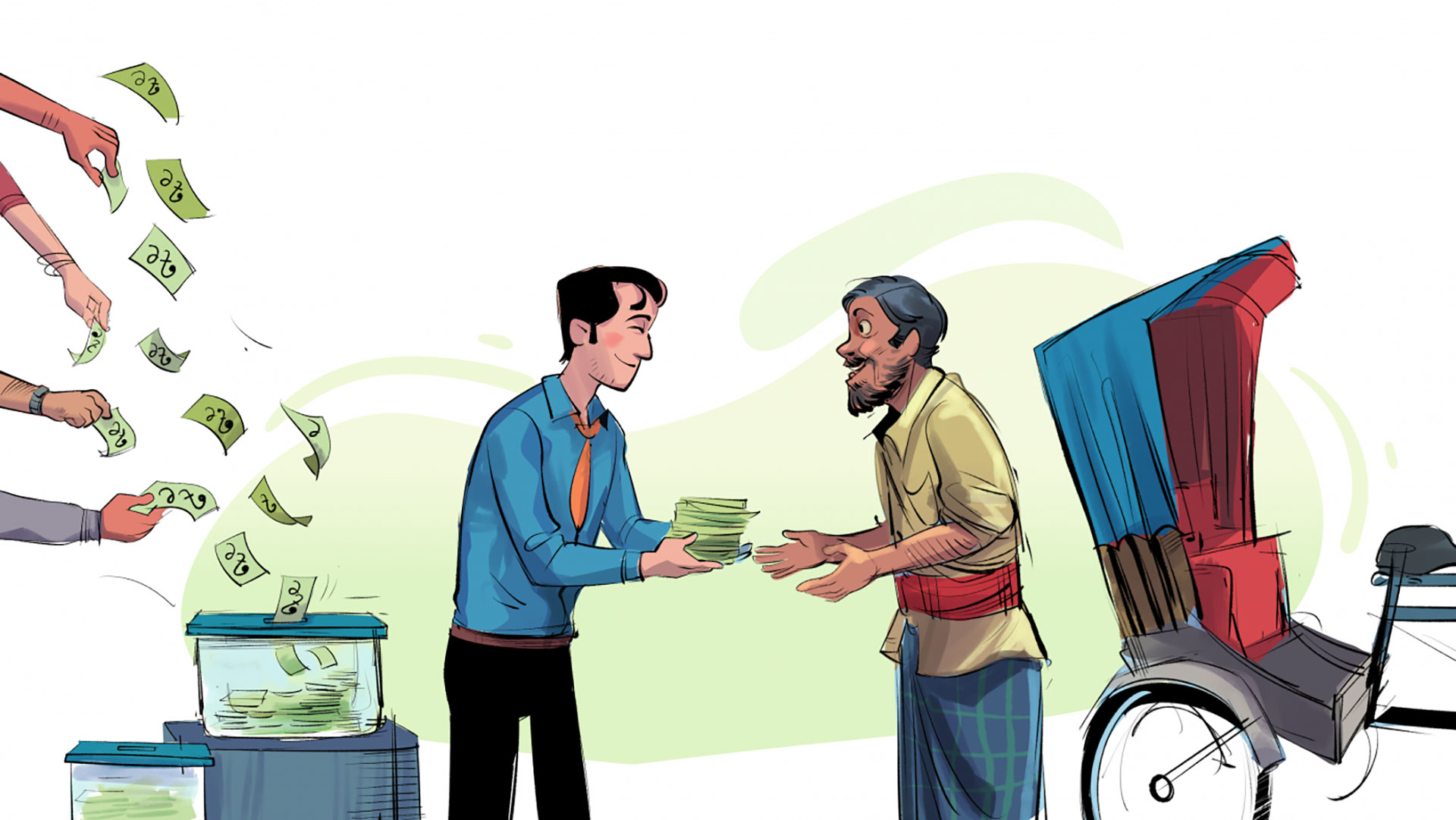 Another rickshaw puller from the same district, Montu Miah, took a bigger loan from OTF. He did not own a rickshaw himself.

He used to take one from a garage for a Tk200 rent per day. The days that Montu Mihah could go out with a rickshaw earned him enough to feed his family.

But the elderly man often could not do that due to various illnesses. Moreover, the garage owner sometimes gave the rickshaw to someone else as Montu was irregular. Pulling a non-motorised rickshaw is also very hard for a man of ill health.

Informed about his plight, OTF offered to buy him a second-hand motorised rickshaw. Like Halima, Montu also could not believe that someone would lend him Tk20,000 without interest. He accepted the condition that he would repay Tk100 every day.

Instead of 200 days, Montu Miah repaid the whole amount in 105 days and became a rickshaw owner. Now, the days on which he cannot ride the rickshaw himself, he rents it out to someone else for Tk200 a day.

Another client, Morjina Begum, a domestic help from Mymensingh, was so grateful for the loan from OTF that she became a donor herself after repaying her Tk20,000 loan.

In simple terms, every donor of the organisation gives Tk1 every day for 6 months, which amounts to Tk180. Hence the name ‘One Taka Fund’.

The Fund’s policy is to provide interest-less loan service to honest and hardworking people so that they can start or scale up a business. So far, the small organisation has provided loans to 107 persons. 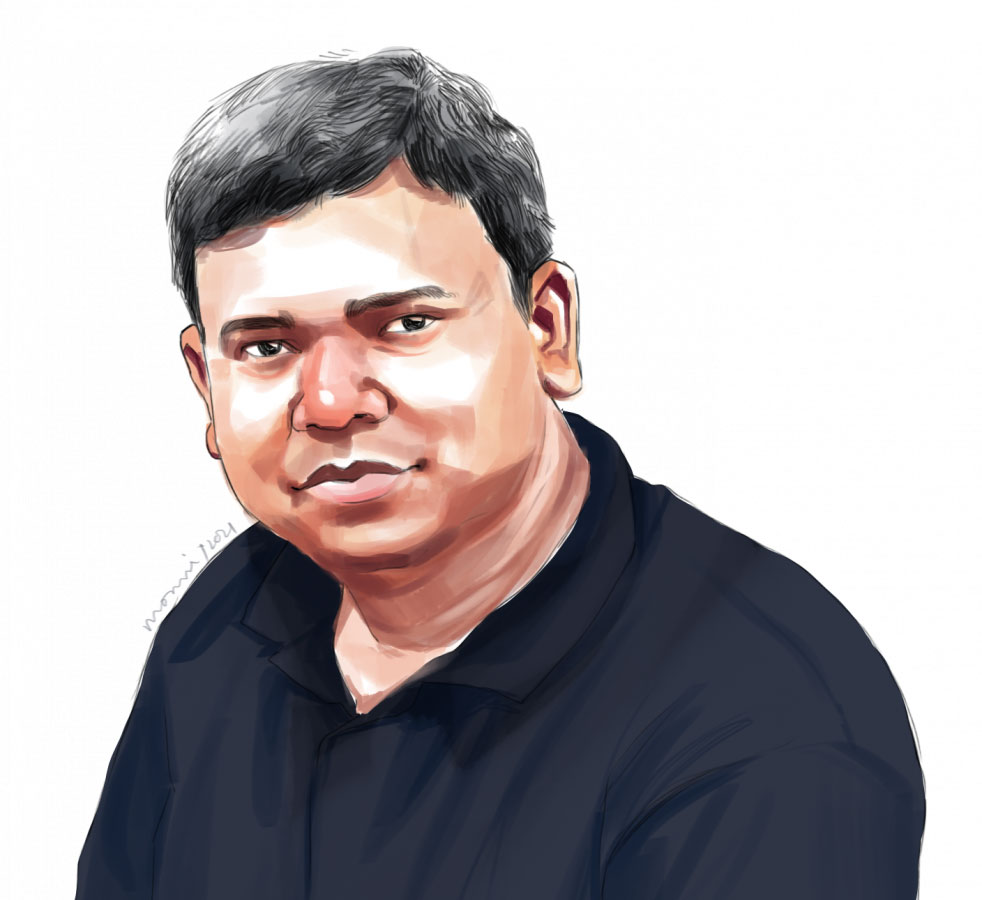 People stuck in debt with high interest rate are also eligible for the loan, provided that they have the means to repay. The client agrees to repay the money in small, daily installments of their convenience.

Once recovered, the money does not go back to the donor. It goes to another client as a loan. Therefore, while OTF is a charity in the eyes of the donors, it is an informal financier to the borrowers. Also, the arrangement is more dignifying for the recipient because s/he is repaying the money.

Moreover, the repaid amount is also helping another in need.

As the volunteers of the organisation cautiously choose the recipients based on their integrity, here the loan recovery rate is impressive.

Scanning the financial statement posted on the organisation’s website (www.onetakafund.org), it appeared that during the first year of operation, a small percentage of clients indeed failed to repay the loan.

But, the organisation took lessons and adapted from those cases accordingly. OTF has completed its fourth year now, with a 100 percent loan recovery rate for the rest of the time.

Also, with every new donation, the activity of the organisation increases because the capital never decreases except when some part of it gets stuck in a ‘project’ for a longer period.

The organisation is working simply on trust. No collateral or paperwork is needed. Arifur Rahman took inspiration from his teacher, Professor Muhammad Zafar Iqbal while studying at Shahjalal University of Science and Technology.

“Zafar sir used to say, do not ever distrust people in advance. If you do, a person may turn out to be very trustworthy later, and then you will feel really bad,” said Arif. Trust is paying off for the organisation, he added.

At the onset of the Covid-19 outbreak, OTF stepped outside their motto of providing support only for self-reliance and started helping out the people who lost work due to the pandemic. They have also been distributing food among the destitute.

According to Arif, OTF has managed to ensure a full meal for each family (of five members) only with Tk50 in Kurigram, which included rice, lentil, pumpkin, dry fish and essential cooking ingredients.

Many donors also give their zakat to OTF to distribute to the ones who need it most. This money is not returned by the recipients, because zakat is by the definition a charity, not a loan. These are the funds that OTF manages in a different way than the loan activity.

So far, 270 families received zakat and Covid-19 assistance. Besides, more than 1,000 persons got at least one day’s meals from OTF’s no return fund.

Also, two students are getting scholarships from OTF. One of them, a topper from a renowned public university, will return the money (tk3,000 per month) once he gets a job.

OTF’s donors have donated three sacrificial animals in the last two years for people – 200 families – in Kurigram who don’t get to eat beef except for Eid ul Azha.

And this week, OTF is going to install two tubewells for farmers in Bogura for drinking water, Arifur Rahman told TBS.

This is how, apart from the regular loan activity, OTF lends a hand whenever possible.

The organisation tries and maintains a good level of transparency, with open-book accounts that include beneficiary and donors’ lists on their website. The site has info on how much fund the organisation received, when they received it, how much was paid back by the recipients and what the beneficiaries do for a living.

OTF does not have any paid employees, nor do they have a plan to employ staff in the near future because it increases the operating cost and eats up the available capital. Rather, volunteers run the whole operation just to help others in need and ensure peace of mind in exchange.

Then how does the organisation plan to expand and sustain itself?

“OTF is based solely on trust. As long as donors trust our initiative, they will keep donating. On the other hand, the money will keep rotating on the same principle and the organisation will be expanding,” the founder of OTF said.