Fifty years ago, Biman Chand Mullick was assigned with designing the first Bangladesh stamp series. He not only delivered, but continued to live an active life of an artist and activist for five decades

1963, Spain. Long before Satyajit Ray made ‘Agantuk,’ a young man named Biman Chand Mullick from Bengal was roaming inside the Altamira cave, studying the famous prehistoric bison and recreating the painting.

When he returned to London, where he was studying art at the Saint Martin’s School of Art, he made drawings, paintings and prints using different tools including calligraphic pen, and on different surfaces including embossed wallpaper.

That year (1963) Biman stood first among 27 British and foreign students in his art school.

Born in Howrah, India in 1933, Biman travelled to Europe in the 1960s to pursue his love and passion for art. But how is this octogenarian relevant to us?

“One thing I learned there is that art is storytelling and that is what I implied in my Bangladesh stamp series,” Biman recently told me over a Zoom call from his England home. 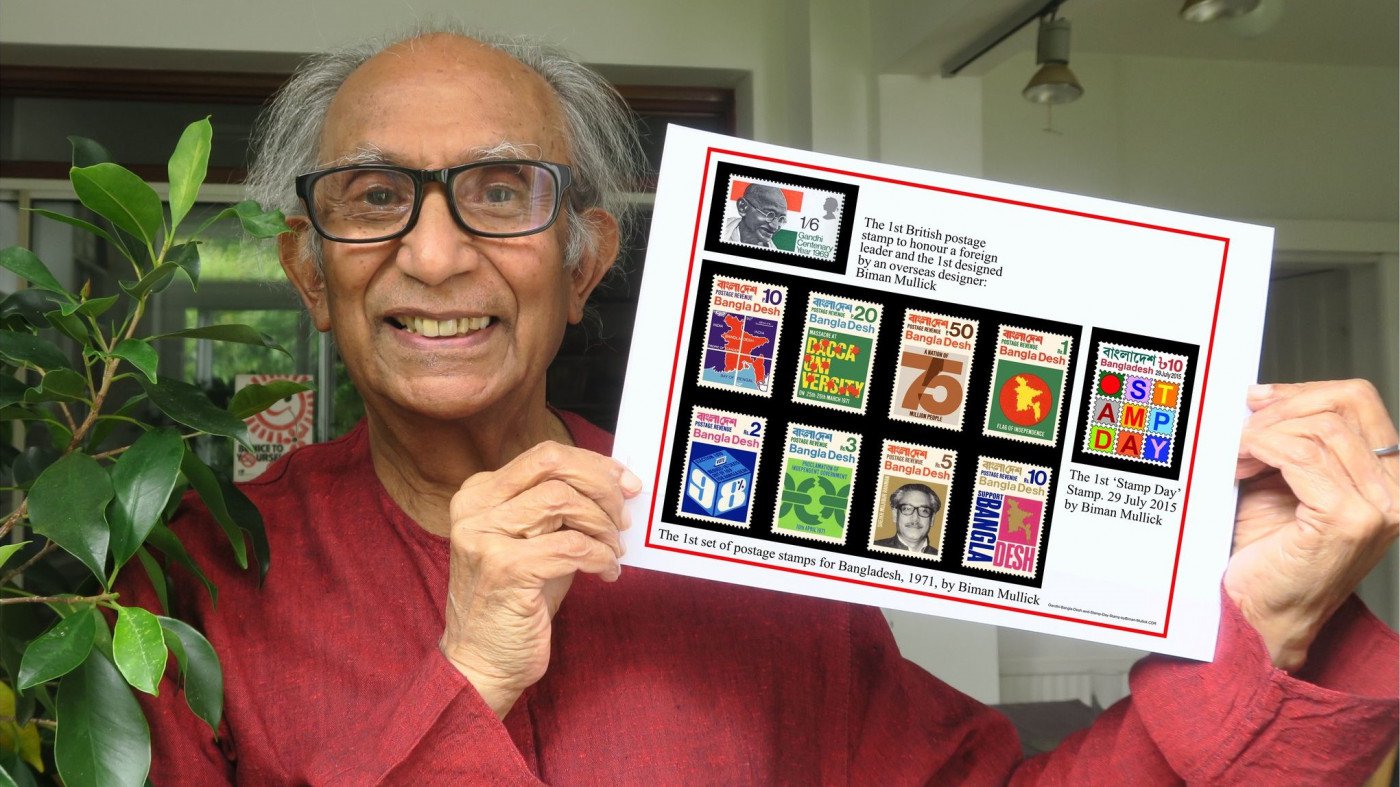 Biman Mullick holds up one of his most cherished accomplishments: The Bangladesh stamp series। Photo: Courtesy

Biman was the very first person to introduce Bangladesh to the world with the stamps he designed in 1971. In the first set of stamps of an independent Bangladesh, he curved out the entire story of the war-torn country. The set consisted of eight stamps in total.

Perhaps a curious thing for an Indian man living in England to become rigorously invested in the liberation of Bangladesh. But speaking to Biman, fifty years after the fact, I found an expressive, even whimsical man, at first.

I also found out why and how this man contributed to our liberation, and he was formally recognised on 27 March, 2012 when he was honoured with the “Friends of the War of Liberation” award by the government of the People’s Republic of Bangladesh.

As more time passed on our Zoom call clock, I came to know a vibrant, humble gentleman, who is a voracious reader and awe-inspiringly insightful (and also extremely punctual); and who continues to spend his life as a graphic artist, painter, stamp and poster designer, social activist, marathon runner, storyteller and a passionate environmentalist.

“I am basically a storyteller and that’s what I do with all my creations. And somehow as I look at my artwork now, I find that I have protested in every one of them. Be it the Gandhi stamp, or the Bangladesh stamp series or the anti-smoking movement posters,” Biman explained.

Fast-rewind back to 1971. “Back in London I was working as a visiting teacher in graphic design at the Folkstone School of Arts and Crafts. And every day as I was listening to the news on the radio, I felt helpless.

“One day I heard that the Pakistani army killed students of the University of Dhaka and I couldn’t sleep that night. All I could think was I am a teacher myself. I cannot imagine something like this happening to my students,” Biman recalled.

As a result of a series of events, Biman was called upon in 1971 to design the first set of stamps for Bangladesh and was given no instruction as to how to proceed. At that opportune moment, he did not hesitate, rather quickly got to work.

“The world map did not have ‘Bangladesh’ on it up until then. So my idea was to introduce the nation and its birth history to the world. And I figured that I needed eight stamps to tell the story. It took me six weeks to finalise the designs,” he said. For the design itself, Biman took only nine days.

The 10 paisa stamp showed a map of the new state. It is crisscrossed with lines showing the Tropic of Cancer (23.5 degrees’ north latitude) and 90 degrees’ east longitude.

The 20 paisa stamp commemorated the massacre at Dhaka University on 25 and 26 March, 1971 by the Pakistan Army that killed over 300 students and teachers.

The 50 paisa stamp says that Bangladesh is a nation of 75 million people.

The one-rupee stamp displays the first flag of the new state.

The three-rupee stamp, with its breaking of the green chains of bondage and slavery, celebrated the declaration of the independent government on 10 April, 1971.

The five-rupee stamp had a portrait of Sheikh Mujibur Rahman. At the time, he was considered to be the leader behind the independence of Bangladesh.

The colourful ten-rupee stamp encouraged all people to support the newly independent Bangladesh.

Biman (mostly) sketched the designs sitting on the train and travelling to and from the art school and his home, he recalled. The idea was to spread the stamps all over the world, as letters were a universal medium of communication back then, and also to collect funds for the country, Biman reiterated.

And the price was also something that needed to be considered. Biman thought of keeping the price under one pound so that it would be affordable, serious philatelists could collect them; and the more people would buy, the more money could be raised for Bangladesh.

The backstory of Biman and Bangladesh

In April, at a refugee camp in India, Prime Minister Tajuddin Ahmed discussed the issue in detail with John Stonehouse – then MP of the British Labour Party and former Post and Telecommunications minister.  In May 1971, Stonehouse was given the responsibility for issuing the stamps with the permission of the Mujibnagar government. 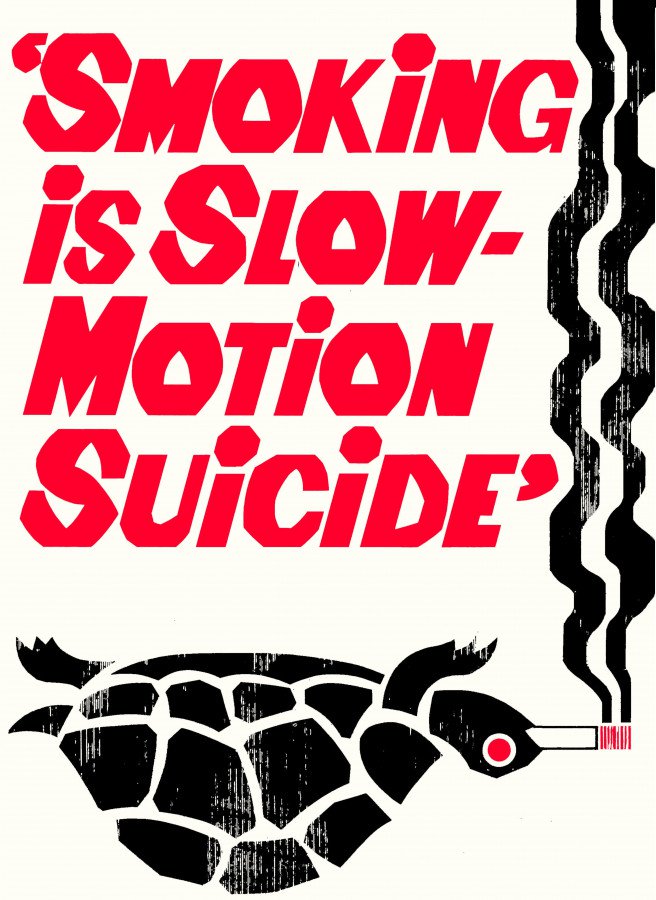 One of his posters from his anti-smoking movement. Photo: Courtesy

After returning to the UK, Stonehouse met with Justice Abu Sayeed Chowdhury of the Bangladesh Mission in the UK.  He introduced Chowdhury to Biman.

The artists agreed to the assignment without remuneration and even today, he considers the Bangladesh stamp series as one of the best accomplishments of his artistic life.

On 26 July, Stonehouse, Biman Mullick and Justice Abu Sayeed Chowdhury of the Bangladesh Mission in the UK presented the first set of eight postage stamps for the new Republic of Bangladesh in the Harcourt room of the House of Commons in London.

All the guests were given a press pack which not only included the eight stamps but also included a First Day Cover and relevant information regarding this historic stamp. The next day, the news of the issuance of Bangladeshi stamps was spread and on 29 July, they were issued from different parts of the world.

On 1 August at a large rally in Trafalgar Square in England, Biman and Stonehouse showed colourful enlargements of these eight stamps in the presence of various dignitaries and expatriate Bengalis while calling for full support for Bangladesh’s independence.

The reason why Biman was called upon for this assignment dates back to 1969, when he  designed a commemorative stamp for the British Postal Department. It was on the occasion of the birth centenary of Mahatma Gandhi and he had won a gold medal for his work.

It was the first British stamp to commemorate an overseas leader and the first to be designed by an overseas artist. And this feat garnered him the reputation of an important man in the art world.

The backstory of Biman: Biman was raised by a philanthropist father Ajit Kumar Mullick who was an anti-British coloniser freedom fighter. And, he recalled, several famous names frequented his house.

“I had seen Netaji Subhash Chandra Bose, Deshbondhu Chittaranjan Das, Sarat Chandra Chatterjee, and many more extravagant personalities coming to our home. Some of them came before my birth and some of them came after and it’s that nutritious environment that nourished my soul”.

During the second world war, when Biman was younger than 10 years old, there were rumours of the Japanese soldiers planning to attack Kolkata and bomb Howrah bridge.

So Biman’s family shifted to Bihar, where his father had a kaolin mine.

The tranquility, the sound of crickets when the mining area quieted down and his mother, Shroddha Devi, reading Ramayana and Mahabharata, is what he vividly remembers.

“And I could see Hanuman and other characters performing in front of me,” Biman recalled. It is in that serene nature where Biman had his homeschooling. “It’s the upbringing and the surrounding environment that made me an artist,” he recalled. 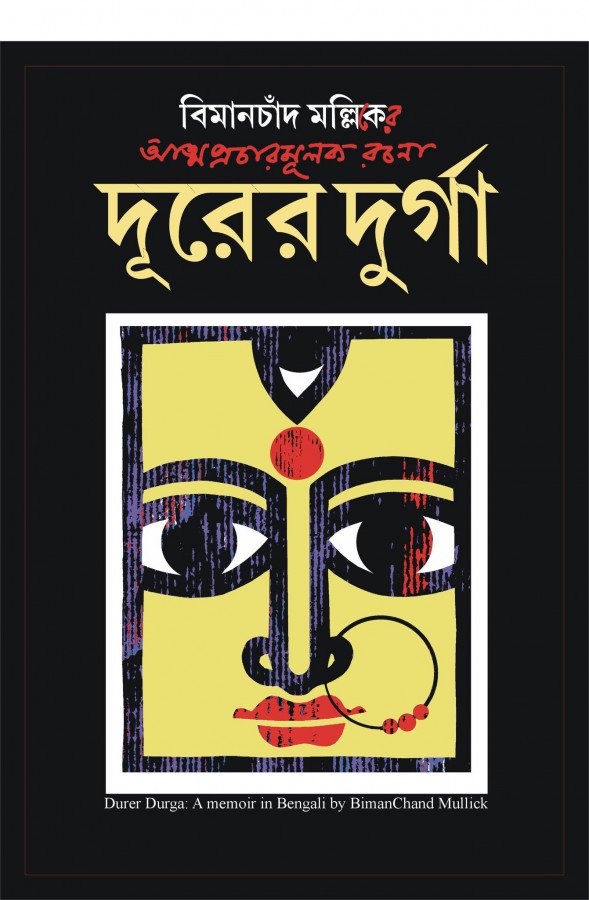 A book cover, one of the several of his published works. Photo: Courtesy

Even earlier, when Biman was 3 or 4 years old, one day his mother, Shroddha Devi, drew a Bangla 5 and added a circular line around it with two eyes and a long tail. And “to my utter surprise, it was a hanuman!’ he recalled. An epiphany and a moment of inspiration became imprinted on the young man’s mind.

“It was Hanuman that inspired me to be an artist,” said Biman.

Later in life, he studied literature in Kolkata (former Calcutta) and advertising design and art in London. He has worked as a teacher, graphics designer and won several accolades. As an artist and writer, he has executed projects for the British Broadcasting Corporation (BBC), Oxford University Press, Cambridge University Press and other organisations.

He has never settled for any full-time employment as he prefers to work independently. So it was mainly freelance and contract-based jobs that he went for.

‘An artist has little control over his mind’

Biman, as an artist, says sometimes he has little control over his mind. That is why in 1972 when he saw a child being exposed to passive smoking, Biman started his anti-smoking movement.

He started his protest as a teacher when he saw his British students smoking inside the class. “For this I have lost a number of jobs as a lecturer. But that didn’t stop me,” said Biman. 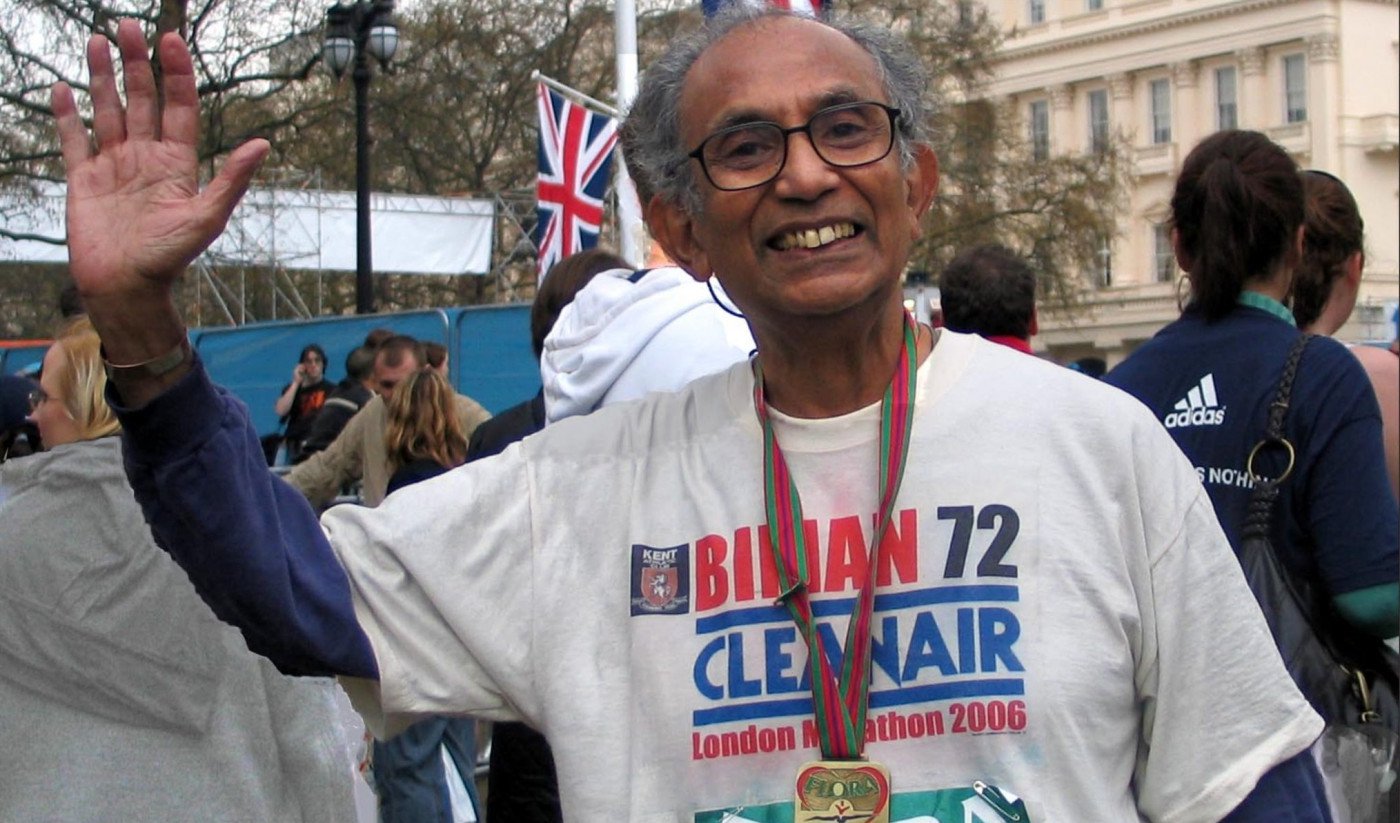 He set up Cleanair in 1972, a voluntary non-profit organisation that worked to spread awareness of the health and environmental risks of smoking.

In 1988, WHO celebrated its 40th anniversary by awarding 40 medals. Biman was among them. Biman had been a marathon runner as well.

In his late 80s, Biman is still a health enthusiast. He wants to run even today but he said ‘My daughter Sandra doesn’t allow me to. So, my son-in-law, James will be here any moment,” Biman explained.

Biman was getting late for his walk with James as we sat speaking over a Zoom call.

Blyth Hills Fields was awaiting for this octogenarian to walk over its grass. And I felt as though I had just time travelled with Biman Chand Mullick, an artist, an encyclopedia of knowledge and a great friend of Bangladesh.