Meet EcoVation: They make lamps from plastic water bottles and much more

A young man’s interest in technology and social work led to a research and innovation-driven social enterprise that is lighting up rural communities. Shanjidul Alam has been enthusiastic about tech stuff for as long as he can remember.

Throughout his childhood, he used to make simple, homemade DIY (do-it-yourself) electronic components out of extracted materials from electronic devices like radio, television, toys, etc.

Shanjidul developed another passion in his teenage years, volunteering for the welfare of underprivileged people. In 2014, he saw a YouTube video of making a ‘water light bottle.’ He experimented with the method in his hometown and it was successful. The success prompted an idea. What if he used his volunteering network to make this product on a large scale and help marginalised people? 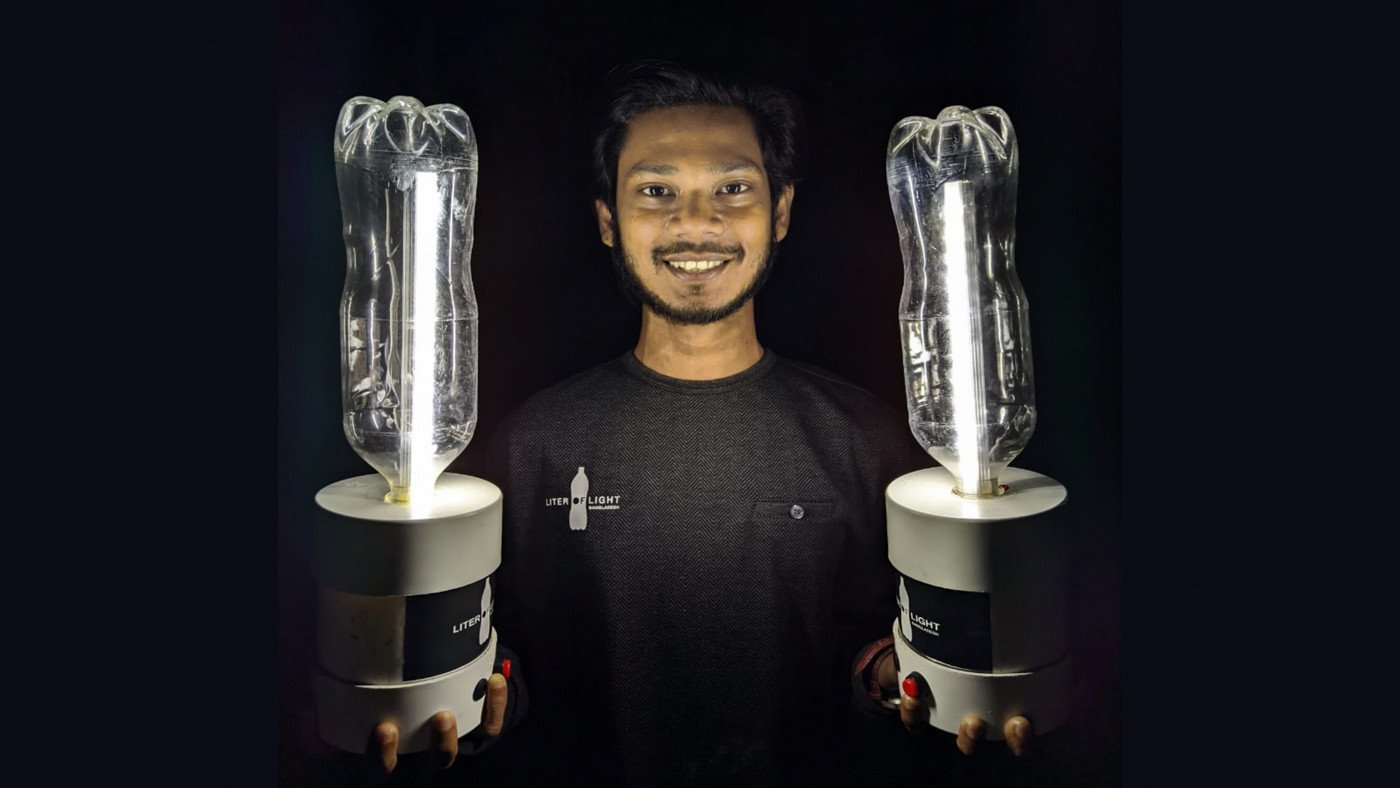 Shanjidul Alam started work in the technology field from the young age of 18. Photo: Courtesy

Adding fuel to his fire, he came to know about the Litre of Light – a grassroots and global movement which provides low-cost, eco-friendly solar lights to people who have limited or no access to electricity.

In partnership with them, Shanjidul built the Litre of Light Bangladesh (later renamed EcoVation) to make the technology more available to the thousands of people in rural areas.

“Back in 2014, electricity was a little scarce, especially in the rural areas. So I thought of doing something for the unprivileged who did not have access to electricity. 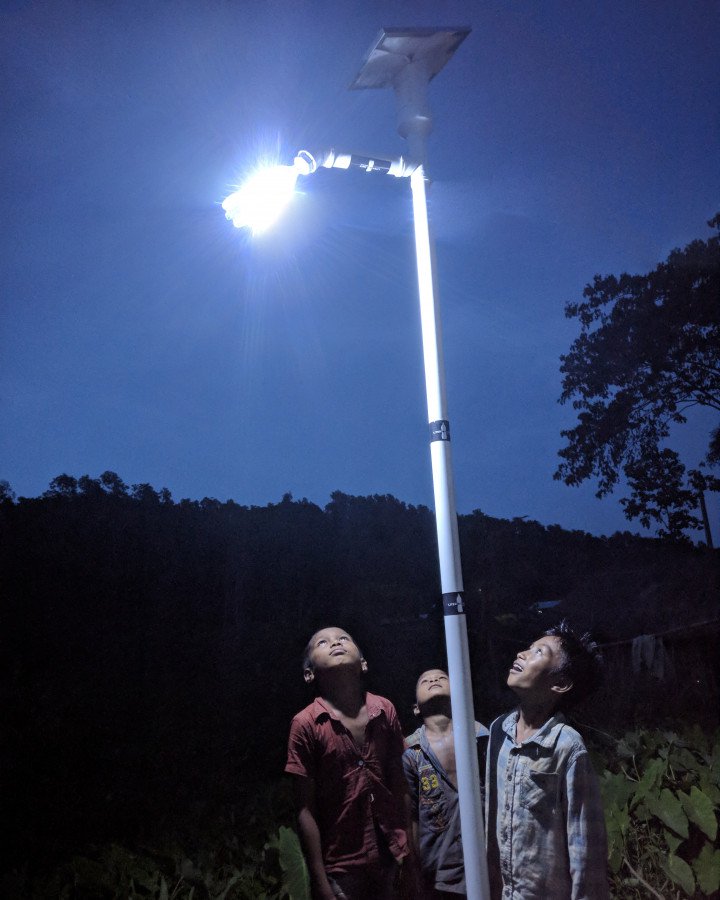 He also added, “We could have made it from other materials, but the plastic bottle seemed right, eco-friendly and reusable. We take materials from second-hand products or broken home appliances and refurbish or make them reusable. We also provide some of the essential materials.” Shanjidul then shared an interesting story about their very first product: the water bottle lamp. This light does not have any electronic components. Rather, it was just made out of a plastic bottle filled with chlorinated water. And it is set on the tin-roof by cutting a small hole there.

When the clean water consumes sunlight, it then refracts bright sunlight that illuminates a dark room during the daytime. It costs less than Tk100 to make.

This light is designed to help brighten up dark rooms in congested areas or slums where even in the day, it is very dark.

For a couple of years, Shanjidul and his team focused only on providing power.

In 2020, Litre of Light Bangladesh rebranded itself as EcoVation. As the organisation broadened its scope with many more initiatives, its name needed to reflect that.

“Indeed, we have started many more projects. And in Bangladesh, the electricity problem is largely under control. Under our umbrella organisation named ‘EcoVation,’ we have many initiatives. For example, Project LightGiver, Project Bishuddho Pani, Project MyPad, Project AntiPlastic, etc,” he added. 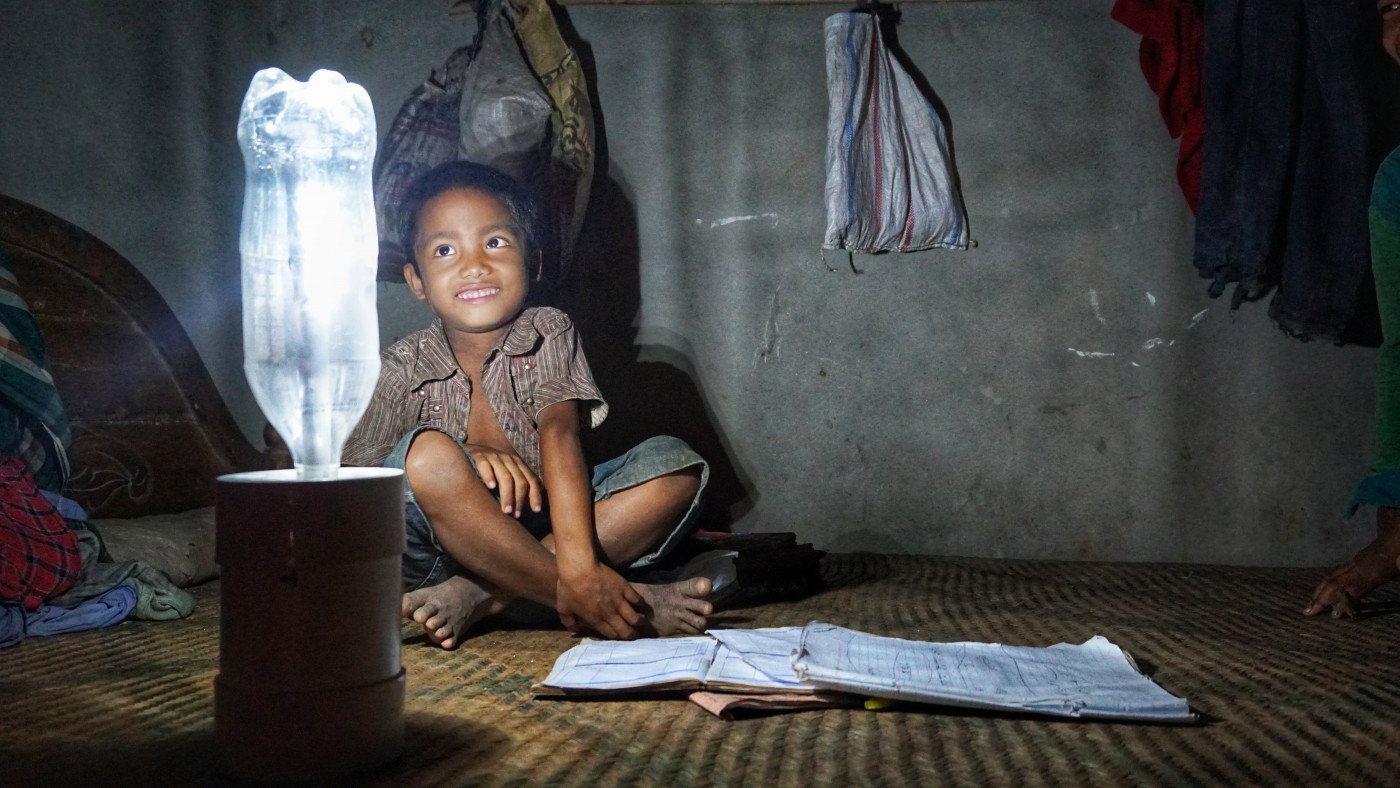 A Tour for Light and water solutions

The EcoVation team surveys rural areas where there is no electricity. Then volunteers who had no skill in electronics get a short training from the EcoVation engineering team, and later at the EcoVation MakersLab they make the lights.

The volunteers make them and distribute them free of cost to electricity-deprived areas such as coastal areas, islands, hill tract areas, slum and refugee camps. They train underprivileged youth on making them so that they can turn into solar engineers. 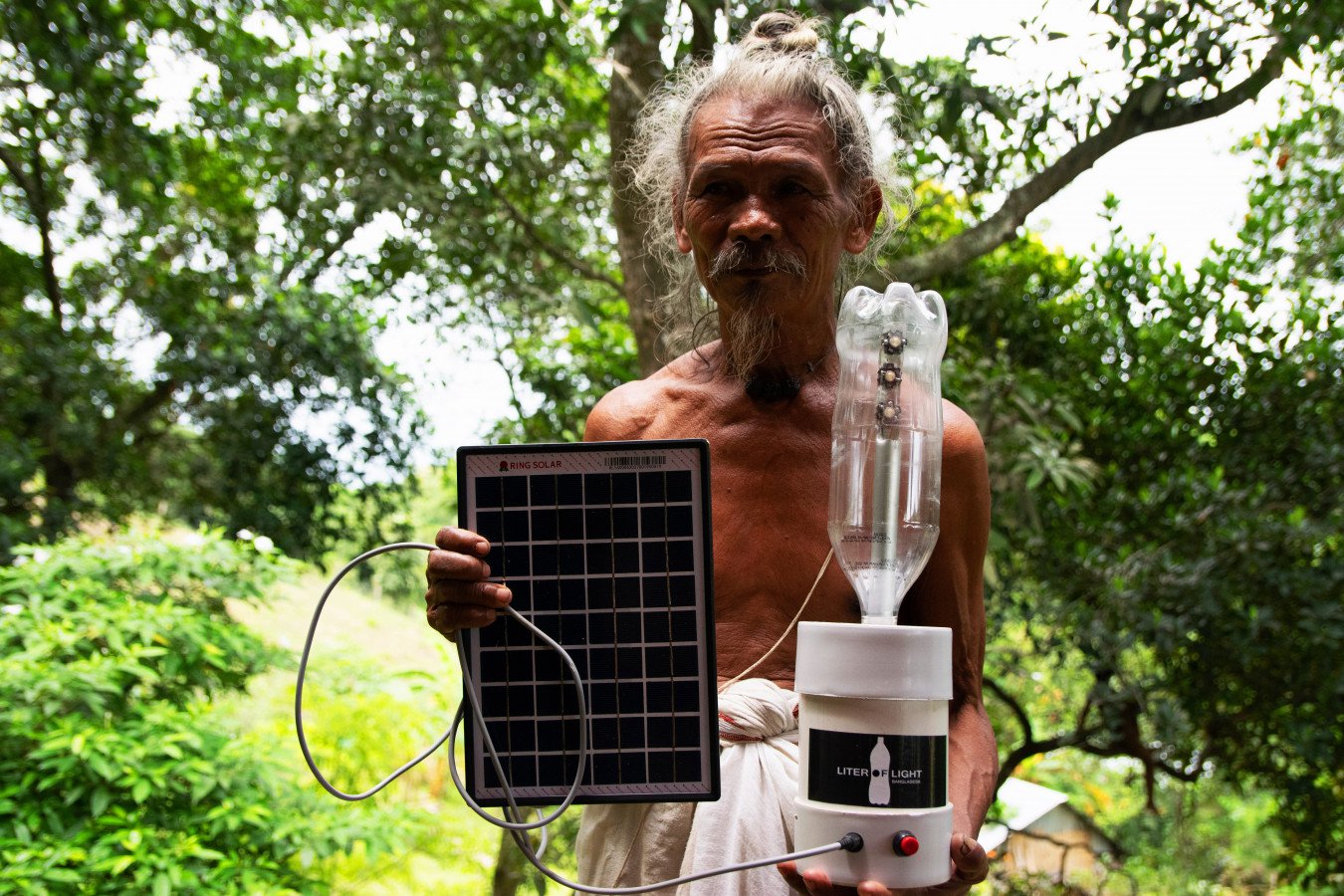 “EcoVation is a passionate research and innovation-driven social enterprise with a vision to solve society’s problems by innovations. We started the journey with an aim to solve the energy problem in Bangladesh,” said Shanjidul. “Over the years, other than lighting up underprivileged lives free-of-cost, we have ventured into ensuring clean water for communities, building a plastic-free Bangladesh, etc.”

Many communities in rural and remote areas lack access to safe drinking water. Even low-income families and slum-dwellers in urban areas have to drink contaminated water.

To address the problem, EcoVations has developed a water purifying system at a very low cost. They have designed handheld portable water purification filters that can be used in rural areas to filter drinking water instantly.

“At the beginning of 2020, we started an initiative called ‘Project Bishuddha Pani.’ We designed RO (reverse osmosis) based purifying systems, which are powered by solar panels.

To date, we have installed 20 purifiers in different public places such as mosques, madrasas, schools, etc. Around 50,000 people can avail these services installed in areas such as Chittagong and Teknaf, near the Rohingya refugee camp,” said Shanjidul. Under their project AntiPlastic, they design and promote eco-friendly plastic alternatives. For example, they are teaching people how to make clay and bamboo utensils and containers such as bottles, plates, spoons etc. 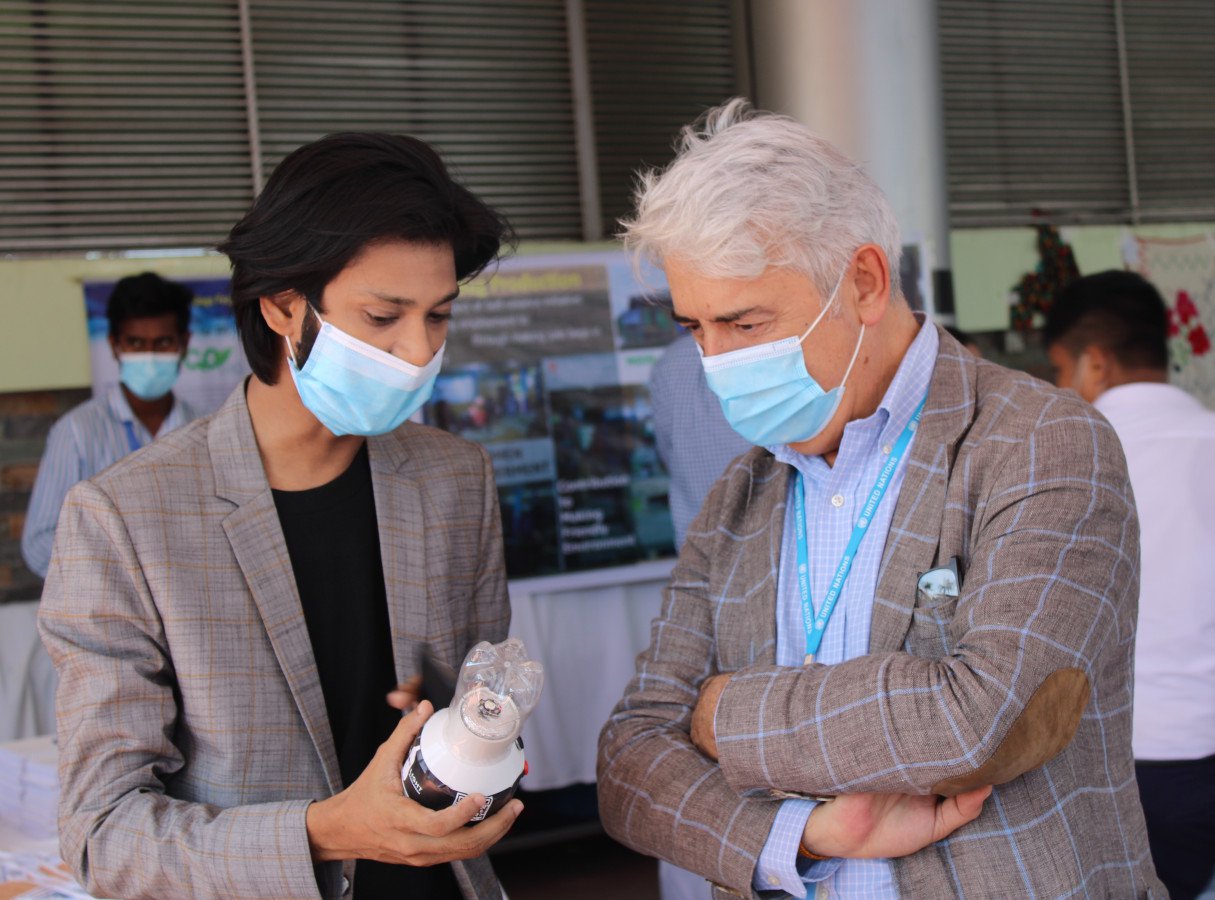 In early 2020, in partnership with Dutch INGO ICCO Cooperation, EcoVation trained 250 Rohingya youths and provided solar lamps and streetlights in the camp area.

In the last six years, more than 2,000 youths have engaged with EcoVation.

The core EcoVations team consists of 30 members who actively execute its various projects. And currently, they have 200 regular volunteers. The organisation’s are largely funded through NGO donors, while sometimes their volunteers also contribute financially. 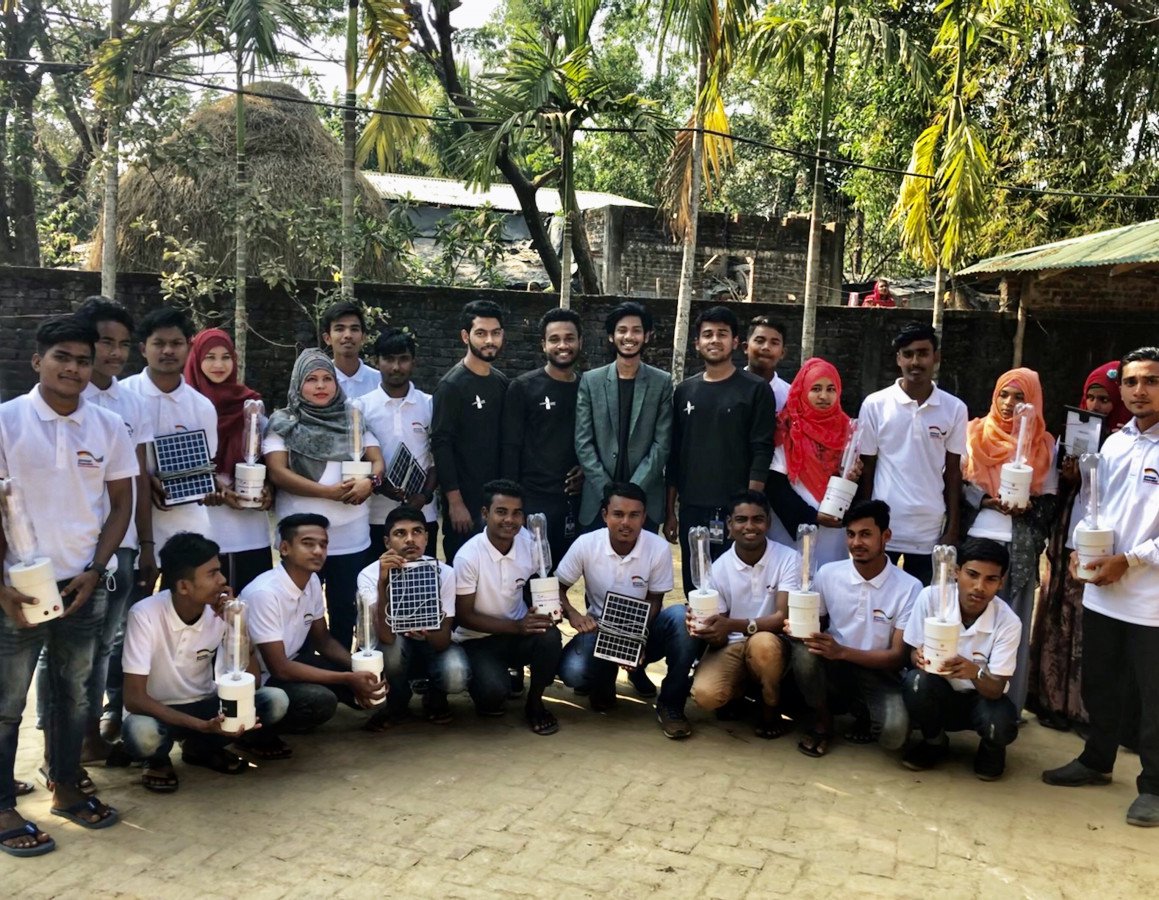 For their impressive work in the social enterprise sector, EcoVation has earned many accolades. Last year, the organisation won a “Startup Award” from Youth Co:Lab, organised by the UNDP and CitiGroup. On top of that, founder Shanjidul has been named in the George HW Bush Points of Light Inspiration Honor Roll this year. EcoVation was also shortlisted for the Young Leaders for SDGs Award by the United Nations. Last but not the least, this year Shanjidul is shortlisted in the Joy Bangla Youth Award.

“I want to train thousands of underprivileged youth of the country so that they can add up to the green energy skill economy. We want to provide free eco-friendly renewable energy solutions. We want to keep innovating easy-to-make solutions,” shared Shanjidul with regards to expanding EcoVation across the country.