Life of a rare entrepreneur on web

Transcom Group’s late chairman Latifur Rahman is a symbol of ethical business in the business arena of Bangladesh. Everyone recalls Latifur Rahman a man of principles and an entrepreneur of ethics. The website (www.latifurrahman.com) is an archive about the life, achievements and recognitions of this entrepreneur extraordinaire, replete in articles, photos and videos. The bi-lingual–Bangla and English — website was launched on 28 August, the birthday of Latifur Rahman.

Latifur Rahman passed away at his village home Cheora in Cumilla on 1 July 2020, exactly four years after the Holy Artisan tragedy. What a miracle, on this very day in 2016, his dear grandson Faraaz Ayaaz Hossain had been killed in a brutal militant attack on the Holy Artisan Bakery in Gulshan.

1 July 2021 was the first death anniversary of Latifur Rahman and the fifth death anniversary of Faraaz. At the behest of managing editor Sajjad Sharif in mid-June, I held a meeting with feature editor Shumana Sharmin and QM Ashfaq Ali. Sajjad Bhai said special respect would be offered on behalf of Prothom Alo to Latifur Rahman on his first death anniversary. A web page about him would be launched at prothomalo.com. His life, pictures, videos and articles about him and his values and his various initiatives and successes would appear on the site.

Latifur Rahman and the life of his grandson Faraaz Ayaaz Hossain have been part and parcel in different ways. Faraaz has become a symbol of courage by sacrificing his life for his friends. There will also be a special section on this page for Faraaz.

Ashfaq Ali will look after the technical side of the web page while we will manage articles, pictures, videos and brief bio of Latifur Rahman. 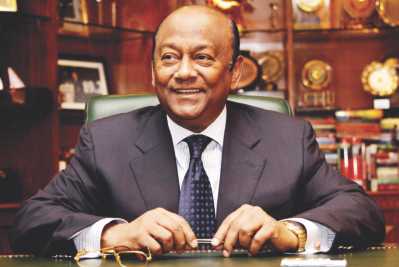 1 July is a day of mourning for Latifur Rahman’s family. His family does not participate in any event on the day. But Latifur Rahman’s elder daughter and Transcom Group CEO Simeen Rahman and his son Zaraif Ayaat Hossain virtually joined the launching of web page. At the event Prothom Alo editor Matiur Rahman said from the first day of Prothom Alo, Latifur Rahman remained engaged in all matters of the newspaper, lent his leadership and gave advice. He is with us too today.

While making web page, there was a plan to publish a full webpage about Latifur Rahman. Matiur Rahman declared that website would be launched on 28 August, the birthday of Latifur Rahman.

The site domain have been bought earlier. Now it was time to collect the contents and make the arrangements. Under the leadership of Sajjad Sharif, the task kicked off. We used Latifur Rahman’s pictures taken by Prothom Alo photographers. There are several videos of his speeches delivered on the founding anniversaries of Prothom Alo.

On the webpage, there is Latifur Rahman’s article titled ‘ Starting from scratch’. There are stories of his struggles as an entrepreneur. As the government nationalised the family jute mill due after independence, he had to start all over again, from scratch. Transcom Group, built on strong ethics, has turned one of the top business conglomerates, fast expanding and multifarious.

The articles of various persons on the site gives an idea about the professional and personal life of Latifur Rahman who was awarded ‘Oslo Business for Peace Award’, known as Nobel in the business arena of the world. As a man and entrepreneur, he was modest, a dreamer, a man of principles and a pioneer of free media, all of which is reflected in the articles of Rehman Sobhan, Anis Ud Dowla, Tariq Karim, Matiur Rahman, Mahfuz Anam, Asaduzzaman Noor, Simeen Rahman, Syed Nasim Manzur, Anisul Hoque and others.

Zia said he has known Latifur Rahman and his family anew while going through their innumerable pictures during the collection. While launching the website, Simeen Rahman said, “My father would talk about documentation all the time. He would collect pictures whenever he made a visit anywhere or joined a n event. He himself would take photos with hiscamera. He would say one day these pictures would be valuable reminiscences.”

We got pictures of Latifur Rahman — from childhood and throughout his life. In the pictures, we find a reflection of a loving husband, affectionate father and a lively grandfather.

Zaraif Ayaat Hossain also assisted in creating the website. He wrote the timeline of Latifur Rahman and Transcom Group and sent it to us. He has an article on his younger brother Faraaz.

As it is a bilingual site, so head of Prothom Alo’s English web Ayesha Kabir has played a significant role. She id all required in translation and editing. Jaoadul Alam translated the timeline in Bangla while Samiha Akbar assisted in arranging the contents.

There is a separate section in the website on Faraaz Ayaaz Hossain, a symbol of courage. There is a documentary on him Chotoo and articles of his friends from home and abroad and his different pictures.

The goal of this website is not just to present Latifur Rahman, but much more than that. The target is to present a rare example of ethical business to the new generation and to inspire them.