Let there be light

EcoVation, a social enterprise specializing in bringing non electrical light to the underprivileged in Bangladesh

Volunteering on beach cleanup in 2010, Shanjidul Alam saw how little access people still had to electricity in rural areas of Bangladesh.

In 2005, at the age of 13, he had made a charge-lamp out of simple materials for the first time out of his curiosity. Since he already had interest in the subject, he began to research.

He found a video on YouTube on how to make lights out of bottles filled with water and by 2014, he began to experiment with this and realized that this innovation could benefit a lot of people in Bangladesh.

Water bottle lamps are just made out of a plastic bottle filled with chlorinated water and set on the tin roof by cutting a small hole.

This light keeps a dark room lit during the daytime, providing bright light. The main mechanism is the clean water refracting the sunlight it consumes from the top. It costs less than Tk300 to make. 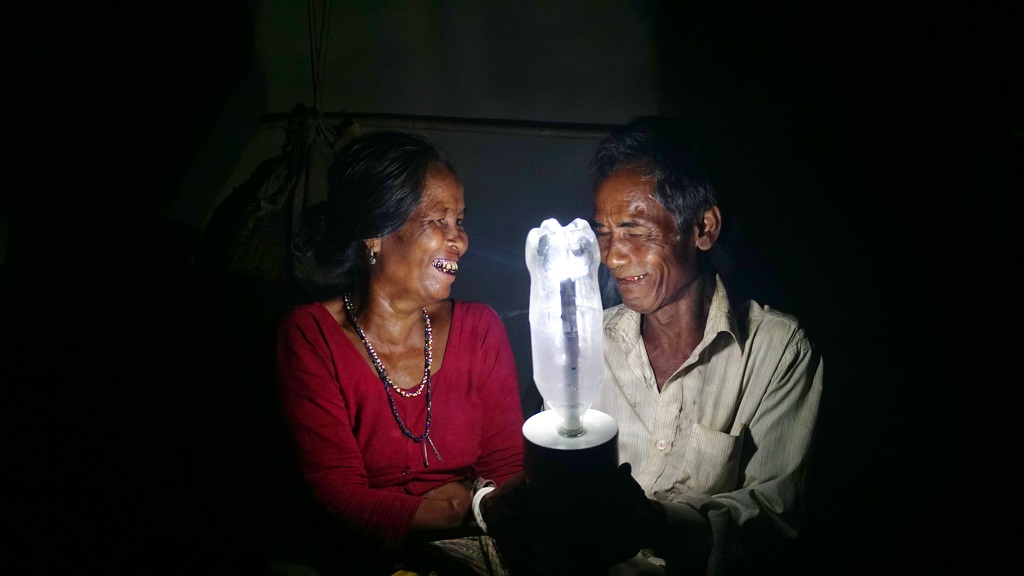 Another Chittagong-based organisation, SETH Group sponsored their projects in the early days. Now they raise funds depending on their project requirements and are also in talks with some renowned conglomerates to fund on a yearly basis. 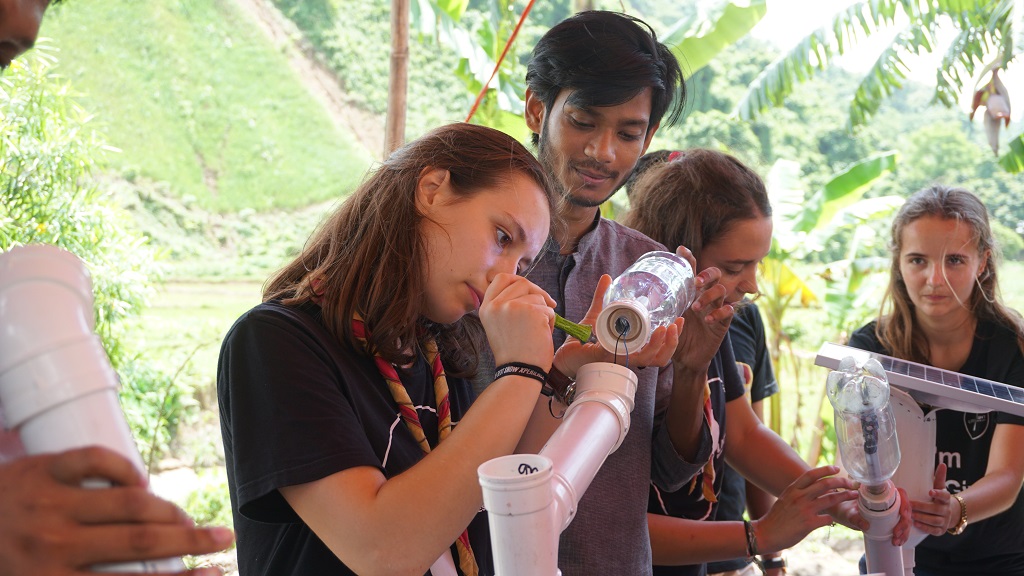 To this day, the organisation implemented over 30 projects around the country, which positively impacted the lives of approximately 1,50,000 disadvantaged people.

The organisation also takes action towards educating the communities on locally innovated technology and solutions.

They aim to innovate technologies that are easy to make and can solve society’s problems.

The organisation’s volunteer-run projects enable the young volunteers to design and make solutions that can solve peoples’ problems.

EcoVation Bangladesh is working to achieve some of the United Nations’ Sustainable Development Goals (SDG).

It all started with lights

While coming up with new ideas and innovations, the organisation kept four things in mind– the innovation had to be eco-friendly, it had to be done using easily available materials, the process should be easy to do and it had to be cost-effective.

“Since the beginning, we have designed 11 kinds of solar lights that are cheap, eco-friendly that anyone can make. We currently have three kinds of solar bottle lights designed by EcoVation Bangladesh, bamboo bottle lamp, solar street light, and water bottle light,” said Shanjidul.

Since all the materials are easily available, the trickiest part of the whole process is making the small circuit that allows the light to function.

It can light up a small room for around 12 hours if charged once with the solar panel.

The organisation makes YouTube tutorials to teach people how to assemble these lights.

The solar streetlights are made out of similar types of materials.

It is just equipped with a different circuit that keeps it on when there is darkness and automatically turns off when there is sunlight.

It is almost one-fifth of the cost of traditional street lights. Both lights have a five-year lifetime, making them well-suited for remote places with extreme climates.

Once EcoVation had success providing lighting solutions to the underprivileged, they ventured into finding solutions for other vital problems.

Each system is equipped with a solar panel, battery, DC submersible pump and an RO water filter.

They have already installed more than 20 of the RO systems under “Project Bishuddha Pani” in different public places such as mosques, madrasa, schools etc, ensuring clean water for around 50,000 people.

It covered areas in Teknaf near the Rohingya refugee camp and Chittagong so far. 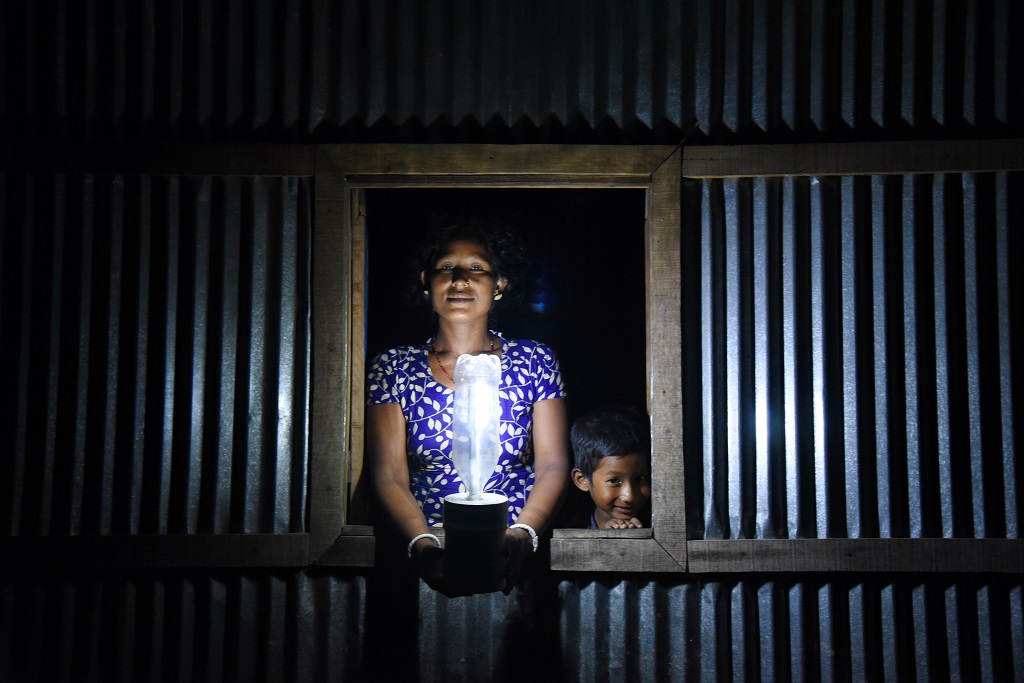 The organisation is also designing portable handheld water filters, which can be used in remote places to drink instant clean water.

To address water problems in the hill tracts area, they are experimenting with ramp-pump technology which is a hydraulic pump that does not need any electricity.

The ram pump can lift water to a max height of 180 feet. This produces a lot of pressure at the pump with an input head pressure of 25 feet.

Nearly 95% of the menstruating women in Bangladesh can not afford sanitary pads and even if they did, these single-use sanitary pads become an environmental hazard due to their slow degradation.

It brings employment and access to a basic need. The organisation believes that low-cost sanitary napkins can drastically change the lives of women working in factories.

The taboo around menstrual health is still as prevalent in the society of Bangladesh as it was for many years, despite the issue concerning half of the population.

Another part of Project MyPad is to raise awareness regarding the subject and emphasize practising menstrual hygiene management. 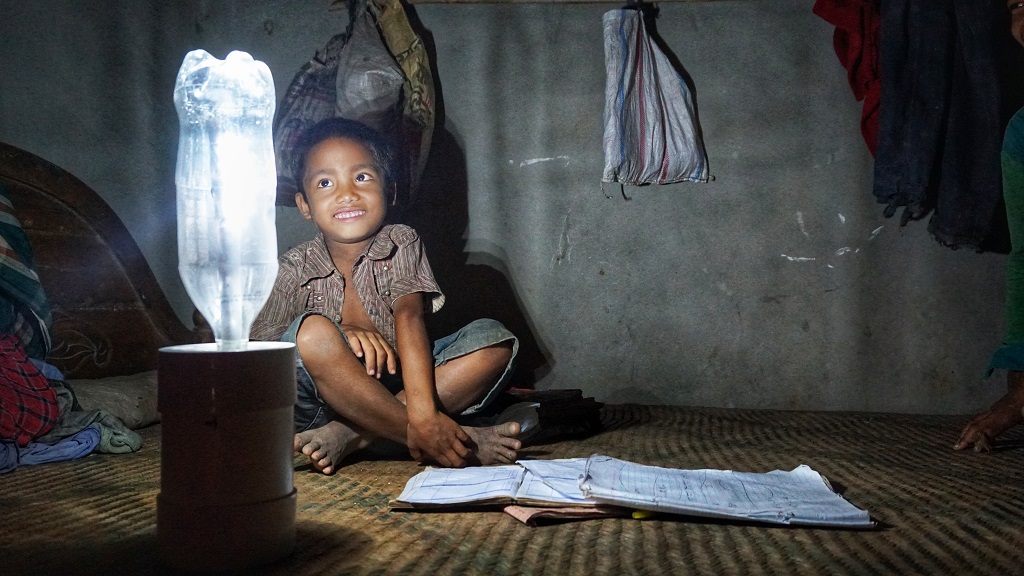 To remove the social taboos and create awareness, Project MyPad also trained and briefed at least a few thousand school-going girls in the last ten years about the management of menstrual issues.

They are also planning to launch and operate a toll-free teleservice where any woman can get free advice from professionals.

Pads will be stacked in the vending machine and buyers can scan QR codes by MFS apps and then place orders.

EcoVation is trying to create their own brand next year, through which the organisation can generate money by selling sanitary pads.

“We are equipping it with a solar panel and battery so it works even if electricity is unavailable,” the founder added.

The organisation is also designing a low-cost power wall, equipped with a nickel-metal hydride (NiMH) battery pack and a solar panel that can provide seamless electricity in rural areas at an affordable price.

Under the “Project Rohingya”, EcoVation Bangladesh partnered up with Dutch INGO ICCO Cooperation in early 2020.

They started a pilot project with the Rohingya population by training 250 host community youths initially.

The 250 trainees are now running their own micro-enterprise on making solar lamps and selling them to the refugee camp with seed capital support from ICCO.

EcoVation is now partnering up with UN Organizations like WFP, IOM, UN Women and UNHCR to run large scale programs to provide solar lamps and streetlights in the camp area and host community.

“We have plans to distribute 10,000 water bottle lamps, solar lamps and streetlights in the Rohingya refugee camp and the host community.”

Under the organization’s other project, “Project AntiPlastic”, the organisation also aims to reduce the usage of plastic as plastics are now a massive problem globally.

To put things in perspective, only 23% of plastic garbage is recycled in Bangladesh.

It is promoting and training on making clay and bamboo utensils such as water bottles, plates, spoons, that can help reduce plastic usage as much as possible.

Making lights out of these bottles also contributes to up-cycling these waste plastics.

The organisation is also working on recycling plastics into eco-bricks, eco-block and training the underprivileged on how to make them.

The process emits 15.67 million tons of carbon dioxide (CO2) in the environment.

The organisation is developing a portable plastic recycling machine that can be used by anyone to turn waste plastic into plastic bricks, which are cheap but stronger than clay bricks.

It will reduce plastic garbage and also help people to earn a livelihood from selling plastic bricks.

EcoVation plans to launch a project named “PlasticPreneur” once they find at least two to three plastic alternatives.

Similarly, with their plans for the sanitary pad project, they also aim to sell these plastic bricks in order to generate revenue.

For its impactful intervention for Rohingya refugees, the United Nations shortlisted the organisation for Young Leaders for SDGs Award. It also got selected in YSEH Social Enterprise by the UN Major Group for Children and Youth.

The organisation aims to install solar-powered water purification systems in as many places as possible to ensure clean water for at least 1 million people in the next few years.

From 2022, the organisation will go plastic free and will use jute banners for their events.