Kamal Quadir: The artist who became a fintech guru

All Kamal Quadir wanted is to be an artist.

He trained as an artist. He began career as an artist. And now Kamal is a techfin guru, heading the country’s largest mobile financial service bKash.

But that metamorphosis is not a linear story, as it sounds. It sure did take a lot for him to make today’s story.

But Kamal surely is a comeback kid.

At an age when he could barely move his limbs lying in crib, his parents’ house was completely looted and was made the makeshift headquarter by Razakar with the help of Pakistan army.

As the war of independence started on March 26, 1971, Quadir’s family left their Jashore (then Jessore) house because it was too close to the cantonment and risky to live, especially because of his lawyer father being associated with the Awami League politics. So they moved that serene place called Narail by which lapped away the charming Chitra river.

After the war they came back to find their house had nothing left. It was, literally, a new beginning for the Quadirs. From the scratches.

But rebuilding life was cut short again when Kamal’s father died in a boat accident in Manikganj within six months of the end of the war. Kamal was only 16-month-old.

Life, one again, offered a new kind of struggle for the Quadirs – the ten siblings, Kamal the youngest, and their mother.

It was no time for the brothers and sisters to laze around the house. So they went out looking for work.

They were all good in their studies. They got good scholarships. So education came virtually free for them. And their creative brain saw them through to the top rungs in the class.

Trained as an artist

Kamal thought of taking the SAT, the standardized test for college admissions in the US, got a good score, secured a scholarship went to Oberlin College in Ohio.

Oberlin is a liberal arts college. There he trained in art and economics.

But all along he wanted to be an artist. So came back to Dhaka to sell arts and held two exhibitions at Alliance Francaise and Shilpakala Academy.

At such an exhibition Kamal happened to meet then CEO of oil company Occidental who offered him a job. 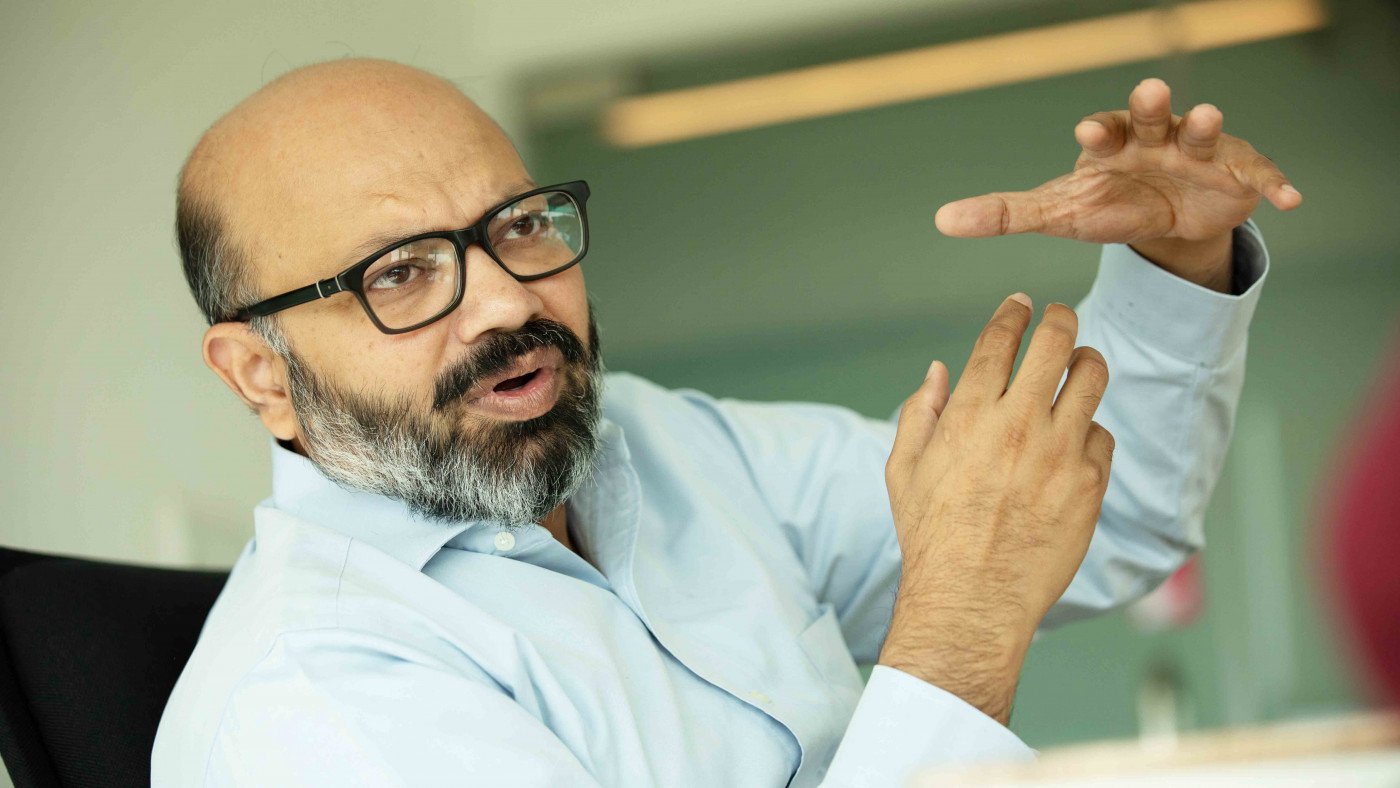 “I thought it will offer me a good chance to know Bangladesh and how it works and joined Occidental. I worked there for three years,” Kamal said. “I started seeing the connection between gas burning from gas fields to rice being produced. In between fertilizer is produced.”

Three years on, he felt like moving on. Doing something different.

And so he and his elder brother Khalid Quadir, currently the founder and CEO of Brummer & Partners, Bangladesh, set up an animation company, GlobeKids, to make cartoons.

“We trained 70 animators all of whom are established now but we could not meet our expectation.  I tried for three years and lost all my all hairs to make the business viable, and failed,” smiled Kamal.

He learned a hard lesson. To make such a venture successful, you need a cluster of the business. A stand-alone animation venture is hard to sustain because you do not get enough of backward and forward linkage. You need local market, you need local TV support. You need certain ecology to support an industry like animation.

So he hung up shoes and set out for doing an MBA at the Massachusetts Institute of Technology (MIT). And in between his studies, Kamal started working with a private equity fund named Insight Venture.

“After completing MBA, I started thinking what I really want to do in life.

It was then clear to me that I belong to Bangladesh and I need to go back,” Kamal narrates sitting in his Sena Kalyan building office.

In his jeans and sky-blue shirt, with greying beard and a shiny head trimmed by greying hair, his eyes blink brightly behind heavy-rimmed glasses. For his sartorial makeup and easy-going attitude, he does not look the tech guru that he is today.

But then that is what Kamal Quadir is all the way.

So, on August 14, 2005 Kamal Quadir landed with Dhaka and with that began the journey of the country’s largest mobile financial service that has made financing inclusive for millions, largely the poor.

But first he thought of the mobile phone as a democratizing tool. Everybody has it, everybody uses it. Then why not make it a tool for business.  So that the market failure of supply and demand can be addressed.

With that idea in mind he launched CellBazaar, the first online classified ads platform in Bangladesh.

“I thought that we can do something with that. With this phone you can post what you want to sell, somebody with this phone can also pick up the information that what is available in the market. This thing can solve a market failure and solve a supply demand thing.”

“This CellBazaar took me five years to bring a shape. It went very well. A small and cute company with only 19 people.” to

Then as it happens with any startups, Telenor snapped it up.

By that time, Kamal had something else in mind.

The rising use of mobile phone gave him the idea that this electronic device can be used in financial transactions. The idea also was aligned with the thinking of the Bangladesh Bank and the government about digital payment settlement to improve financial inclusion at around 2009.

This is also cost effective. Because when a person goes to a bank and transacts, it costs the bank Tk 128. This is simply not viable for the common people like a rickshaw-wallah. A rickshaw-wallah at best transacts Tk1,000 to Tk1,500 at a time and for that if the bank charges him Tk128, that makes no business case. And that is why so many of the poor are outside the financial system.

“No matter how much the bank or the government wants, this model will not allow financial inclusion,” said Kamal. “So I thought of a system that would protect the client’s interest by remaining fully regulated by the Central Bank and at the same time, reduce the cost of transaction.”

With the idea of using mobile phone in financial transaction, he met with Brac’s founder Sir Fazle Hasan Abed to during his preparatory work.

“I chose Brac for multiple reasons, one is that it has presence across the country. We need credibility which Brac has.

Moreover, Fazle bhai has the vision to create a viable business to serve the poor. This alignment with common philosophy and objective gives a sense of bringing a possibility to make the idea successful,” said Kamal.

Brac accepted his idea and he was suggested to go around the world in search of knowledge and idea about what has been happening on the mobile platform.

Kamal started travelling across Africa for multiple times as this kind of initiative was taking place there.

“I learnt a lot from the African initiatives and on August 26, 2008, I made my first presentation to Abed bhai.”

Abed introduced him to Brac Bank because a financial institution is required by Bangladesh Bank to ensure regulatory compliances in order to protect the clients’ fund.

“After long research, we formed the company bKash at the beginning of 2010 with a 51 percent ownership of Brac. The rest 49 percent share was owned by a company named Money in Motion.”

Money in Motion was formed by Kamal, his brother Iqbal Quadir, the founder of Grameenphone, and a few US based investment institution.

The Bangladesh Bank gave license to bKash on 12 April 2012 to operate as a subsidiary of Brac Bank.

In 2013, International Finance Corporation (IFC), a wing of the World Bank Group, became a partner of bKash. The next year Bill & Melinda Gates Foundation became a shareholder, and lastly in 2018, Ant Financial, known as Alipay, an affiliate company of the Chinese Alibaba Group, became an equity investor of bKash.

When a person is registering an account it seems very simple a process but it actually is a tremendous technological work. When the client uploads a photo and voter identity card for registration, the technology takes nanoseconds to match the information with the government’s central database.

This biometric facial recognition technology was developed by Alipay.

And today bKash has brought revolutionary change to the lives of the rural people, allowing them to make financial transactions in an easy and fast way without having any bank account.

bKash is now the market leader in mobile financial service, holding around 50 percent of the total mobile banking accounts.

It has 3.5 crore account holders out of 7.2 crore of all service providers across the country.

Being the market leader in mobile financial service, bKash has a tall task of challenges ahead.

“The first is to make more technological investment in fraud prevention,” Kamal points out.

“Ours is a robust technological system and yet we face frauds. Interestingly, all the frauds occurring now are social engineering. Fraud pattern is changing day by day and bKash has formed a big team to keep its continuous effort to fight with the changing fraud techniques.”

The next challenge is deep linking with the banking system.

“bKash is now working on to develop inter-operability system with all banks so that clients can transfer their money to bKash account from their bank account sitting at home. The system was already developed with nine banks. 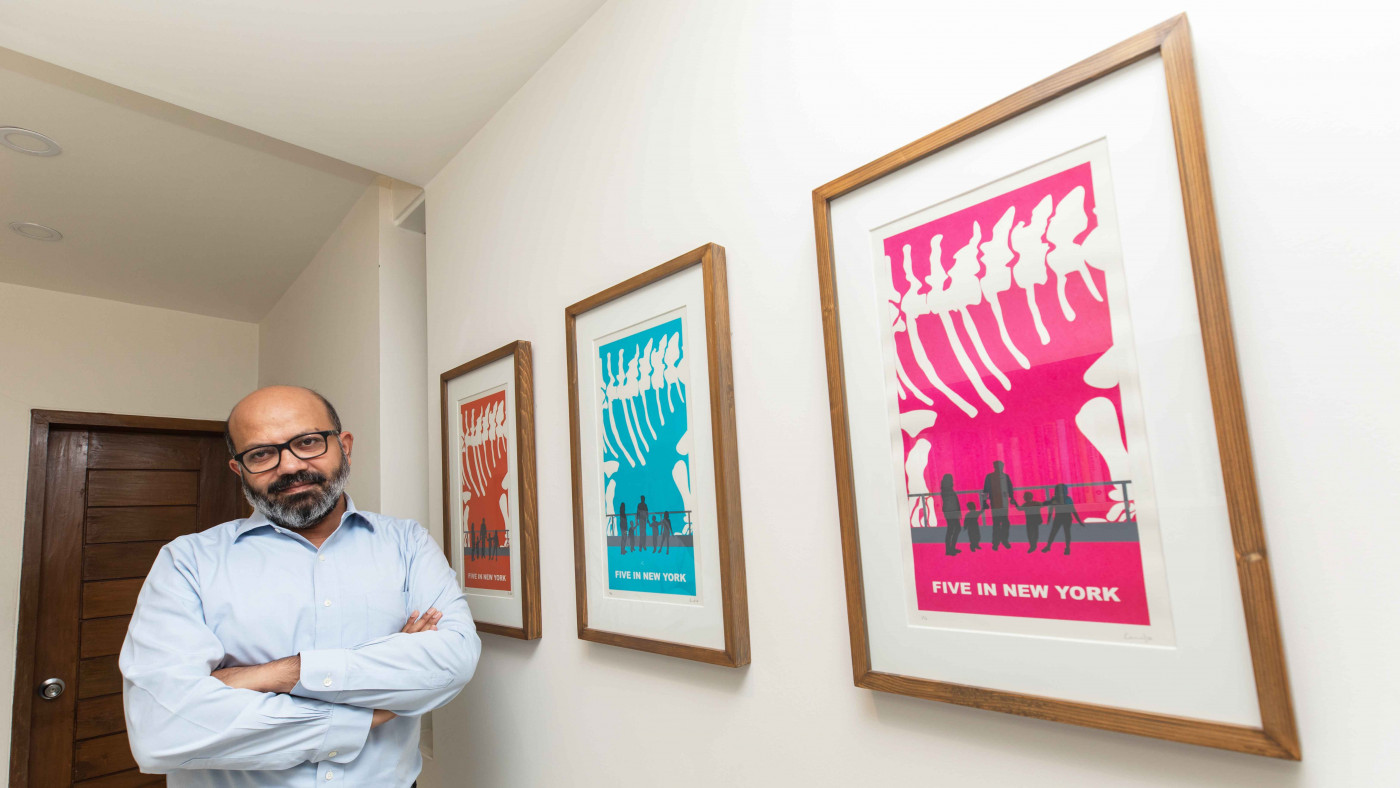 Kamal Quadir is standing in front of his own exhibited posters. Photo: Saikat Bhadra

“We are also working with central bank to expand the inter-operability system,” he said.

If a bKash account is connected with a bank account, the cost of mobile financial service will reduce drastically and large number of unbank customers will be able to get banking products in the areas of savings and credits.

Currently, bKash charges 1.85 percent for cash-out through agents but if it is done through bKash app, the cost is reduced to 1.75 percent.

All payment services are free of cost for customers. In future bKash will make payment system even easier like it will not require pin for transactions, rather facial recognition system will do the job.

We developed a new app with completely new investment. Some interesting features included with the app like geo-locking which means customers will get verities of information of their physical location to make economic decisions.

We seeing lots of competitions are coming in the market with new entrants like Nagad and Dmoney.

“bKash will focus on service quality and customer and market centric innovation in order to compete in the market,” he said.

Back to the basics

And so what is Kamal Quadir’s next level of ambition?

Kamal smiles and carries the next level of conversation to his own office. It’s a cozy room and on the walls are displayed artworks of SM Sultan and Shahabuddin, two artists who individually inspired him.

A lobby is lined with a bookshelf. And in the lobby are the silk-screen prints by Kamal himself.

From hi Sena Kalyan building room, you can have the best view in Dhaka – the whole expanse of horizon across the Tejgaon airfield.

In the corner is a beautiful wooden ornate sofa. But that’s actually not a sofa but a very old wooden chest, one of the traditions that Bangladesh has lost over time. “Once upon a time, most villages in Bangladesh had these kind of crafts; quality stone is not naturally found in Bangladesh, our artisans mostly practiced their skills with terracotta and wood.”

“Well, nothing much except for taking bKash to a higher ground,” smiled Kamal. “And do some artwork for own relaxation.”

After all, that is all he wanted to do in his beginning.