In the beginning, a kilogram of this famous chanachur was sold at Tk5 which has now risen to Tk180! And with a trajectory as such, this iconic business has an amazing story.

A serious-looking vendor shaking a little pot full of chanachur, peanuts, tomato, onion and a ‘special’ spice mix in front of a 6 feet tall yellow van which has ‘Jamai-Bou Special Chanachur’ written in Bangla with very prominent red ink on its glass walls – is probably one of the most iconic scenes of Dhaka city.

Every day after 4 pm, you are most likely to encounter such a ‘chanachurwala’ in the capital’s Banglamotor, Motijheel, Moghbazar, Paltan, Shahbagh and other major points. Jamai-Bou chanachur- with this unique name and iconic yellow vans, has been doing business for the last 30 years.

In the beginning, a kilogram of this famous chanachur was sold at five taka which has now risen to Tk180! And with a trajectory as such, this iconic business has an amazing story.

In the year 1990, a 35 years old Golam Mostafa started his journey from Rangpur towards the capital Dhaka. Holding his young wife Golilur Begum and a 10 years old son Ruhul Amin’s hands, young Mostafa came to this city and settled in a rented room at Shakhari Bazar in Old Dhaka.

To earn a living, the young couple started a small snack business there. Golilur Begum is used to making chanachur, a fried snack made from dried chickpea paste, mixed with peanut and homemade spice mix, at home. Golam Mostafa sold this snack at Soni Mandir near Shakhari Bazar where in a few days their chanachur became known as the ‘Jamaibabur chanachur’. 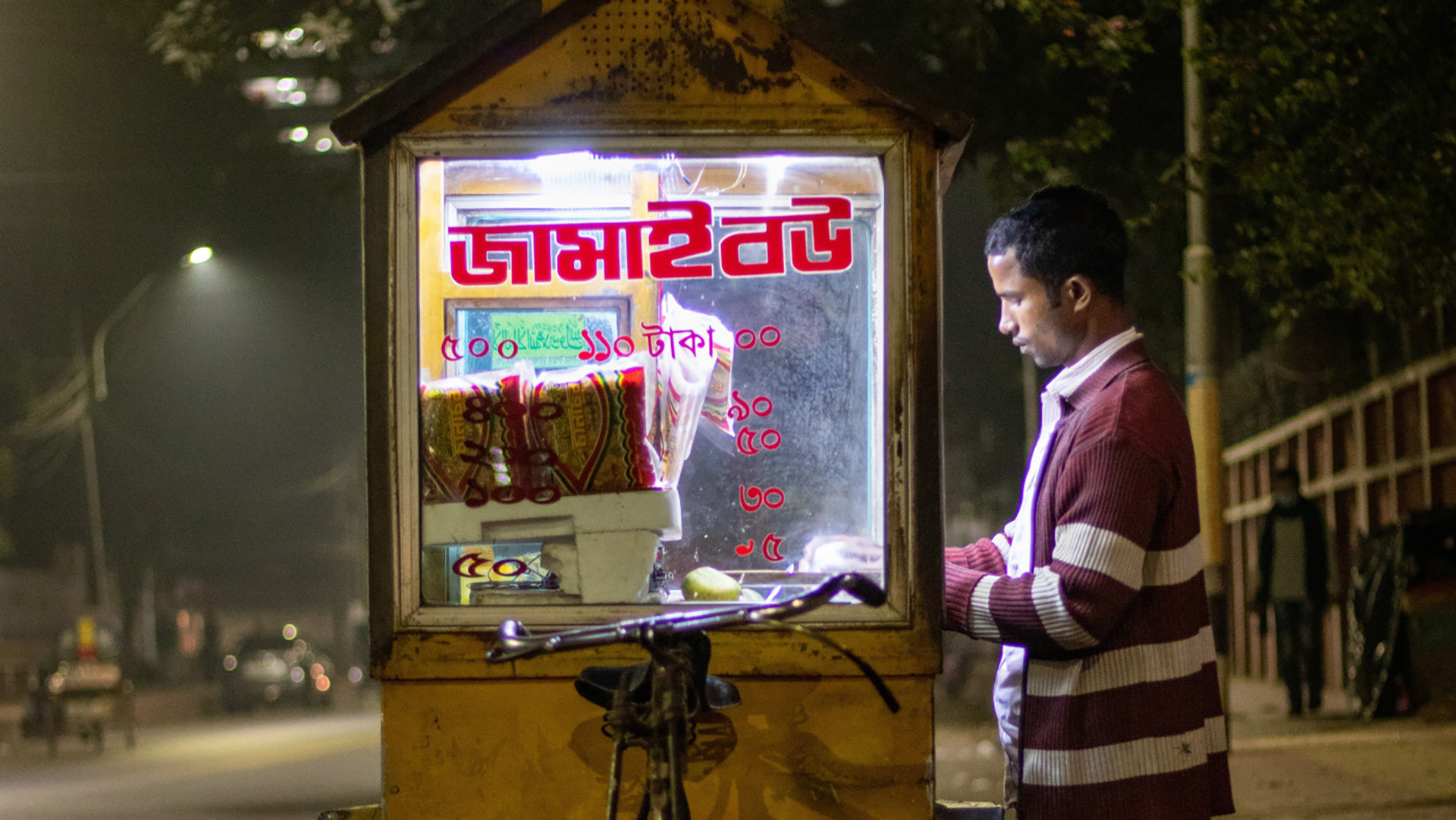 The chanachur company has 45 vans that sell the snack across Dhaka and Chattogram. Photo: Saqlain Rizve.

“Back then it was primarily a Hindu-populated area. The locals used to call my wife as didi, hence I became the jamaibabu or the brother-in-law”, Golam Mostafa took me on a trip down his memory lane.

Slowly their sales increased as in a few months the couple started selling 20-25 kg of chanachur every day. As their popularity rose, everyone suggested, “Why jamaibabu only? It is the couple’s initiative, it should be called Jamai-Bou chanachur”. So at the beginning of 1991, Golam Mostafa and Golilur Begum launched the Jamai-Bou brand chanachur.

Ruhul Amin, that little boy, now a 40 years old man himself, remembers the days when his mother fried chanachur. “I can still see that twilight-dark small kitchen. Her face was half lit from the light coming from the window. Into a large pan-full of hot oil, she used to drop the turmeric-yellow chickpea flour batter, and I can still smell that yummy aroma.”

Till then for the last 30 years, Jamai-Bou chanachur has become a popular street snack brand in the capital Dhaka and their 6 feet tall yellow vans are ubiquitous across the city.

Currently, the chanachur company has 45 vans that sell the snack across Dhaka and Chattogram. You will find Jamai-Bou chanachur vans at Banglamotor, Motijheel, Moghbazar, Paltan, Shahbagh and other major points in Dhaka. And in Chattogram, the yellow van will appear in GEC More and Andarkilla.

But the business is going through a tough time especially after the pandemic. While the founder Golam Mostafa is currently working in Chattogram to expand his business, his son Md Ruhul Amin is overseeing the business in Dhaka.

“Before the pandemic, we used to sell 300-400 kg chanachur everyday. But now, the sale has decreased to 70-100 kg per day due to the overall market fall and also because of the current price hikes”, Amin explained.

A bigger problem that the company is dealing with

It was in 2018 when Golam Mostafa went for a partnership with another businessman of old Dhaka. “Initially the business was going good. But in 2019, our factory in Begumganj was burnt in a fire. And then the problems arose”, Amin shared with a trembling voice.

After the fire, the chanachur company took their factory to Rangpur and currently three workers are working in the factory.

But another problem appeared. “Our partners stopped sharing the profit with us but they are still using the brand name. That other company has 10 vans, they have another factory where they produce chanachur of their own recipe. So it is a matter of reputation now”, Amin said with a worried look on his face.

Md Helal Miah has been selling Jamai-Bou chanachur for the last 20 years. “I came from Rangpur to this city and this is something that I have been doing since then”. But Helal Miah is now planning to let go of his yellow van.

“The company is now in a very bad shape. The pandemic and the price hike have already weakened its structure. But the more pressing issue is that the owners lack proper coordination. And if this continues, the company will fall for sure,” said Helal.

So now Helal is planning to return to his ancestor’s place and with the experience that he gained in the last 20 years, plans to start his own snacks business.

Abdul Motaleb, another vendor of the company, stands at Moghbazar with his van. With white hair and beard, 65-year-old Motaleb has been selling chanachur for 25 years. “This chanachur has a fan base across the city. Every day I bring 70-80 kg chanachur and at the end of the day my van is empty, Alhamdulillah!”

But Motaleb is now planning to do something else as he believes Jamai-Bou has lost its ‘barakat’ (good fortune).

According to the vendors like Helal Miah and Abdul Motaleb, Jamai-Bou needs a worthy successor and Ruhul Amin, the owner’s son is not the one. “A very religious person, Ruhul Amin is always found in mosques praying. It is good, but he needs to concentrate on the business as well”, Md Helal Miah was almost complaining.

In his defence, Ruhul blames his father for the partnership he made. “My father should solve the issue with the so-called ‘business partners’. This is bad for our reputation.”

For Golam Mostafa, Jamai-Bou is a brand that he built with his wife and he is still hopeful for the business that he has seen grow for the last 30 years.

“True, my company is not in a good shape right now. But as long as I am alive, I will not let my company fail,”  Mostafa responded with an emotional tone in his voice as he talked about his business.

And maybe that is the reason, away from his family, Mostafa is trying to spread his ‘Jamai-Bou’ brand in Chattogram. Every day at 3 pm, he gets out with his yellow van full of chanachur that comes from his factory, bags of tomato, onion, chillies and a special spice mix.

Golam Mostafa, now 60 years old, is still wandering around another city, trying to carry something he created that has become mired in mismanagement. He hopes to detangle everything and get it back on the tracks of good fortune.