JaduPC: Cutting the right corners to deliver on performance

Can a computer be cheaper than a smartphone and still perform like a brand device? JaduPC, a company based in Bangladesh, aims to offer computers that are both affordable and high-performing in the local tech market.

Look up the words “budget PC build” on google and you will likely find something worth at least Tk20,000. But what if you could get the same performance for one-fourth the cost?

Enter the JaduPC — an amazingly low-cost computer, starting at a mere Tk5,000, that performs just as well as a standard brand computer, thanks to its use of cutting-edge hardware and its proprietary operating system, ShopnoOS.

The engineers at JaduPC have successfully integrated the hardware and software to create a smooth-running device that is capable of handling many tasks efficiently. ShopnoOS is easy to navigate and it runs Photoshop, VS Code, and browsers with multiple tabs just like any other standard computer.

The company’s founders — Masrur Hannan, Ragib Ehsan, Mahmudul Kabir, and Tahmid Abir — spoke to The Business Standard about the company’s vision and the challenges it faced in manufacturing computers that are cheaper than smartphones, yet perform on par with more expensive brands. The vision behind JaduPC is simple: to make computer ownership more accessible in Bangladesh. 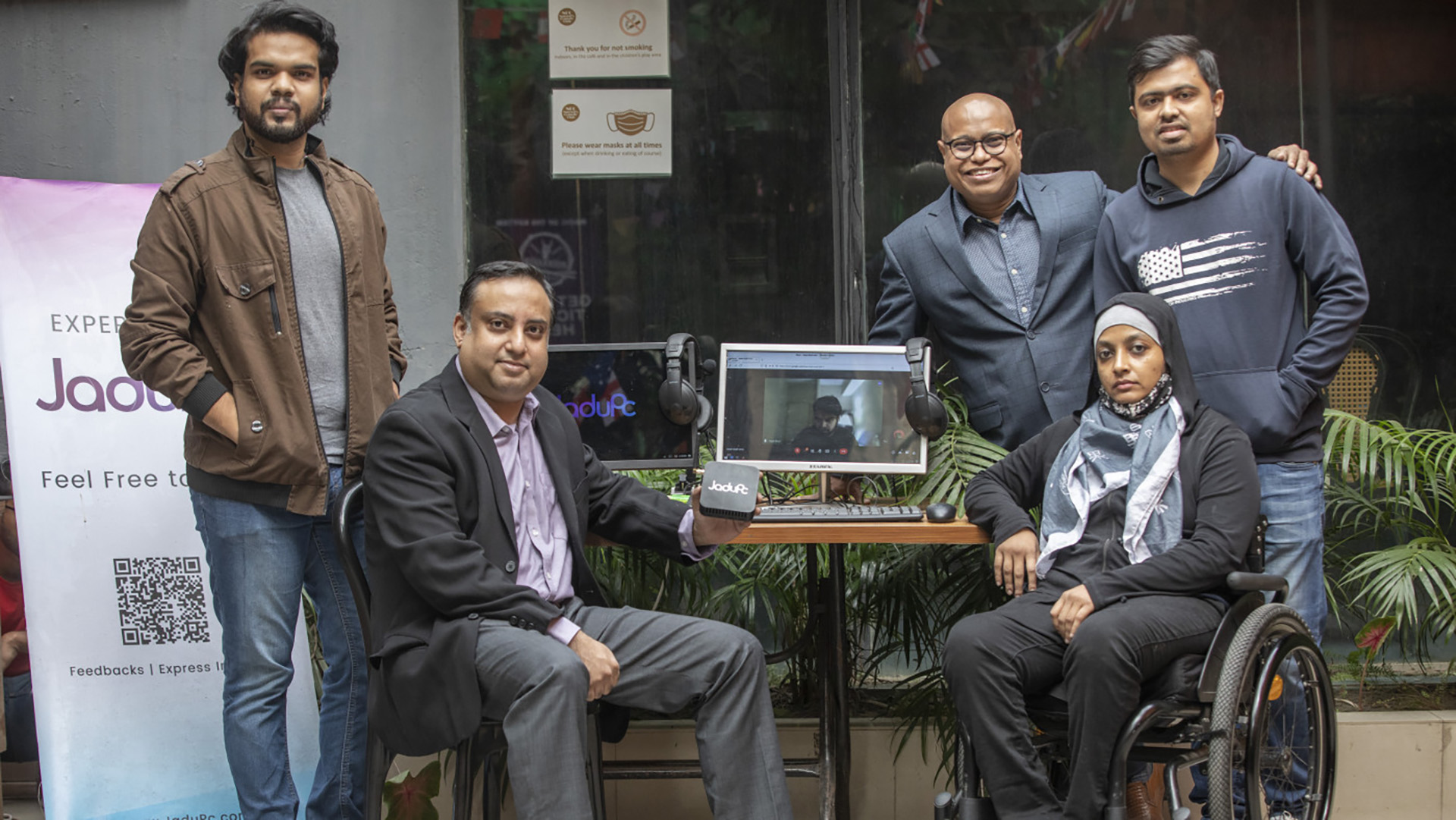 The team behind JaduPC. Photo: Noor A Alam

“Our lives transformed after my family got a computer when I was a kid. I understood one thing from my childhood — computer literacy can change lives. My father started getting better job offers and I am now studying IT Security at Ontario Tech University. It was that PC that started it all,” says Ragib Ehsan, CEO of JaduPC. 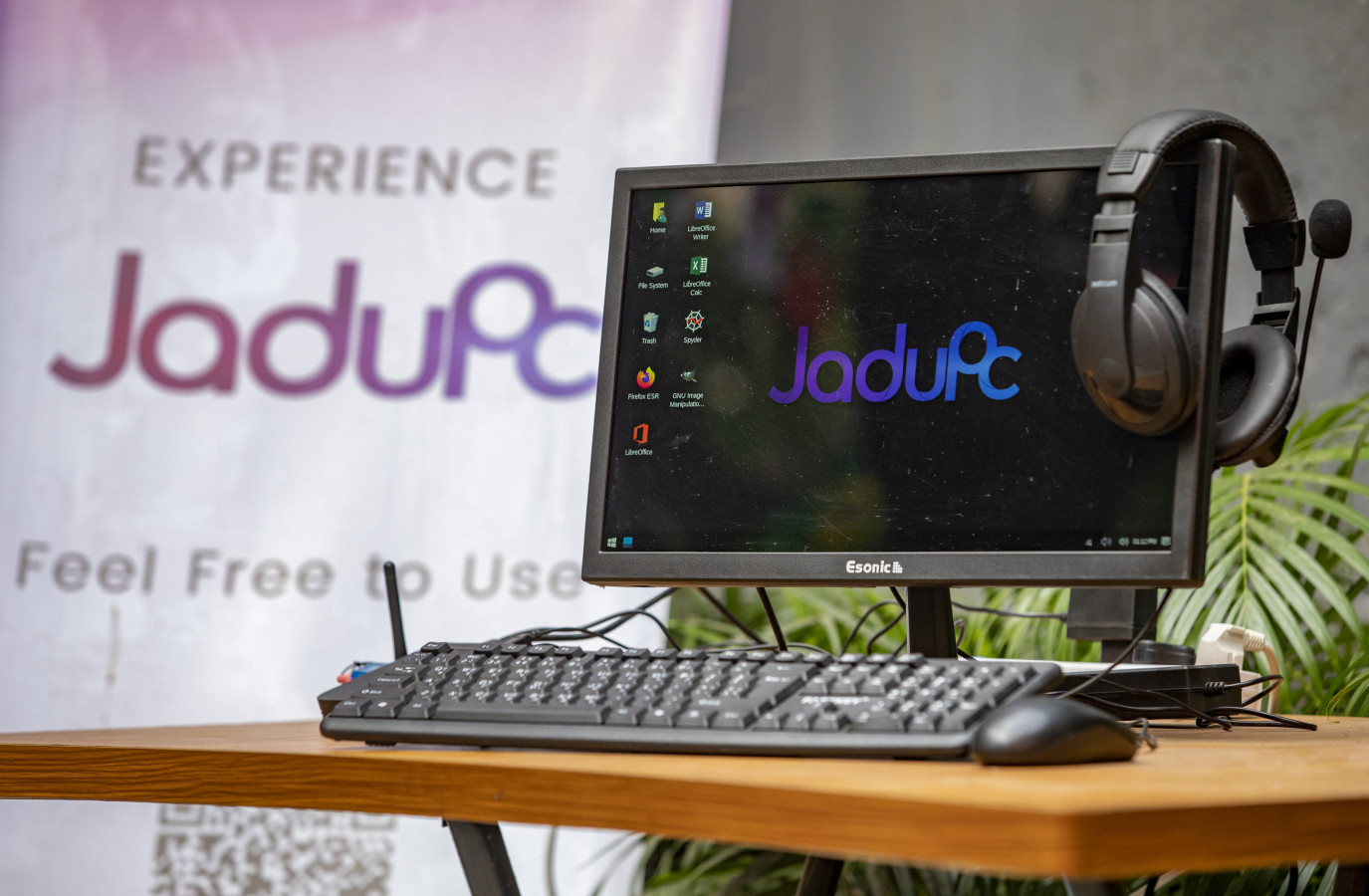 “Everything exemplary that has happened to me and my family is because of the computer we had at home,” he added. While sharing the story of how the company was founded, Masrur Hannan, the founder of JaduPC, said, “In 2014, I had the idea of creating a device similar to a television stick that could be used with a TV to provide educational content and other resources. A friend suggested that this idea could be turned into a bigger project if we turned it into a computer.

“I took this idea with me when I went to the UK to pursue a Master’s degree, but my department was not accepting any new projects at the time. Despite this setback, I eventually turned this idea into the company that is now known as JaduPC,” he added.

In 2018, Hannan managed to develop an android environment for the company’s computers but encountered stability issues. The project remained stalled for a while, but after coming across a recent social media post about Ragib Ehsan, who had solved the software issue, the project jumped back to life again.

Hannan contacted Ehsan, had a meeting the following day, and offered him everything he had worked on so far because he saw the same vision in him. Ehsan is now leading the project, while Hannan supports him occasionally.

“The company has prioritised using innovative technologies to enhance the cost-to-performance ratio and offer users a device with capabilities comparable to those of a traditional laptop in the Tk40,000 to Tk50,000 price range,” Ehsan said.

“To achieve this, JaduPC uses processors with the ARM Cortex A45 architecture rather than traditional x86 architecture, as well as NAND flash storage and an SD card slot for expandability.

The device also has 4GB of DDR3 RAM, which is optimised to allow for smooth multitasking and running of programming environments, multiple browser tabs, and videos simultaneously,” Ehsan added. 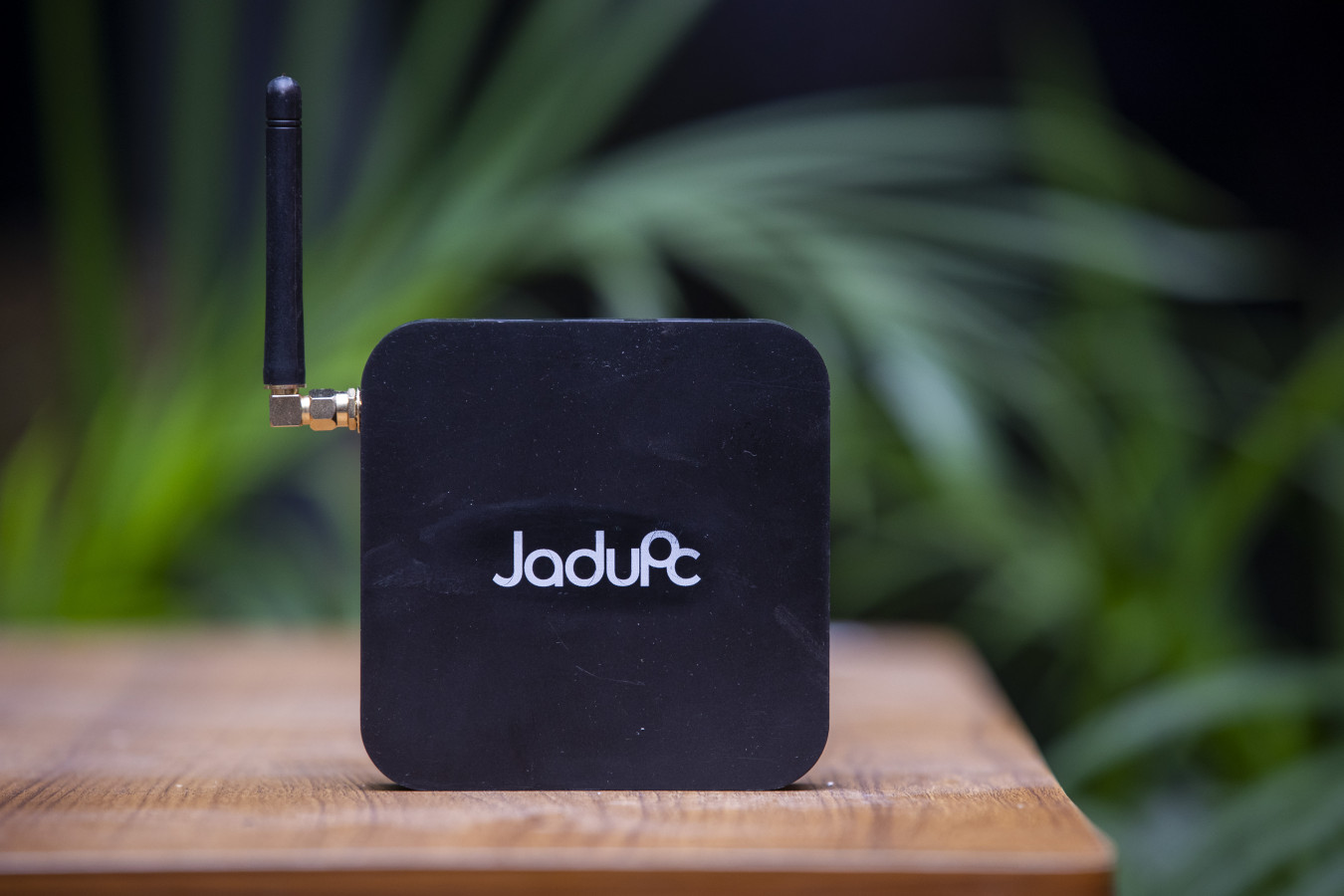 To address the first challenge — minimising the cost of production to keep the device inexpensive — JaduPC produces both hardware and software for its products. The hardware is sourced from China, and the company is in the process of finalising its own designs for single-board computers.

The operating system, called ShopnoOS, has been custom-built by Ehsan. The deployment process, which includes hardware testing and quality control for the integration of the operating system and applications, is overseen by the CPO, Tahmid Abir, at the JaduPC laboratory in Dhaka, Farmgate, Monipuri Para.

JaduPC’s next challenge will be bringing its products to rural areas where they can be used to promote computer literacy. To achieve this, the company is working on establishing partnerships with non-governmental organisations and the government of Bangladesh. This will allow them to reach more people in need of computer skills and help them get started with computer literacy. 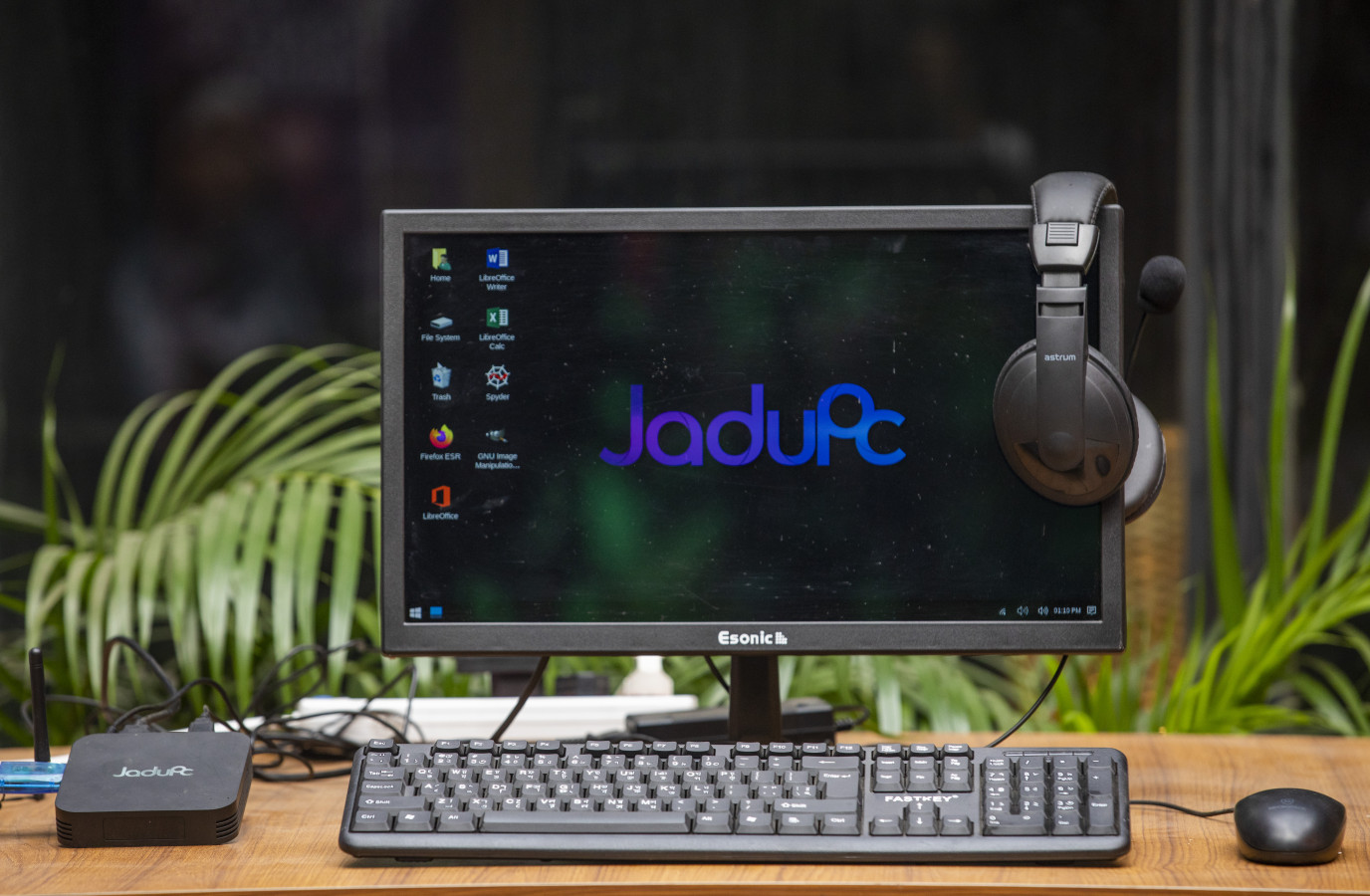 According to a report published by the United Nations this year, a large percentage of youths in Bangladesh lack essential digital skills, which is hindering their career prospects. And a report from the International Labour Organisation predicts that Bangladesh will have an unemployment rate of 3.6 million in 2022. One way to address this issue is to increase computer literacy among young people in the country.

JaduPC is attempting to do this by producing affordable computers, which will enable more young people to learn and practice computer skills, regardless of their financial situation.

The team behind JaduPC is committed to making a positive impact in Bangladesh and plans to reach those who will benefit most from their innovations.

The company has made some changes to its structure and models, but it is still experiencing significant growth. They are currently producing single unit desktops with various options, and have recently started delivering their first units. Overall, it seems that the product is off to a strong start. The company is offering three devices at the moment: JaduPC Mini, JaduPC Surface 7, and the JaduPc Surface 10.

Currently, the company is focusing on offering its products through a business-to-business model, primarily to schools, NGOs, and other organisations. However, individuals will have the opportunity to test and pre-order JaduPC products from Naveed’s Comedy Club in Gulshan 2 and several co-sharing workspace locations in Dhaka starting in the first quarter of 2023. Purchases can also be made through the company’s website – jadupc.com.

Mostain Billah, a user of JaduPC, reports that his “overall experience with the product has been positive”.

“The service we have received has been excellent for such an affordable computer, and it is particularly well-suited for beginners of programming, especially for the Go Programming Language,” Mostain said.

This innovative company is currently delivering its product in limited quantities and working directly with companies such as iFarmers and Shohoz. In the short term, the company plans to increase production and create different variants based on customer needs. The company is also committed to listening to its users and doing what is necessary to meet their needs.

A self-funded project, JaduPC recently got a shot in its arm after receiving its first angel investor. The particulars of the investment plan have not been disclosed by the company, but their team is expanding and looking to hire more people to join its team of 10 members.

Recently, the company appointed Naveed Mahbub, the former CEO of IBM and Nokia Siemens Networks Bangladesh, as its chairman. This addition is expected to help the company continue to grow and scale its operations.