How Brain Station 23 Was Created

Question: Tell us about the path to becoming who you are today as well as how you came to found Brain Station 23?

Raisul Kabir: After getting into BUET, I did tuition for a while which most BUETians do. I was earning good money but was not satisfied because I felt that I was not helping students to become really good. And at one point I quit tuition.

I used to work as a part-time programmer even before my BUET admission, largely for free. I first started working in 2000 at a company called DPath for free. I helped make a portal for them. Then I worked at another company called Western Network, again for free. I used to do web design there.

After quitting tuition, I started working as a programmer professionally in 2001 in Sonar Courier. My salary was BDT 2000 at that time whereas I could earn BDT 15000 from tuition. After some time at Sonar Courier, in 2002 I moved to Paradigm, now Paradigm Group. I used to do web design and other stuff there. At Paradigm, I used to do the coding and programming for 30% share of a project value and other partners used to do the design, marketing, and other stuff.

I was earning on an average BDT 20-30,000 monthly. Since we were earning good money, I proposed to start a company. So we started a company in 2003 called Paradigm NeoMedia, a web design, and IT solutions provider. We had Tanvir bhai, who was a designer, probably the best designer at that time.

I always wanted to grow fast and employ a lot of people but at Paradigm, we were not growing. After a while, we realized that it is very difficult to make money from doing web design business. So In 2005, I was still in BUET, I decided to left Paradigm. I had a 30% stake in the company, I gave up on it. I then started doing freelancing on a platform called getafreelancer.com and started to earn a hell lot of money.

After a while, I realized that I could get more work and earn more money. That’s when I thought of starting a company. Back then I was also working part-time at Latitude 23, one of the best 3D visualization companies in Bangladesh, founded by our elder brothers from BUET. I helped to make their office management software.

After that, they got a quite big project of flash and gave me the responsibility to manage it. This was in 2005 and I was still in BUET. I then hired 10 people contractually and executed the project within three months. The client was very happy and the Latitude was also very happy.

Latitude 23 had other foreign clients who wanted software support and other stuff. So they asked me whether I would be interested in a partnership with them and start a software company. I thought why not. I was studying EEE in BUET all these years but I was working in the software industry. I was passionate about EEE from my childhood. EEE had very good demand in the market at that time, good job and good salary were easy to get. 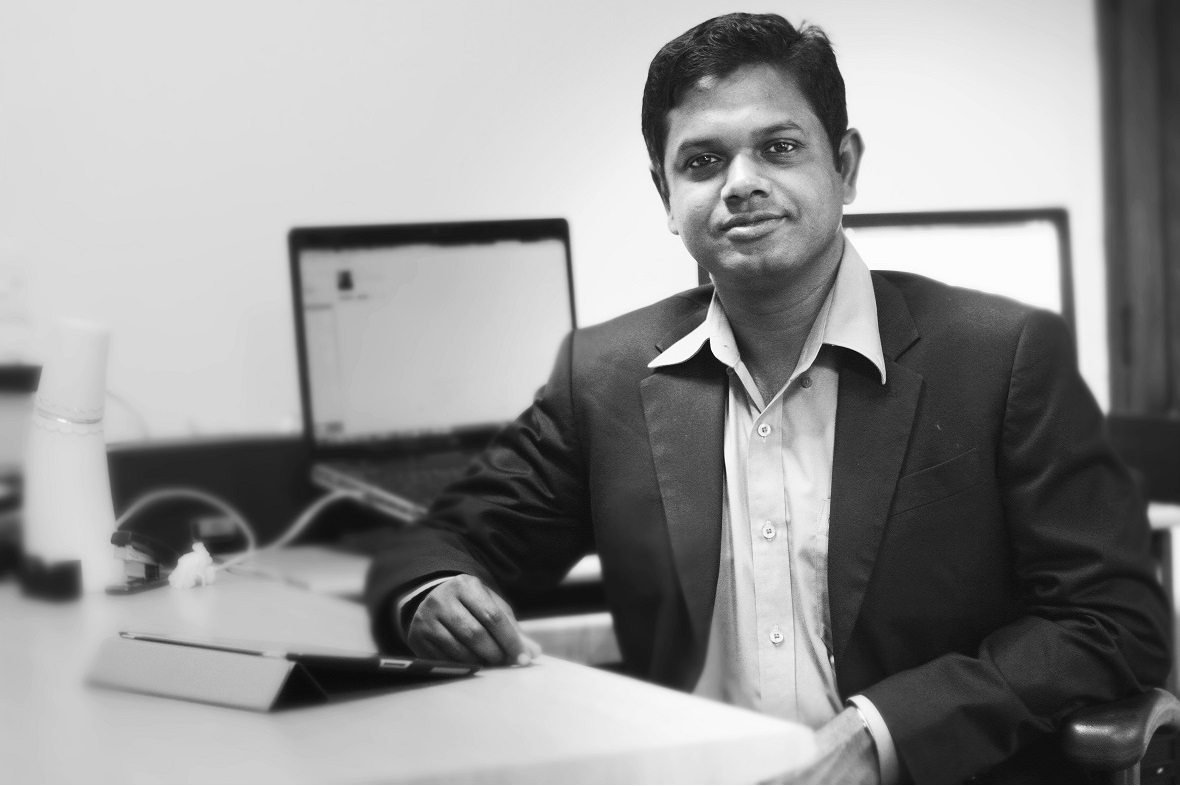 Contrary to that, computer science was not a big thing yet. I was quite confused about what to choose after the offer.

During that time, Latitude 23 went to India and they brought me a book on Narayan Murthy of Infosys. Infosys was already a huge company at that time and was employing over 56000 people. I thought well this is incredible. These people are earning foreign currency and also creating huge employment opportunities for the country.

Then I thought I got all the chances in life, I went to the best school and the best university, I have some responsibility to my country. After much thought, I decided to move ahead with Latitude and give up my EEE career.

I’m not an entrepreneurial person. I don’t exactly feel comfortable with taking a big risk. But I knew if it did not work I could go back to freelancing and get my family going. Since we are a middle-class family, we don’t actually need much. We are used to living on less and go by it. After all these thoughts, we finally started Brain Station 23 in partnership with Latitude; the name came from Latitude 23. 50% owner of Brain Station 23 is Latitude 23.

I was still a little in doubt, so I went to Omar Al Zabir, he was my school friend. In fact, I first came to know about computer programming from him. He has been doing programming from a very early age. Initially, he did not have a computer and used to program on paper and then go to one of his elder brothers who had a computer to code those things from Paper to a computer. He bought a computer in class eight and that was the first time I saw a computer. I was not as tenacious as Omar but I was influenced by him. I got my first computer when I was in HSC. My uncle gave me a computer because my parents could not afford one.

So before getting into Brain Station 23, I went to Omar and told him that I’m starting a software company what do you think. We were not in touch for a couple of years in between so he said you studied EEE what do you know about computer, how are you going to do business. I said I know a little bit of programming and have been working on PHP, ASP, CSS, HTML and other languages.

Then he asked me that ‘you know HTML, CSS, can you do cross-browser development, I said yes. Then he asked me to join his company as a part-timer. I agreed and joined Pageflakes as part-timer because Omar was my Idol and having an opportunity to work with him was a huge thing for me. They also raised a huge amount of funding from VCs like Benchmark and others and was one of the fast-growing startups at that time. I used to work part-time for Pageflakes and then part-time at Brain Station 23.

I used to earn good money from PageFlakes, so I did not take any salary from Brain Station. I worked there for a year from mid-2006 to mid-2007.

In 2007, there was political instability in Bangladesh so they moved to Malaysia. They asked me to join them but I did not. In fact, they wanted to acqui-hire Brain Station but after much thought, I decided not to go. After that, I concentrated full time at Brain Station 23 and started to take a BDT 10,000 salary. Pageflakes was offering me around BDT 2 lac in salary. Instead, I started working at BDT 10,000.

I always took less salary and my partners always encouraged me to take a salary that I needed to maintain my lifestyle, “if you make a profit you can take it but salary is always for maintaining your lifestyle”. Well, that never happened because we always reinvest what we earn. Even these days my salary is below our Project manager salary slab in our office. So still these days I live in a rented apartment but now that I have kids I feel that it would be great to own an apartment!

Question: Tell us about the early days of Brain Station 23.

Raisul Kabir: I was very lucky in a sense that we did not have to struggle a lot. Since it is a service business, we did not have to invest a lot of money from our pocket. Moreover, I was (am) used to making sacrifices. I never wanted to earn a lot of money or travel a lot or buy expensive clothes. It made it easier for me to take things easily. I’m used to taking the local bus and do things in a very middle-class way. In fact, when things get better I feel a little bit of discomfort.

The thing that helped us very much during our early days was our vision. We started Brain Station for a reason which was way bigger than money or any material goal. We had a common vision. We wanted to achieve something bigger than ourselves as opposed to building a mere business. As a result, everyone in the company was happy and used to feel empowered and part of something bigger.

People usually want to be a part of something noble. We had that thing. As a result, people used to stay with us for a long time. Our employee turnover rate is very low. Our first employee stayed with us till the day he left the country for Germany. It is not like that we pay a huge salary. We do pay a good salary but we are not the highest paying company. We pay better than average companies but we have consciously made the decision that we will never be the highest paying company because we don’t want people to come and work for Brain Station 23 for money rather for the cause and passion. We want people who are ready to sacrifice for the vision we have.

The way we work is very democratic. We tell people that this is your company. We are working towards a goal, let’s build the company. We empower people like anything.

At Brain Station 23, our developers work directly with our clients, a very uncommon norm. In many companies, developers leave the company with clients but it never happened to Brain Station.

At Brain Station, transparency is an important value. Everyone who works on a project knows how much we charge a client. It creates a lasting bonding among people based on trust. We are a flat kind of organization. There is no bossing or sir culture here. We don’t encourage it either.

Question: How many people were with you when you started?

Raisul Kabir: When we started in 2006, we started with a team of 4 people. We had contract/work for two of them. We used to pay BDT 10 to 12000 salary to each of these two people. But with the profit, we made from our work we hired two more people who did not have work at the point. That is how we continued growing. Whenever we had extra money, we hired more people.