Over the course of eight years, Footsteps has designed and implemented numerous social ventures that have positively impacted the lives of 150,000 people in 17 districts across Bangladesh

A few years ago, Shah Rafayat Chowdhury, a co-founder and president of Footsteps, and his team installed a Trishna water station in Moonda Government Primary School in Uttar Khan, right next to the Turag river. Since the school used to get water from a source contaminated by the river pollution, the staff and students lacked access to safe drinking water.

Just as he and his team were about to leave the school after finishing their work, a student came running up to Rafayat saying with excitement, “Bhaiya (brother), our water no longer smells bad. Thank you.”

This is one of those incidents that has kept the entire Footsteps team moving, despite all of the challenges they have faced since their beginning in 2013.

“We are constantly reminded of how fortunate we are to have been born privileged, and we have something to give back when we are on the ground implementing our projects and talking to people to learn about their struggles,” said Rafayat, during an interview with The Business Standard.

“It is not the awards and recognitions we have, but the impact we bring to the thousands of faces on a daily basis through our work that motivates us to keep going,” he added.

Since 2013, Footsteps, a next-generation organization that works to assist marginalized groups in overcoming social challenges, has improved the lives of over 150,000 people in 17 districts across Bangladesh through their four social ventures. 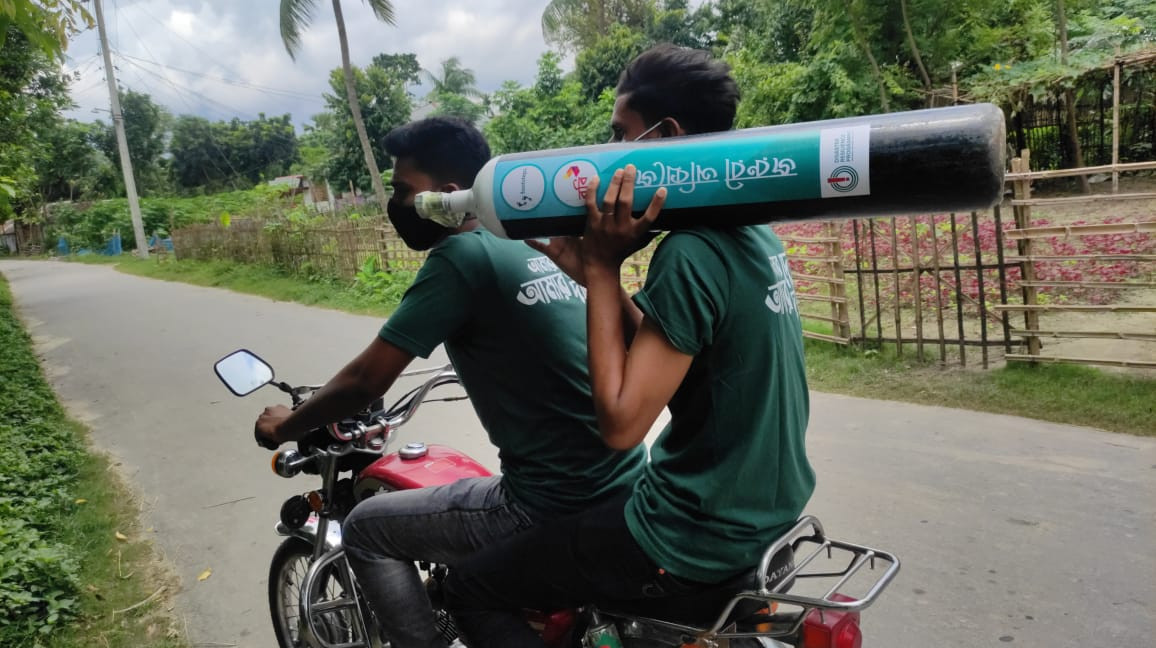 Footsteps raised funds for over 100 oxygen cylinders through individual donations, which have already been distributed across seven districts in Bangladesh. Photo: Courtesy

Project Trishna is the first of these social ventures, in which they “use the platforms of corporate social responsibility, donor and government funding to implement facilities such as drinking water systems, handwashing stations, and gender equity toilets,” as Rafayat describes it.

“We also provide training on how to maintain these resources, both technically and financially, in order to eliminate the need for donor intervention in the long run,” he continued.

Their second venture – the Disaster Resilience Programme (DRP) – which, “Not only focuses on providing survival aid in the form of food, water, medicine, and hygiene materials to residents of disaster-affected areas, but also increases their capacity of becoming resilient through disaster warning mechanisms, climate-resilient housing, portable water filter, and agricultural support schemes for farmers,” in the words of Mustain Karim Chowdhury, a project coordinator at Footsteps. 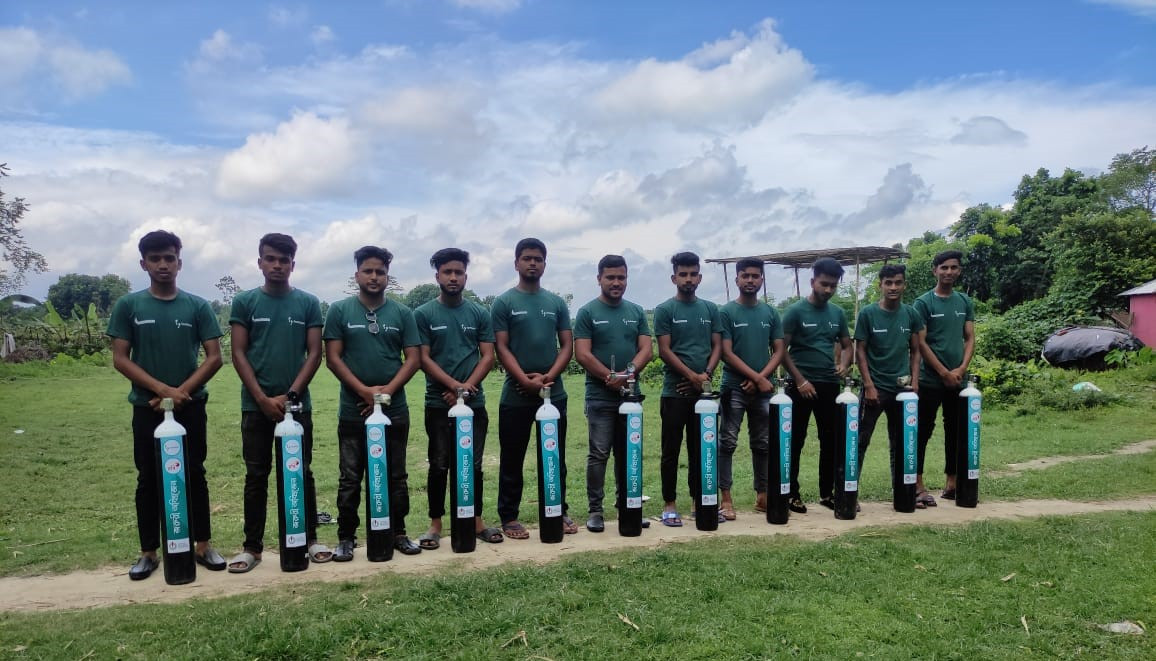 The third, Sushasther Odhikar Shobar (SOS), as Rafayat informed, is currently being redesigned to include more aspects of public health improvement, such as building ambulances, organising medical camps, and so on.

The funds used to run these programmes are provided by international organizations such as Energise the Chain, local partners such as United Group, Kazi Farms Ltd, and others, as well as individual donors.

Furthermore, while we are at war with the ongoing pandemic, Footsteps has raised funds for over 100 oxygen cylinders through individual donations, which have already been distributed across seven districts in Bangladesh.

Rafayat highlighted the difference these cylinders and his team have been able to make during such difficult times, saying, “A critical patient in Satkhira required immediate oxygen support and our team was able to reach his house with the oxygen cylinder in as little as ten minutes.” 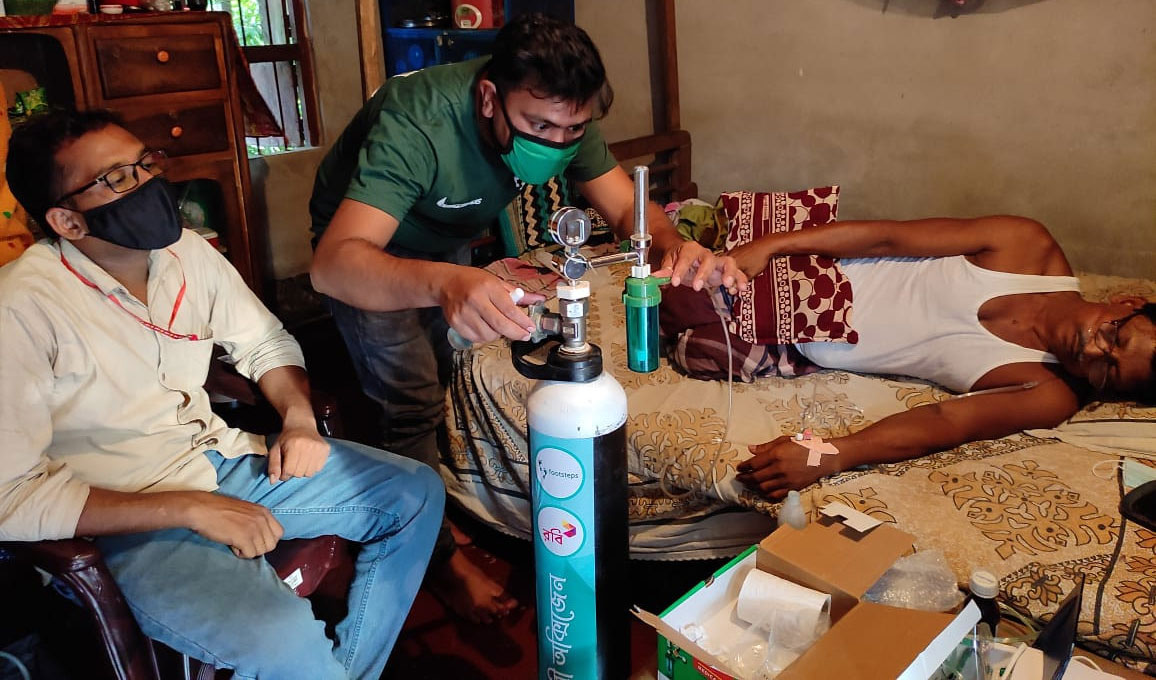 “His personal doctor later informed us that if the oxygen support had not been given within the next five minutes, the patient would not have survived,” he added.

Footsteps has created oxygen banks in seven districts across Bangladesh, where people in need can call for support at any time on any given day.

Their volunteers, who have been trained on this response, rush to the sites with oxygen cylinders to ensure critical patients have oxygen support at the earliest time.

“It is a wonderful feeling to know that your efforts are giving others the opportunity to live a better life,” said Mustain about the other members of the Footsteps team. “To this end, I think I can say this on behalf of everyone else who is working with us that it has been a rewarding experience.”

“The entire team keeps bombarding Rafayat bhaiya with ideas. But he has been very kind and has always encouraged us to find resources to help those in need,” he added.

Aside from being hardworking, everyone on the team has some level of expertise and a great deal of passion to work on projects they are involved in. 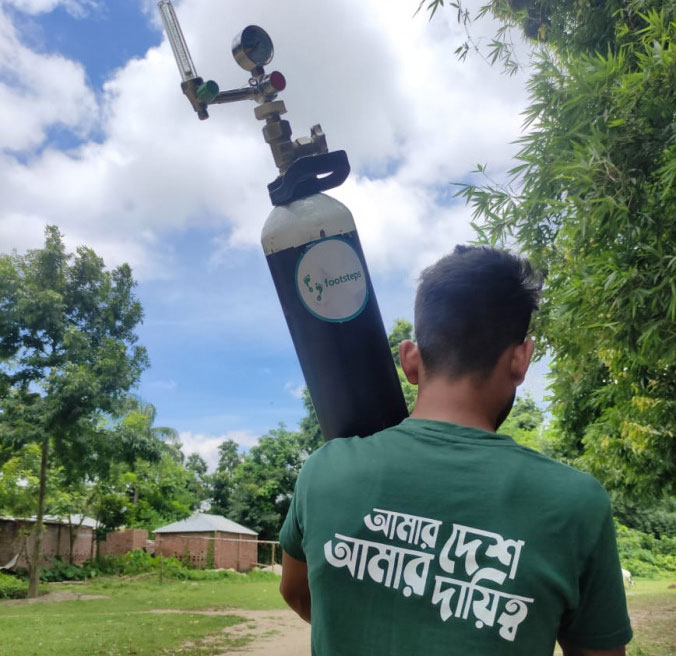 “For example, the DRP is led by Shakhawat Hossain Faisal, who holds a degree on disaster management from the University of Dhaka,” Rafayat stated.

In this regard, Zarin Rashid, a trustee of Footsteps added, “But just because someone is an expert in something, it does not mean that he will stay limited to that area only. The environment Footsteps is as such that everyone has been given the liberty to contribute to any idea they believe they can create or enhance with their knowledge.”

Rafayat is now looking forward to expanding Footsteps’ reach across many more areas in Bangladesh with such a supportive team by his side.

“But we do not want to expand only to show that we have a presence in all 64 districts of Bangladesh. We want to do so in a very sustainable manner,” he added.

“To that end, we want to form proper teams made up of people capable of running our programmes effectively,” he concluded.