Country on a Mission: The Remarkable Story of Bangladesh’s Development Journey

Bangladesh is a relatively young country, having gained independence a little over 50 years ago. Despite its youth, however, the country has made exceptional strides in reducing poverty and boosting shared prosperity over the last five decades.

Sadia Afrin has her eyes squarely set on her dream job. Afrin, who lives in Bangladesh, is combining a passion for graphic design, cartoons, and information technology in the hopes of becoming a professional animator. Just one generation ago, this dream would have rested beyond the realm of possibility.

Growing up, her father was a migrant worker in Saudi Arabia and her mother was a stay-at-home parent.

“I first saw a computer and learned how to operate it at the Dhaka Mohila Polytechnic Institute,” she explains.

It was there that she first learned how cartoons could be created digitally. “It is my dream to visit Japan one day and work in the field of animation,” she says.

Sadia is one of 40,000 low-income female students throughout Bangladesh who has benefitted from the World Bank-supported Skills and Training Enhancement Project (STEP), which has invested in 45 technical institutes to both improve female-inclusion and deliver industry-relevant skills. This project represents one of the many ways Bangladesh is investing in education and jobs—transforming its economy by doing so. 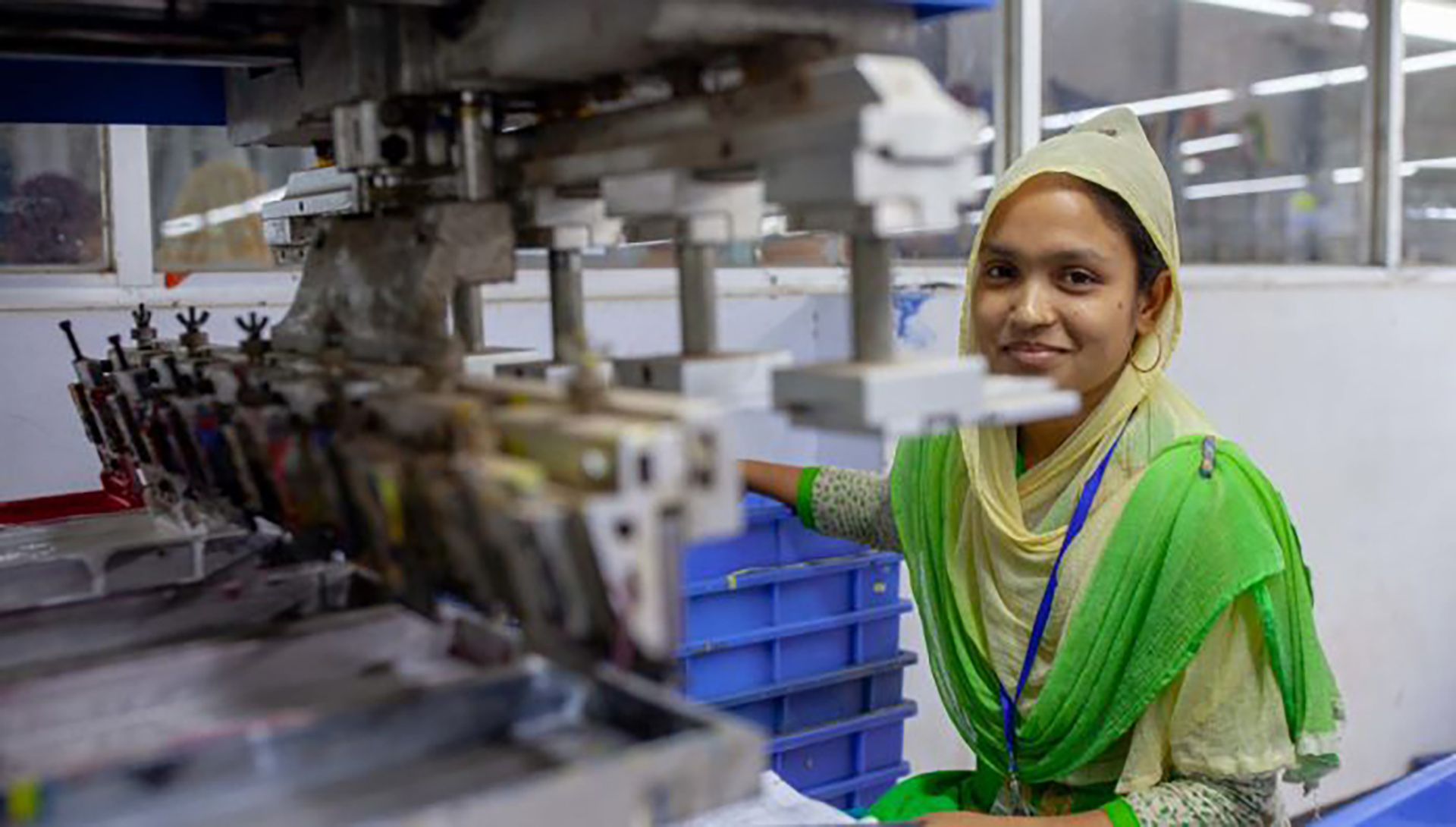 Bangladesh and the International Development Association

‘We have learned so much during our partnership.’

When the newly independent country of Bangladesh was born on December 16, 1971, it was the second poorest country in the world—making the country’s transformation over the next 50 years one of the great development stories.

Since then, poverty has been cut in half at record speed. Enrollment in primary school is now nearly universal. Hundreds of thousands of women have entered the workforce. Steady progress has been made on maternal and child health. And the country is better buttressed against the destructive forces posed by climate change and natural disasters. 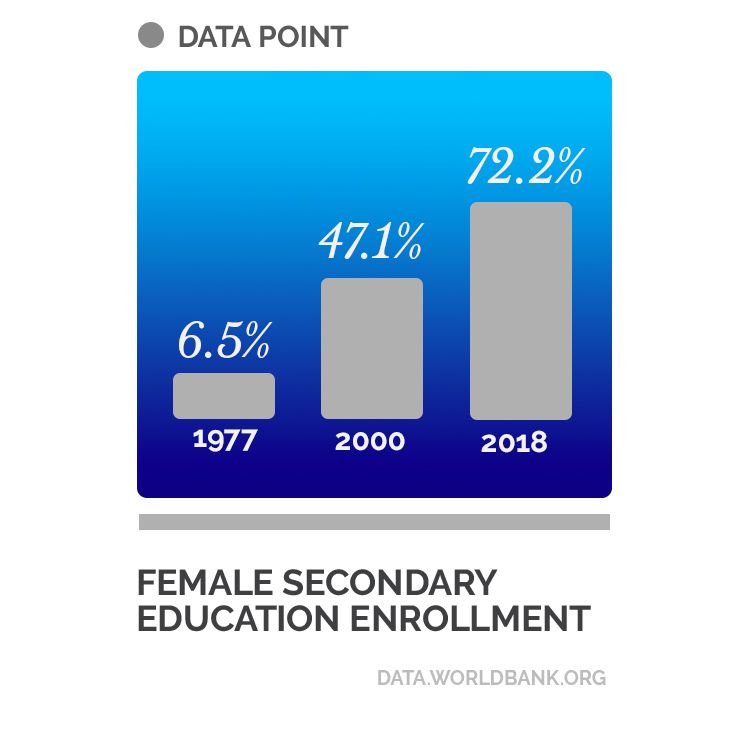 Bangladesh’s success comprises many moving parts—from investing in human capital to establishing macroeconomic stability. Building on this success, the country is now setting the stage for further economic growth and job creation by ramping up investments in energy, inland connectivity, urban projects, and transport infrastructure, as well as prioritizing climate change adaptation and disaster preparedness on its path toward sustainable growth. “With its strong growth performance, Bangladesh is well poised to achieve its vision of becoming a high-income country by 2041,” says Hon.

AHM Mustafa Kamal, Bangladesh’s Minister of Finance. “The World Bank has been a committed partner in our development journey. Its financing and technical support have been important for achieving broad-based development outcomes.”

At the heart of this cooperation between the World Bank and the government of Bangladesh is the International Development Association (IDA)—the World Bank’s fund for the poorest countries—which began its partnership with Bangladesh in 1972 and is now the country’s largest development partner, having committed about $36 billion in grants and zero and low-interest loans in support of 271 projects. Bangladesh is currently the largest IDA-funded country in the world.

“IDA was a young institution when we began working in Bangladesh and we have learned so much about what works—and what doesn’t—during our partnership,” said Mercy Miyang Tembon, World Bank Country Director for Bangladesh and Bhutan.

“The knowledge gained from that experience has, in turn, helped many other countries to reduce poverty and boost shared prosperity.”

Bangladesh has confronted considerable challenges along the way, from the battering of seasonal cyclones to the spread of COVID-19.

As the stories that follow demonstrate, Bangladesh’s progress in the face of these hurdles is a testament to the perseverance of its people and the power of partnerships. 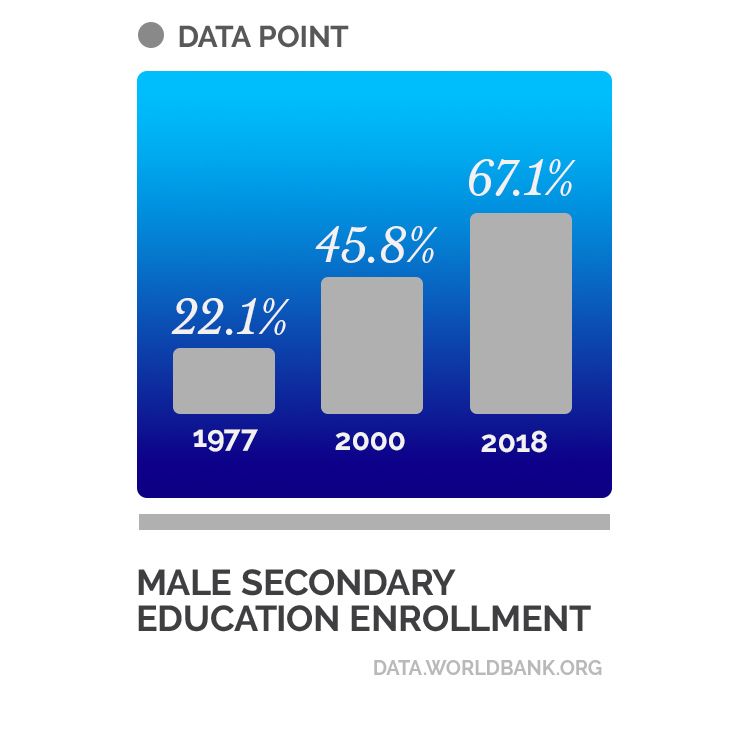 In 2010, millions of young children in Bangladesh were either dropping out of school or entirely missing the chance to even go. Those from the poorest families were particularly absent, often unable to afford uniforms, books, or transportation. In many cases, a need to earn a living for the family overrode education priorities.

With support from the IDA-financed Reaching Out-of-School Children II project, Ananda Schools (‘schools of joy’) cater to these children. The project targets students between the ages of 8 and 14—students who have typically missed the window when children normally attend primary school. A single-class teacher instructs students until they are ready to join secondary school, providing much-needed continuity and support. Stipends, free books, stationery and uniforms help ease the financial burden on their families. And parents—mainly mothers—run school management committees.

The project has been expanded to include children living in city slums, as well as Rohingya children in the Cox’s Bazar district.

Anand Schools are helping put the Government of Bangladesh’s vision of ‘education for all’ into practice.

However, as with virtually every other country around the world, the COVID-19 pandemic is threatening these gains, as schools close to protect students and teachers. In the face of these shuttered schools, the Government of Bangladesh moved quickly to minimize learning losses, introducing a flexible, ‘multi-modal’ approach to remote learning—utilizing television, mobile phones, radio, the Internet, and physical learning packages to bridge any potential learning gaps.

Support from IDA provided stipends and tuition to 4.6 million secondary school students, including 2.6 million girls, to ensure they continued their education during the pandemic.

Looking ahead, Bangladesh has a clear sense of where further work is required to improve educational outcomes for its children and youth. Ongoing efforts are needed to ensure that children from the poorest families, slums, and remote areas are attending school and learning. There is significant room for improvement in literacy and numeracy competencies amongst students and repetition and dropout rates remain significant.

IDA projects are in place to address these and other challenges, as Bangladesh continues to invest in the future of its youth.

The World Bank has brought a combined investment of $776.7 million into the development of Bangladesh’s coastal zone 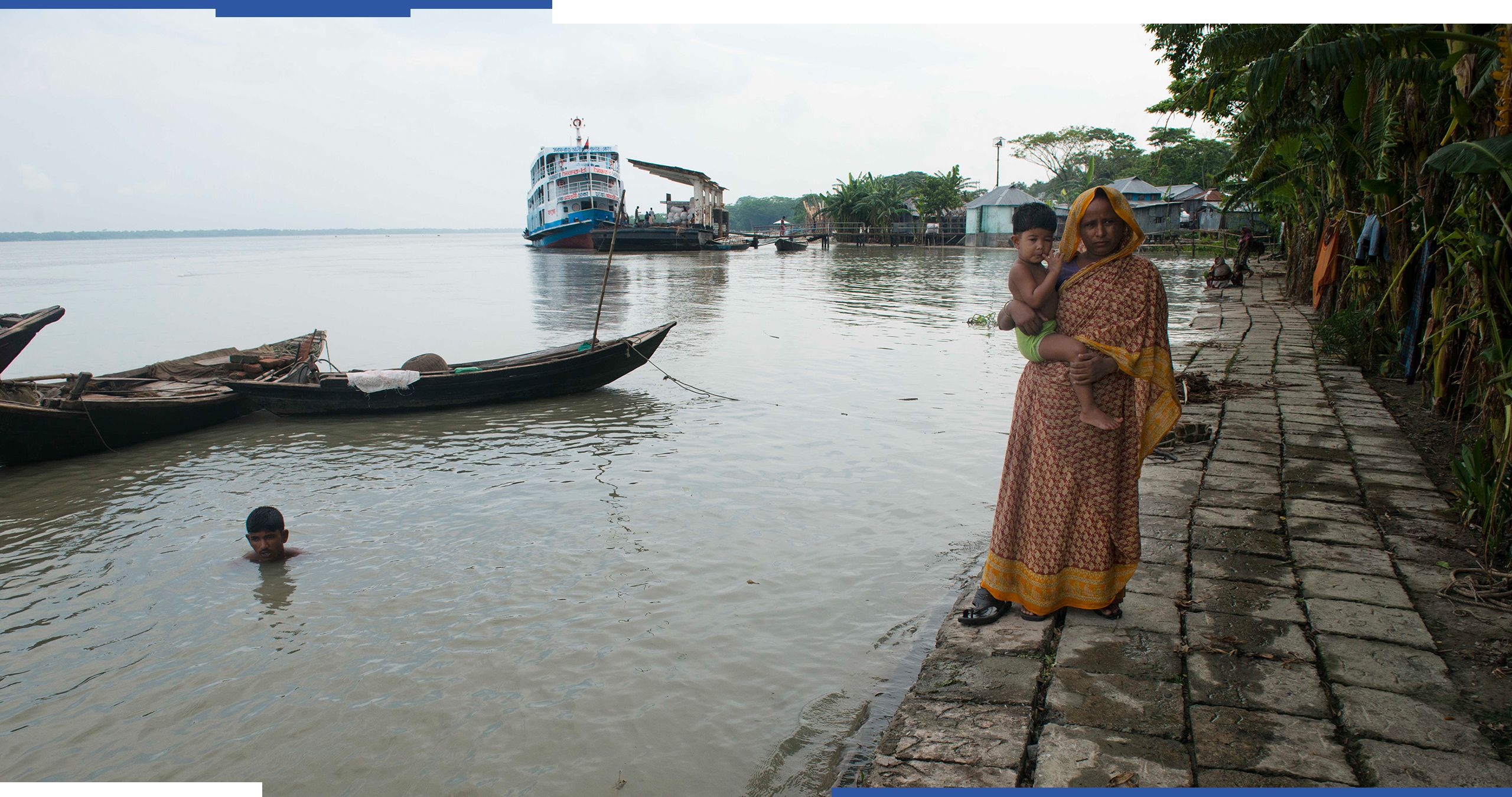 In 1970, on the eve of Bangladesh’s independence, an estimated 300,000 people were killed by Cyclone Bhola. This—and other subsequent cyclones—is a stark reminder of the vulnerability of the country’s coastal regions, home to some 40 million people.

Despite these challenges, Bangladesh has made huge strides in protecting coastal residents from cyclones, storm surges, coastal erosion, and sea-level rise. Since 1970, Bangladesh has reduced cyclone-related fatalities by 100-fold. When Cyclone Amphan struck the Bay of Bengal in May 2020, 2.4 million people were moved to safety—a feat made even more remarkable by the fact that it was carried out during the COVID-19 pandemic.

With support from IDA, Bangladesh is saving lives by building protective coastal infrastructure, including embankments and multi-purpose cyclone shelters that are used as primary schools in during regular weather. While storms are potentially devastating, so, too, are seasonal cycles of floods and drought. 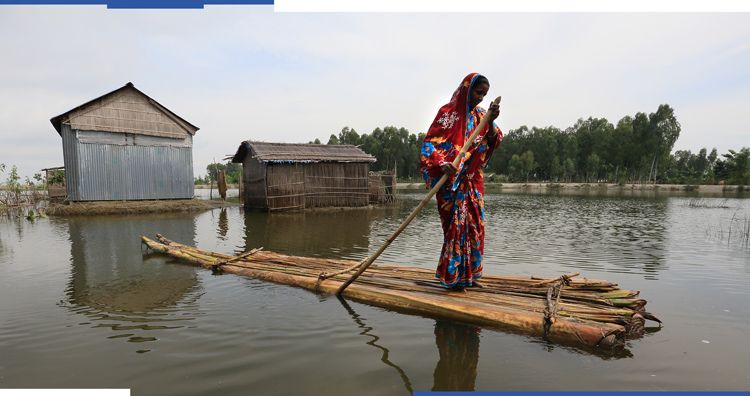 Smallholder farmers, who make up 80 percent of the country’s rural population, are particularly vulnerable.

IDA-financed projects such as the National Agriculture Technology Program (NATP 2) have helped over a million smallholder farmers improve productivity and food security in the face of these challenges. Working hand-in-hand with government agencies and not-for-profit organizations, solutions have been found in a range of new technologies, as well as in adopting practices that go back hundreds of years.

Today, he grows cucumber, gourds, tomatoes, and eggplants, amongst other produce. And his success has prompted neighbors to invest in floating beds as well. One of those is Bipul Mondal, who supplements his income as a carpenter by farming at night. He expects a bumper crop from his 24 floating beds.

“Without the guidance of the local team, I would have been unaware of the crops to grow on the floating beds and how to best construct them,” he says.

‘This road is my first work through e-tendering’

But, the country’s e-GP system has contributed to average annual savings of $1.1 billion, enough money to build over 10,000 km of rural roads or 8,000 primary schools.

Ashraful Alam had finally had enough. As an experienced contractor in a small, northern district in Bangladesh, he would bid regularly for public-work projects. But he became increasingly frustrated with problems of collusion, a lack of transparency, and inefficiency. 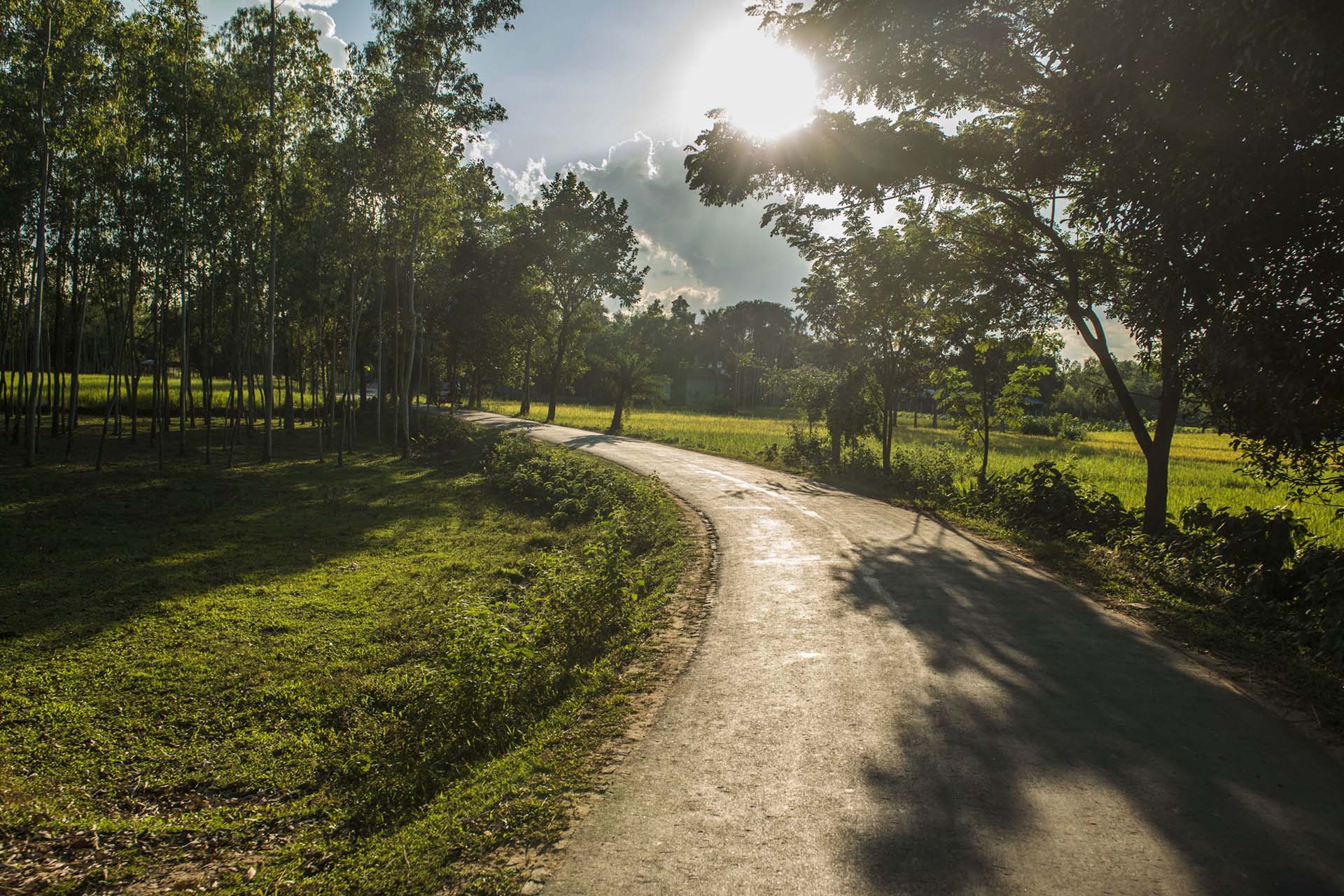 “And so, I left this profession,” he says.

In response to the problems highlighted by Ashraful and countless others, Bangladesh began introducing an electronic government procurement (e-GP) system in 2012. With support from the World Bank, it has transformed the public-procurement process into one that is more efficient, transparent, and accountable.

Although Bangladesh spends about $25 billion on public procurement annually—equivalent to roughly 40% of its annual budget—the country’s e-GP system has contributed to average annual savings of $1.1 billion, enough money to build over 10,000 km of rural roads or 8,000 primary schools.

But the impact of electronic procurement has gone far beyond monetary savings. It has saved an estimated 1,700 million pages of paper annually. By cutting an estimated 170 million kilometers of travel annually, it has also helped decrease about 50,000 tons CO2 emissions each year. And the e-GP system has made doing business easier for private sector bidders, contributing to an increase in the number of registered bidders from 23,000 in FY2017 to more than 80,000 for FY2020.

Alongside the introduction of new technology, the shift to e-GP has entailed a large training and outreach effort. A series of IDA-supported projects have helped build the capacity of public officials on e-GP, engaged citizens in the monitoring of public procurement contracts, and established systems to measure and disseminate procurement performance data through a citizen portal.

The changes have been so significant that they even enticed Ashraful to enter the contracting business again.

“This road, the Kanashakula-Bhuttibhartshala road, is my first work through e-tendering,” says Ashraful, pointing proudly to a stretch of fresh asphalt.

Where to from here?

As remarkable as Bangladesh’s story has been, its most pressing challenges may be found in the chapters to come. The country has set the goals of becoming an upper middle-income country by 2031 and a developed country by 2041.

A laser-sharp focus on strategic priorities is critical to success. Three areas currently guide the World Bank’s partnership with Bangladesh: growth and competitiveness, social inclusion, and climate and environment management. In practice, this means dismantling bottlenecks to growth and stepping-up investment in electricity supply and transport; ensuring that prosperity is broadly shared by building on the gains in human and social development; and enhancing the country’s resilience to natural disasters by improving water and natural resource management and modernizing agriculture.

The Bangladesh and IDA partnership also extends to addressing one of the world’s largest forced exoduses—that of the Rohingya. Bangladesh has shown great generosity as it shelters more than 1.1 million Rohingya people in Cox’s Bazar district until their safe and voluntary return to Myanmar. IDA financing is helping provide health services, informal education and psycho-social support, and helps with responses to gender-based violence, social protection, water and sanitation, and the basic infrastructure needs of both the displaced Rohingya population and host communities.

“As Bangladesh steadily climbs the development ladder, the demands placed on the country’s public institutions become weightier, and strong governance becomes increasingly important,” says Hartwig Schafer, World Bank Vice President for the South Asia Region. “But Bangladesh is not alone as it enters the next stages of its development story—the Bangladesh-IDA partnership will evolve to ensure it meets the needs on Bangladeshis at each step along the way.”