According to its website, text-to-image generation is only one component of a broader apparatus of AI-powered offerings that the company is helping to build.

The startup of a London-based Bangladeshi is currently in talks with investors, who are interested in investing at a valuation up to $1 billion.

The first version of Stable Diffusion itself cost just $600,000 to train, he wrote on Twitter — a fraction of the company’s total funding.

With the image generator Stable Diffusion, you can conjure within seconds a portrait of Beyoncé as if painted by Vincent van Gogh, a cyberpunk cityscape in the style of 18th century Japanese artist Hokusai and a complex alien world straight out of science fiction.

Investment firm Coatue expressed initial interest in a deal that would value the London-based startup Stability AI at $500 million, while Lightspeed Venture Partners then entered talks — which are still underway — to invest at a valuation up to $1 billion.

The London-based startup previously raised at least $10 million in Safe notes (a form of convertible security popular among early-stage startups) at a valuation of up to $100 million, according to sources. Mostaque, 39, comes from Bangladesh and grew up in England. He received a master’s degree in mathematics and computer science from Oxford University in 2005 and spent 13 years working at UK hedge funds. 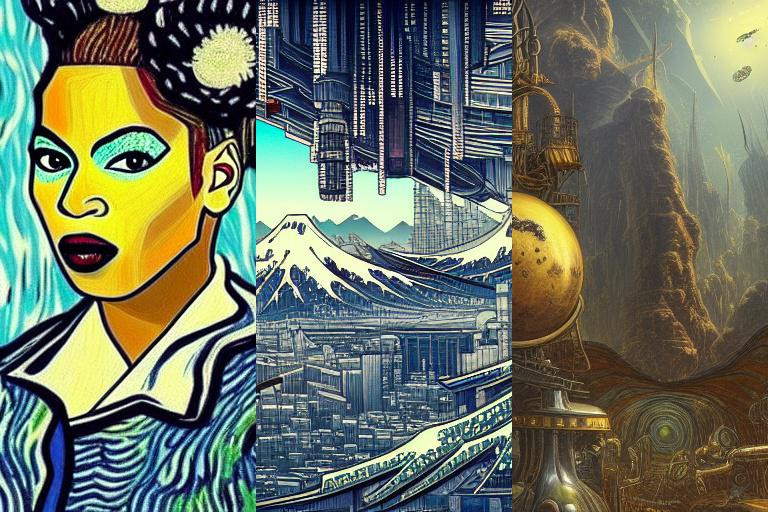 A collage of images made using Stability AI’s online tool, which allows users to create AI-generated images by typing in a text prompt – Collected

In 2019, he launched Symmitree, a startup that aimed to reduce the cost of technology for people in poverty; it shuttered after one year, according to his LinkedIn profile.

He then founded Stability AI in late 2020 with the mission of building open-source AI projects.

According to its website, text-to-image generation is only one component of a broader apparatus of AI-powered offerings that the company is helping to build.

Other open-source research groups it backs are developing tools for language, audio and biology.

Stable Diffusion — created in collaboration with RunwayML, a video editing startup also backed by Coatue, and researchers at the Ludwig Maximilian University of Munich — has generated by far the most buzz among the company’s projects.

Mostaque and his peers have said that the existing technology only represents the tip of the iceberg of what AI art is capable of creating: Future use cases could include drastically improved photorealism, video and animation.

Stability AI has been a for-profit corporation from its inception, which Mostaque has said is meant to allow the open source research to reach more people.

In an interview with TechCrunch last month, he said that the company was fully independent.

“Nobody has any voting rights except our 75 employees — no billionaires, big funds, governments or anyone else with control of the company or the communities we support,” he said.

At a $1 billion valuation, Mostaque would be ceding up to 10% of the company to the new financiers.

Venture capital investors who take significant stakes in startups typically ask for board positions so they can influence the decisions the company is making using their money.