Amid the lockdown, ARK Reepon – founder of ARTcon – came up with the idea of virtual reality (VR) tours of exhibitions and events, which gives visitors the chance to virtually tour art exhibitions and help the agency document the works of artists.

Last year, when everything came to a standstill due to the Covid-19 pandemic, the country’s art scene was badly hit as exhibitions were forced to be postponed as the country went into a nationwide lockdown.

Subsequently, art enthusiasts could not visit art galleries, and renowned art summits and festivals did not take place either.

Amid the lockdown, ARK Reepon – founder of ARTcon – came up with the idea of virtual reality (VR) tours of exhibitions and events, which gives visitors the chance to virtually tour art exhibitions and help the agency document the works of artists and future events.

“BANGABANDHU: Statesman of the Era” was the first mega event curated by ARTcon as a VR and Explore 3D Space tour.

Following the success of the event, ARTcon curated a number of exhibitions in 3D format and “Chobi Mela Shunno” is one of the major events being curated by the agency. 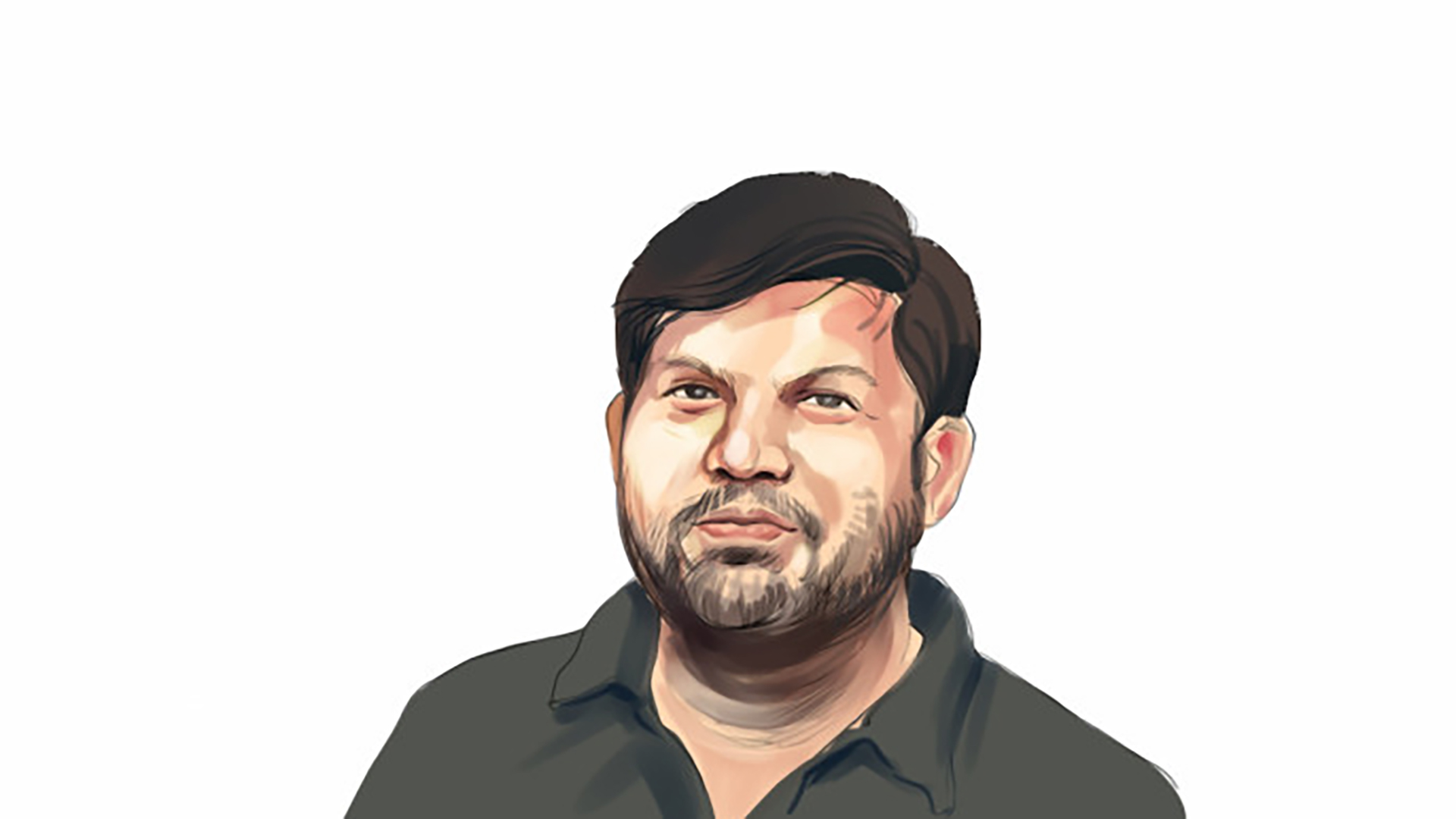 The virtual edition of “Chobi Mela” was launched on 21 February, which was praised by art-enthusiasts from both home and abroad.

This virtual tour allows art enthusiasts to experience Chobi Mela, along with every corner of the exhibition and the Pathshala building, virtually in 3D through the official website of ARTcon till August.

The process to capture art and such a big event like Chobi Mela in VR was not easy.

First and foremost, the VR process requires a good sense of photography, space, architecture and, of course, specialised cameras and scanners.

“Converting any space into VR is a daunting task. My team members and I worked hard to develop the process during the lockdown last year,” informed Reepon. 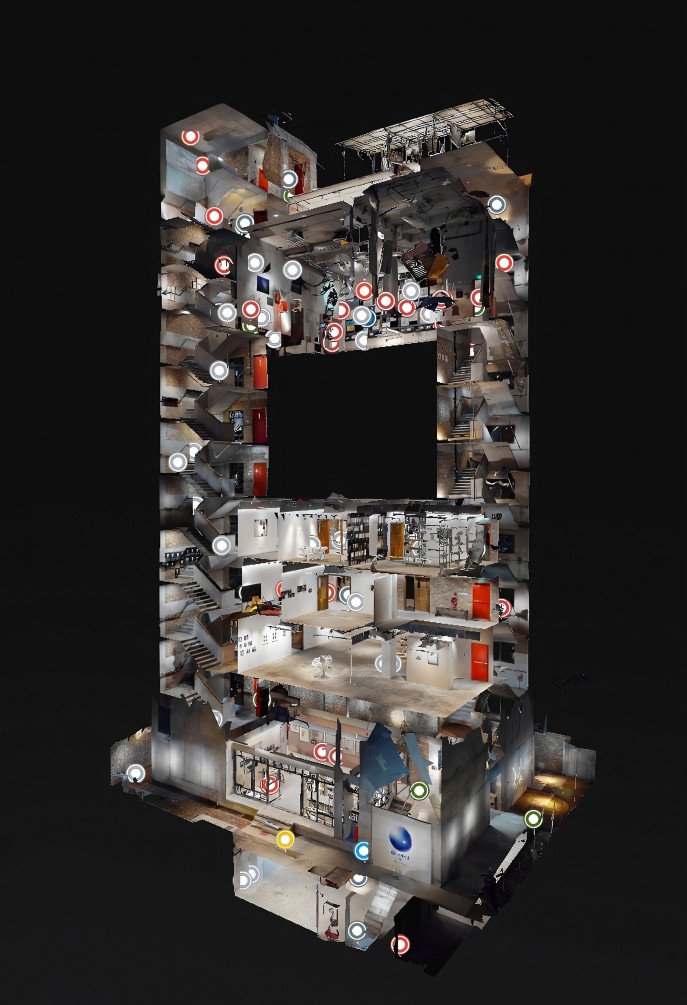 DollHouse’ view of Pathshala building which showcases the layout and space accurately and effectively in 3D. Photo: Courtesy

Reepon explained, “In order to capture everything in VR, you will need special cameras and scanners and a good understanding of using the cameras. Different cameras are required for different angles depending on the time and location. You can’t use the same camera for both day and night shoots.”

“Luckily I have two photographers and a software engineer in my team who bring both technical and aesthetic knowledge to the table and my previous work experience has helped us understand the architectural aspect of any location while capturing the exhibitions,” said Reepon.

He added, “We also have to pay attention to where to add the music, details of the displayed artworks, projection of the gallery or building while editing the captured footage and photos.”

The process is new and Reepon and his team worked hard to develop it. They are confident that this technology is the beginning of a new era that will help them to archive the works of veteran artists.

When Reepon worked at Cosmos Gallery, they wanted to publish a book on artist Shahabuddin Ahmed for which Reepon had to visit France. There, he met Dominique Stal, a book publisher.

Later, when Dominique came to Bangladesh, he observed the Bangladesh art scene and encouraged Reepon to start an art agency for artists, which later became ARTcon.

Initially, Reepon wanted to create profiles of both eminent and emerging artists. With that motto, he has been working simultaneously as an art agent and to create complete catalogues with details of each artwork, archives and, of course, VR exhibitions have become a part of the plans now.

“ARTcon means ‘art consultancy’. Artist Kalidas Karmakar was the first artist to get our services. As an art agent, what I try to do is arrange exhibitions, create catalogues for the artists and in return, ARTcon takes a portion from the artists, depending on whatever they earn from the exhibitions,” Reepon told the correspondent.

“When I first thought of the idea of ARTcon, my vision was to help the artists so they can focus on their artistry. Artists I know and have previously worked initially supported me.” Launched in 2015, ARTcon has traversed a long way and last year, when everything was shutting down, the idea of VR exhibitions and 3D space came to Reepon’s mind. He then shared the idea with his close colleagues and Luva Nahid Choudhury, Director General of Bengal Foundation welcomed the idea enthusiastically. Reepon said, “Executing the idea wasn’t easy. My team worked really hard on this and now the artists or galleries can pay a subscription fee to tour their events in VR from our website, where art lovers can enjoy art shows if they are unable to attend it physically.” 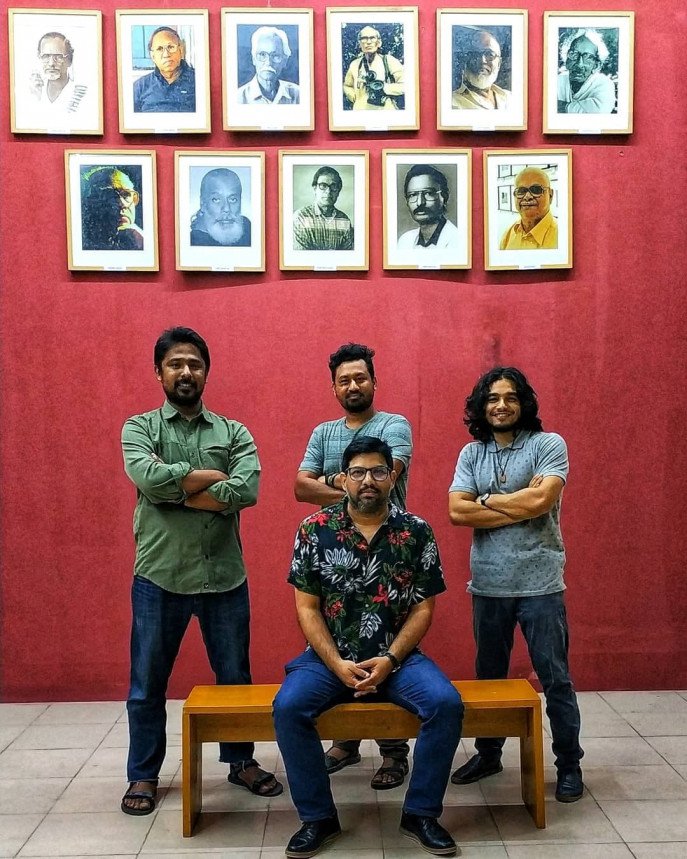 For Chobi Mela, Reepon used cutting-edge technology for creating the VR version of the displayed artworks.

“For Chobi Mela, we converted the Drik building into VR for the audiences so they can explore the entire exhibition exactly as it is in physical format. Now, art lovers can experience the exhibition in 3D virtual space on a computer monitor and experience the audio through VR headsets, or even on smartphones with an internet connection,” Reepon explained.