Forty-one years back, Abdul Alim of Kazipur village adjacent to Harinar Beel in Jashore Sadar upazila was an unemployed youth. He had no capital to do any business either.

But he had an interest in fish farming.

His interest in fish farming motivated him to take a risk. He leased a small pond for Tk1,000. Then he bought fry from fishermen keeping the payment due and started farming the fish.

Abdul Alim made profits from that small pond on 16 decimals of land and developed his business gradually. He built the fish hatchery named Mukteshwari Fish Hatchery.

With the profits from his fish farming, he purchased the land near the Beel at different times over the period and set up the fish farms. 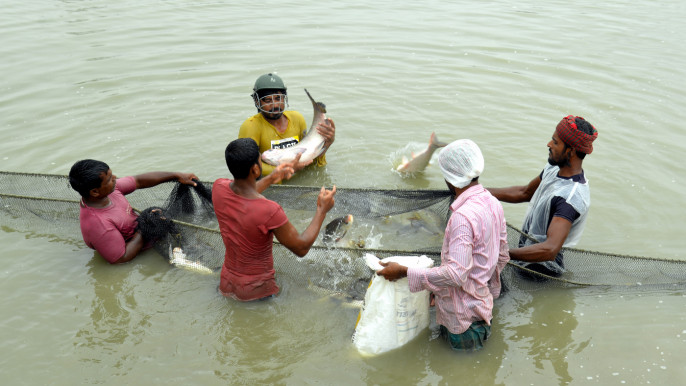 He fattens fish in the ponds and then sells them at various markets, including Baramach Bazar, Basundia and Barobazar in Jashore.

On a visit to Alim’s fish farms recently, fishermen were seen busy fishing, some feeding the fish and others making fish feed. A few workers were catching fish from one pond and then releasing those in another pond.

Abdul Alim told TBS that not all kinds of fish grow well together in one pond. That was why Katla fish were being separated and then released in another pond.

In 2014, he learnt from an NGO in Natore how to fatten carp fish. Then he started fish farming in that way. He has been making good profits by farming fish in this way for seven years.

Abdul Alim said 21 people were employed in his Mukteshwari Fish Hatchery on a monthly salary basis while 10 people worked in his farms on daily wage basis. Apart from those, eight to 10 people also do different other work in his farms.

“Once upon a time, I was unemployed. But now I have been able to generate employment for about 40 people. This is the best achievement of my life,” said Alim.

This fish farmer had become an inspirational example in Jashore, he added.