Kauri village of Harirampur upazila is about 22 kilometres from Manikganj district town. Everywhere you look in the village, every road to every yard of every house, there are trees of different kinds. From fruit trees and wild trees, to medicinal plants, various types of trees can be seen around the village.

For all these, one person deserves the credit most. He is Shahjahan Biswas; for the last 37 years, he has planted at least 70,000 trees in the village at his own expense.

In the village, Shahjahan Biswas, 64, is also known as ‘Gachh Shahjahan.’

In 1976, Shahjahan , who grew up in a family of seven siblings, moved abroad after passing his higher secondary exam. He spent about five years there but then he returned home.

“After passing high school, I spent five years of my career in Singapore and Malaysia. The villages there are beautiful and full of trees. I got my idea of planting trees from there,” Shahjahan said.

He built a vast nursery in the backyard of his house after returning home. Taking plants from the nursery, the trees were later planted around the village.

“In the beginning, I used to buy the plants but then I opened a nursery on the 100-decimal land in the backyard of my house,” Shahjahan added.

The plantation process has not been easy since then. Shahjahan had to spend his own money to first clear the roadsides before a tree could be planted. 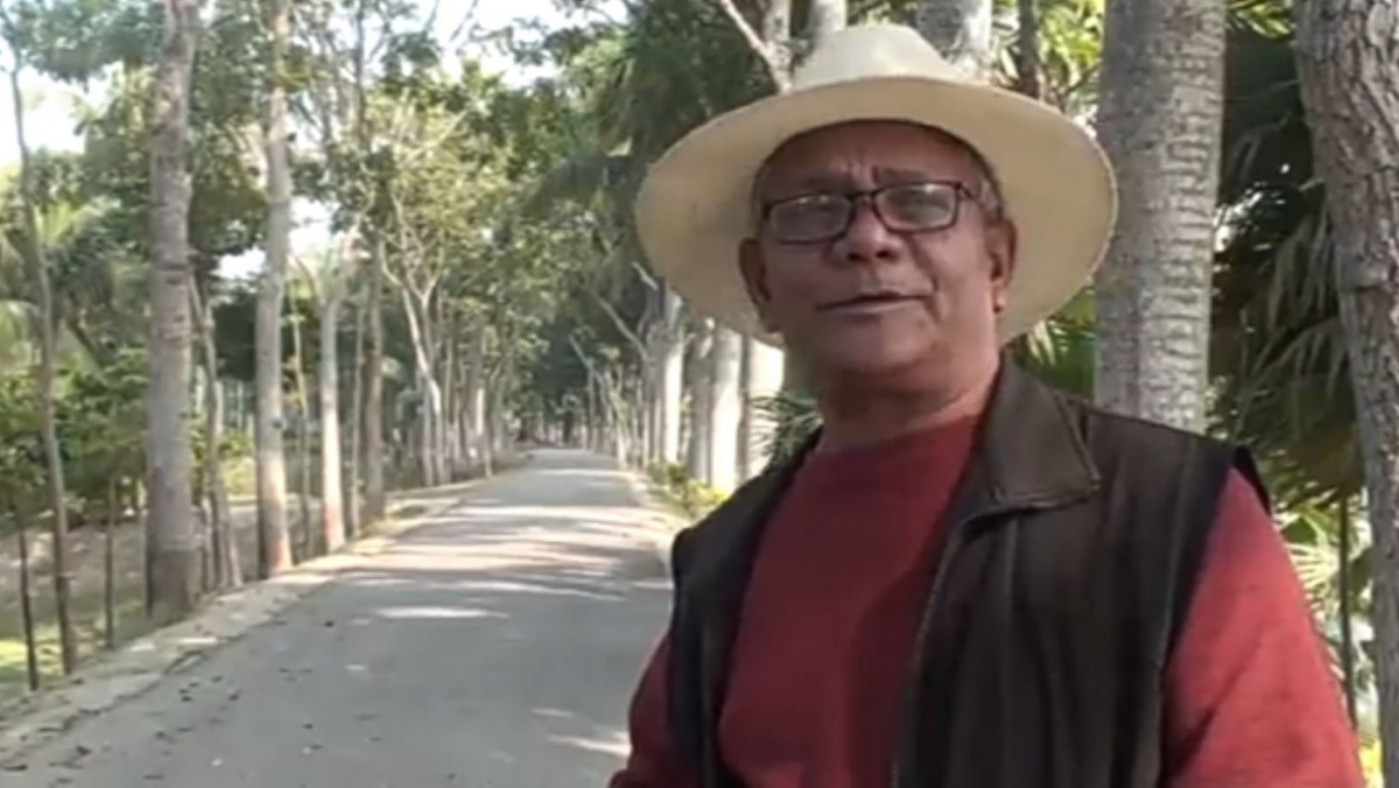 Shahjahan said, “About three decades ago when I used to clear the roadsides before planting trees, people used to sometimes pass hurtful remarks. But now, no one does that and everyone respects what I do.”

Soon after, he started planting trees in the backyards of villagers’ homes, on the premises of religious institutions, schools, and playgrounds.

Shahjahan Biswas said planting trees does not only enhance the beauty of the village, but villagers also benefit financially from this.

According to Shahjahan, the current market value of the tree saplings he has planted in the last 37 years is estimated at around Tk200 crore.

Although Shahjahan plants the trees spending his own money, the trees remain the property of the owner of the land they are planted in. Shahjahan never wanted to profit from the trees he planted.

When asked how he finances the campaign, Shahjahan said that “My nieces and nephews are citizens of developed countries and they send me money for monthly expenses and that covers the cost of planting.”

Shahjahan has his businesses as well, so he never needed any government or non-government assistance for planting trees. Shahjahan also never married and does not have a family of his own, so he can invest as much time as needed for the trees.

This tree planting campaign has now spread beyond Kauri village. Shahjahan Biswas has planted several trees in nearby villages. He does not only plant the trees, but also takes care of them. He has a few permanent workers who help him take care of the trees.

Shahjahan’s story about planting trees has gone on to motivate many. People from nearby villages are now interested in planting trees and they can count on Shahjahan to provide free advice any time they need it.

Fatema Khatun,headmistress of Sonakanda Government Primary School, said the entire village of Kauri and its surroundings is full of greenery because of Shahjahan Biswas.

“Even in his old age, he walks to different parts of the village and plants saplings in empty spaces,” Khatun added.

Daud Hossain, a teacher at M A Rauf Degree College, said Shahjahan plants trees at his own expense on fallow land in the village but has never profited from the trees.

Hossain commented that the trees are helping villagers to become financially stable. “The villagers sell the trees which in turn is helping eradicate poverty from the village,” he added.

“If there is one Shahjahan in every village of Bangladesh, this country will go a long way,” Hossain hoped.

Shahjahan hopes that he can spend the rest of his life doing what he does best – planting trees. He has also urged everyone to plant trees to ensure their well-being, happiness, and most importantly, to protect the environment.

“If you give Tk500 to someone in need, they will spend it on worldly requirements. However, if you invest that same amount of money on trees, they will grow up to become valuable assets,” Shahjahan commented.